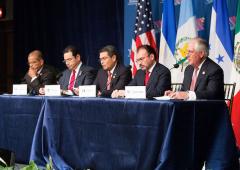 July 25, 2017
Republicans have been some of the most vocal critics of Trump’s proposed cuts to humanitarian aid in Central America.

July 20, 2012
On January 11, 2012, Beverly J. Oda, Canada’s former Minister of International Cooperation, announced that the Government of Canada would be committing $19.9 million to the resettlement of 5,000 families, who were left homeless and were living in the internally displaced camp in Champs de Mars. She also remarked that “If all we do is clear the Champ de Mars, we will have failed.”

SOVIET COLLAPSE NOT SO RELEVANT

Post-War Aid: What Kind and Who Decides?

A PROFILE OF FOREIGN AID