After winning the 2018 election on an anti-corruption campaign, President Bolsonaro’s popularity has plummeted due to accusations of corruption during the pandemic. 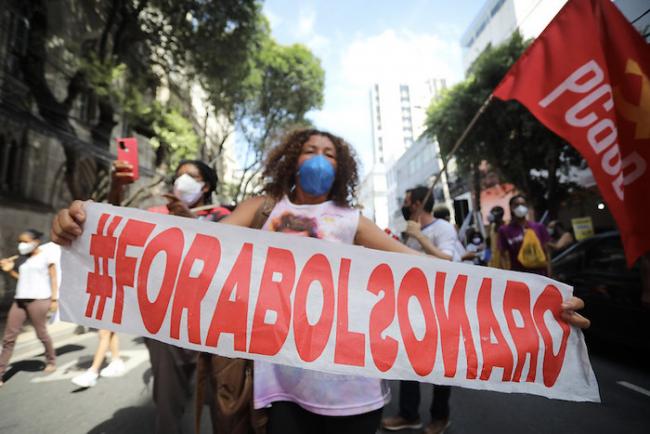 In Brazil, the country with the second highest Covid-19 death toll in the world, the political scene is currently focused on a single room in the Senate. For three months, that is where senators have accumulated evidence of Health Ministry negligence in offering vaccines to the population and other governmental missteps during the coronavirus pandemic, such as recommending chloroquine for Covid-19 treatment.

Brazil’s ruinous management of the pandemic led to thousands of avoidable deaths. As investigations intensify, there are more and more accusations, denials on top of denials, and fights between opposition members and Bolsonaro loyalists. Every day, this endless ball of thread further unravels the narrative of a government that claims to be free from corruption.

Far right President Jair Bolsonaro capitalized on anti-corruption fervor to win the 2018 elections. He rode a wave of popular dissatisfaction after exaggerated allegations of corruption took down the previous center-left government of Dilma Rousseff and politicized investigations jailed the likely 2018 frontrunner Luiz Inácio Lula da Silva. And Bolsonaro nearly won in the first round when he received almost 50 percent of votes. But two and a half years into his presidency, overpricing schemes for Covid-19 vaccine doses are further undermining his anti-corruption claims, inflaming protests, and bolstering calls for impeachment.

In April, the Brazilian Senate formed a parliamentary inquiry commission, known as CPI, probing the government’s disastrous response to the coronavirus pandemic. In late June, evidence emerged that the Health Ministry overpaid for the vaccine produced by the Indian laboratory Bharat Biotech.

In the Covid-19 CPI, public officer Luís Ricardo Miranda, head of imports at the Health Ministry, denounced inconsistencies in the Covaxin contract and “abnormal” pressure to sign the contract. According to Miranda, the invoice had to be amended three times to correct the numbers and included an advance payment of $45 million to a company that was not the Indian manufacturer, but an intermediary based in Singapore.

Faced with these irregularities, the whistleblower informed his brother, a lawmaker aligned with Bolsonaro, about the case. His brother, who is also named Luís Miranda, said he went personally to Bolsonaro and reported the corruption in the ministry. According to the Miranda brothers, the president said that he knew who could be involved in the case, mentioning the name of the government whip in the Lower House, Ricardo Barros, and promising a federal police investigation.

However, Bolsonaro did not contact the police or any government financial control agency at the time. Barros still leads Bolsonaro’s bloc in Congress and frequently meets with the president. He represents centrist parties in Congress that support the president in exchange for space in the government and funds for their electoral bases.

The February contract detailed the purchase of 20 million doses of the Indian Covaxin vaccine for an equivalent of $323 million. At the time, this was the most expensive vaccine among those contracted by the government. The price was 10 times higher than what the manufacturer had announced six months earlier.

President Bolsonaro not only knew who was responsible for the scheme, he promised to investigate and did not follow through.

Despite repeated offers made by the American pharmaceutical company Pfizer in 2020, the Brazilian government delayed purchasing the Pfizer-BioNTech vaccine, saying it would only make a deal with already approved vaccines. However, it made a deal with the Indian laboratory in record time, before the immunizer had the approval of the Brazilian health regulatory agency Agência Nacional de Vigilância Sanitária (Anvisa). The Pfizer process took 330 days, while the Covaxin agreement was reached in 97 days.

Health Ministry officials also claimed that, at $10 a dose, the Pfizer vaccine was too expensive, but Covaxin cost $15 per dose. This was before the phase 3 clinical trial, which measures effectiveness, was even published. In addition, the contract was made without attending to a set of 10 recommendations made by the legal counsel. In February, officials said the first 8 million doses would arrive in March, another 8 million in April, and the last 4 million in May. At the time of writing, no doses have been delivered, due to restrictions from Anvisa and other problems.

On June 23, the CPI levied accusations of corruption. The government’s attempts to disqualify that allegation failed when the documents presented to refute accusations of irregularity were proven fraudulent, with spelling errors in English and evidence of montage.

Days later, the government changed its strategy, finally ordering an investigation by the federal police. However, the Attorney’s Office, led by a Bolsonaro supporter, has already mentioned the lack of evidence of crimes committed by the president, even before opening the case.

In his defense, Bolsonaro also stated that “he doesn’t know what happens in all the ministries,” a claim that contradicts previous statements emphasizing his authority over everything in his administration. On June 29, Health Minister Marcelo Queiroga suspended contracts with irregularities. 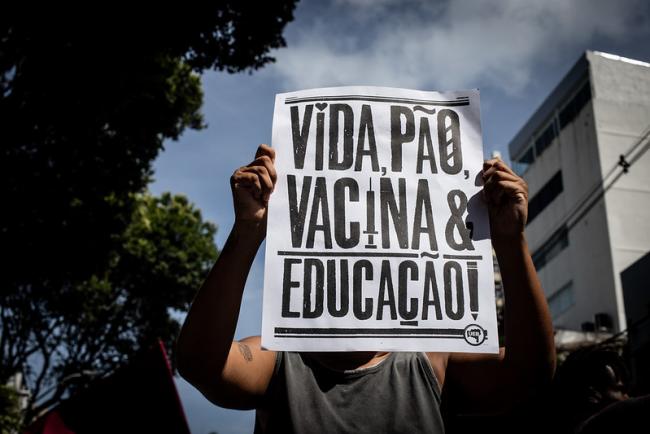 Bolsonaro came to power with a promise to fight corruption after Operation Car Wash. Disbanded in early 2021, the Car Wash investigation was one of the largest initiatives to combat corruption and money laundering in Brazil’s history, though it had its own fair share of controversy. The operation began by investigating money laundering and ultimately uncovered the international Petrobras corruption scandal, which involved hundreds of people around the world, from high-ranking politicians to important businessmen.

In Brazil, Operation Car Wash investigated more members of the Progressive Party than any other. From 2005 to 2016, Bolsonaro was in Barros’s Progressive Party. In 2018, former President Lula da Silva of the Worker’s Party (PT) was arrested as a result of the investigation. However, this year, the Supreme Court overturned the charges, ruling that Judge Sergio Moro, responsible for the conviction, was biased and colluded with the prosecution. Moro was appointed Minister of Justice at the beginning of Bolsonaro’s term; he stepped down in April 2020.

After two and a half years in office, Bolsonaro is experiencing his worst crisis yet. The Covaxin case is not the only investigation of irregularity in medical supply procurement during the pandemic. In 37 sessions, the CPI revealed that there are more accusations and scandals, including signs of bribery and overpricing between intermediary companies and the Health Ministry.

While the investigations may not lead to legal consequences for the president, the scandals damage his image and weaken his standing in the 2022 electoral race. He is likely to face Lula, a strong competitor whose support in the polls has grown since the charges against him were scrapped.

Bolsonaro turned a blind eye to suspicions of bribes and overpricing, which is at odds with the threats he made about anyone caught committing irregularities in his government. Previously, Bolsonaro defended violent methods, saying that he would put ministers involved in corruption in the “pau-de-arara,” a torture technique used in Brazilian dictatorship between 1964 and 1985. He also said that he would “kick the neck” of anyone who committed any crime in public administration. Bolsonaro has most often directed his rage at journalists.

Despite his harsh rhetoric against corruption, Bolsonaro insists that in the Covaxin case there were no irregularities because the purchase did not actually take place. However, he ignores that funds had already been reserved for Covaxin. The crime of corruption is not only receiving an undue advantage, but also requesting or accepting the promise of such an advantage. Bolsonaro admitted that there are people “with a financial interest” in the Health Ministry because of the large budget available.

Bolsonaro has been criticized by the Left since the start of his campaign, but he is now losing support from segments that had previously stood by him, including right-wing and center-right groups that led protests in favor of the impeachment of former President Rousseff in 2015.

For example, Congress member Joice Hasselmann of the Social Liberal Party (PSL) emphasized that she would “never again” vote for Bolsonaro, even under threat. A former government whip in the Lower House, Hasselmann broke away from the Bolsonaro bloc in the first year of his administration and joined the opposition.

“I was the first one on the right-wing to leave when his popularity was soaring, and I apologize for helping his election,” she said. 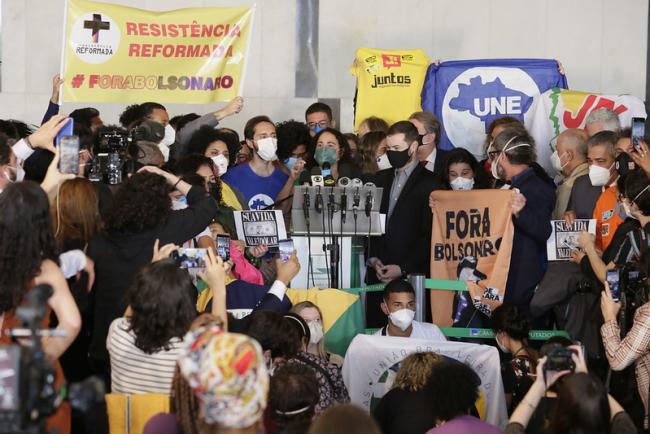 The Covaxin scandal developments have also fueled protests in the streets.

“The street movements will grow and we will have to welcome groups that made a mistake in supporting Bolsonaro,” said Magno Karl, director of a right-wing movement that joined left-wing protests calling for the president's impeachment.

Social movements have also been demanding Bolsonaro’s impeachment. Civil society movements and party leaders signed a letter to Congress that lists more than 20 crimes committed by the president. However, their efforts might be once again ignored by the speaker of the Lower House, Arthur Lira, a Bolsonaro ally from a center-right party.

“The Bolsonaro government is very profitable for several deputies, in the sense that they gain access to budget resources for their electoral strongholds. This means that political elites are not interested in overthrowing the president,” said Mayra Goulart, a political scientist from the Federal University of Rio de Janeiro.

As he loses voters, Bolsonaro has repeated threats to cancel the upcoming presidential elections and created conspiracy theories about the Brazilian electoral system—the same one that elected him in 2018 in the second round. He also continues to claim that he was elected in the first round vote as opposed to the run-off, but he has never proved any fraud to sustain his arguments.

For analysts, this Bolsonaro maneuver doesn't make sense because restructuring the electoral system is not a simple process. According to Goulart, it requires the approval of more than 300 of the 513 deputies, the majority of whom do not support the idea.

Despite a decrease in popularity, Bolsonaro is still the presidential candidate with the highest number of followers on social networks: 40 million, according to the big data analytics platform MonitoraBR. Lula, his main rival, has 10 million followers on social networks. While not reflective of the full picture, these numbers are not insignificant.

“Digital militancy has always been a safe haven for Bolsonaro since before the 2018 elections,” said political scientist Max Stabile, adding that studies show that followers on social networks tend to be “very loyal voters.”

Though Bolsonaro’s popularity has plummeted, Stabile says support on the networks, at least for now, could help ensure the president's shot at reelection.

Lobato Felizola is a Brazilian journalist who has been living in Europe for over five years. He has contributed to media outlets such as The Progressive and Protean Magazine, always focusing on political and environmental issues.