Venezuela and the U.S. Left at a Crossroads

The U.S. Left’s natural allies in Venezuela are the activists and grassroots movements fighting for the rights of workers, Indigenous peoples, women, and LGBTQI+ communities. 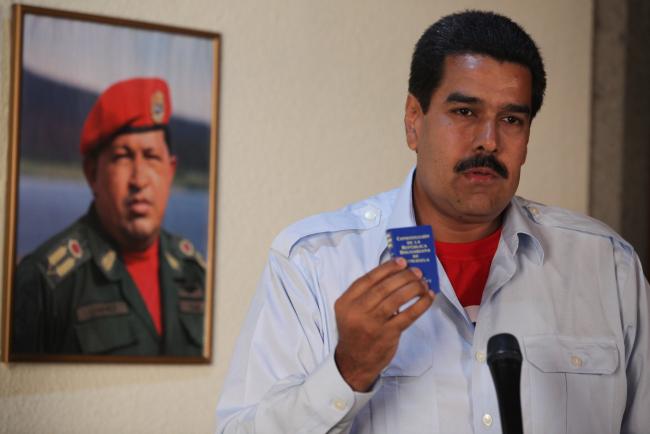 When the subject of Venezuela is brought up, there are often two distinct narratives. In the right-wing and much of the mainstream media, Venezuela is often depicted as a once vibrant, thriving democracy that has been ruined by socialism. Meanwhile, in certain left-wing circles, the country’s many troubles are blamed solely on U.S. economic sanctions, while the government is depicted as a David leading a heroic resistance against an imperial Goliath.

Both storylines bear some ugly similarities: they both cheat the reader by denying him or her the knowledge of Venezuela’s complex political history, key aspects of the country’s economic reality, and the heterogeneous nature of the anti-Maduro opposition. At best, these narratives offer a one-sided portrayal with the perceived heroes and villains acting in a manner that conveniently matches the preconceived notions of the politicians, pundits, and activists promoting them. At worst, they depict Venezuelans as passive victims of either a brutal regime or an imperial power. These fatalistic, self-involved narratives cast ordinary Venezuelans as spectators with no control over their own destinies.

For the Venezuelans critiquing the Maduro government from the left and calling for a different, more democratic alternative to imperialism and neoliberalism than what the Bolivarian Revolution has produced, the conversation must go beyond such reductive talking points. The Partido Socialism y Libertad (PSL), a small left-wing Venezuelan political party, argues that, rather than trumpet a distorted anti-imperialism to justify support for Maduro, the international Left should align with Venezuelan workers. Flashpoints like the recent controversial visit to Venezuela by a group of members of the Democratic Socialists of America (DSA) lay bare how the PSL—and likeminded independent leftist groups—diverge from both the government and the right-wing opposition. The sectors of the international Left supporting Maduro, they argue, would do well to similarly break ranks.

Challenging Chavismo from the Left

While the late Hugo Chávez and Nicolás Maduro are often depicted as militant leftists and socialists, this is not how they are seen by many people who comprise the independent, anti-Chavismo Left in Venezuela. “Some sectors of Chavismo have broken with Maduro over his reactionary politics,” explained Simon Rodríguez Porras, a member of PSL. Although some call for a return to the original Chavismo, in Rodríguez Porras’ opinion, that too was flawed. He recalls, for instance, how preferential exchange rates for certain industries effectively subsidized General Motors to the tune of $6 billion under Chávez. The company left Venezuela in 2017 after authorities froze its assets.

According to Rodríguez Porras, co-editor of venezuelanvoices.org and co-author of Why did Chavismo fail?, the Chávez and Maduro governments have given political expression to an emergent bourgeoisie. While these governments forged deals with big corporations in oil, gas, and other sectors, they pursued anti-worker policies that undermine independent labor unions and prospects for a living wage for ordinary workers, Rodríguez Porras said. For instance, amid crippling U.S. sanctions barring Venezuela’s state oil company from accessing international markets, the Maduro government has worked with Chevron, one of the few foreign oil companies to remain in Venezuela, to keep its operations going.

For Rodríguez Porras, past achievements by labor unions in Venezuela occurred despite, not because of, the actions and policies of the Maduro and Chávez governments, which he characterized as corrupt. For example, the National Union of Workers (UNETE), a union confederation that emerged in 2003, carried out successful militant labor actions, including leading a regional general strike in Venezuela’s Aragua State during the Chávez years.

“UNETE-Aragua became a national reference point for the labor movement,” Rodríguez Porras said. The union carried out numerous solidarity strikes to defeat layoffs or to demand better wages and safe working conditions. In November 2006, UNETE workers also spearheaded a worker takeover of the bathroom ceramics factory of Sanitarios Maracay. But the “most important experiment in worker’s self-management,” as Rodríguez Porras put it, suffered pressure not only from the former factory owner, but also the government, which responded with repression. The strikes paralyzed the state of Aragua. However, in 2008, UNETE-Aragua leaders Richard Gallardo, Luis Hernández, and Carlos Requena were assassinated.

“After the assassinations, two regional strikes were conducted by the UNETE-Aragua unions, with dozens of roadblocks and massive participation,” Rodríguez Porras said. “The main demand was justice for our comrades.”

But investigations “went nowhere,” he said, adding that members of the commission charged with probing the killings reportedly “stopped participating after they received death threats.” Despite these and other killings of union members, President Chávez wrote in his newspaper column “Las Lineas de Chavez” in 2010 that there had been no union leaders killed in Venezuela.

According to Orlando Chirino, national leader of the union C–cura, government repression of unions and other popular movements has worsened under Maduro. Anti-government protests in 2017 faced harsh repression, with more than 160 left dead. Then, in 2019, Memorandum 2792 eliminated the right to strike and collective bargaining over work conditions. Chirino notes that dozens of workers, students, and human rights activists have been fired or imprisoned for mobilizing and demanding public services, participating in strikes, defending their rights, or denouncing government corruption.

In August 2020, Venezuelan Workers Solidarity, self-described as a group of socialists residing in the United States, demanded the release of “all workers imprisoned for engaging in struggle in defense of their rights, regardless of their political affiliation.” The statement also called for justice for workers, students, peasants, and other activists who have been murdered or otherwise harmed when engaging in protests, strikes, land repossessions, and other actions.

“Nicolás Maduro’s civil-military regime launched an offensive against the working class in 2014, deepening the policy of criminalization of social struggles undertaken by Chávez in 2007,” VWS wrote.

Against this backdrop, the International Committee of the Democratic Socialists of America sent a delegation to Venezuela to attend the government-organized Bicentennial Congress of the Peoples this past June. The delegation met with Maduro and Foreign Minister Jorge Arreaza. The DSA, one of the largest leftist groups in the United States, is divided on the question of whether to support or oppose the Maduro regime. In Venezuela, the move prompted criticism from anti-Maduro leftists.

Groups like VWS oppose the narrative that the situation in Venezuela is a zero-sum game where you either support neoliberalism or the Maduro government. They argue that the Maduro regime is kleptocratic, capitalist, repressive, and unworthy of support from international leftists in the United States or elsewhere.

“The Chavista government evidently benefits from denying or disowning any leftist dissidence, while it is convenient for right-wing sectors to converge in affirming that Chavismo represents the entirety of the left and socialism in Venezuela,” VWS wrote in an open letter ahead of the DSA visit. “But opposition to the government is broad, and it includes millions of Venezuelans who do not identify with the government or with any of the traditional pro-US opposition parties. It includes leftist sectors.” VWS invited DSA members to meet with relatives of workers who are currently political prisoners, Venezuelan leftists, or critical Chavismo activists. The delegation opted for the government-guided tour instead.

While Rodríguez Porras acknowledged that there are “different currents” within the DSA, he said the visit “generated the perception that [the DSA] is aligned with a government that violates the rights of workers, women, and Indigenous people and supports police brutality, torture, and political persecution.” It’s the leftist opposition, he said, that defends “the rights of workers, indigenous peoples, the LGBT community, and women in the face of government attacks.”

The DSA International Committee’s stance on Venezuela remains mostly focused on criticism of U.S. sanctions and U.S. recognition of Venezuelan opposition leader Juan Guaidó as interim president. However, the delegation and other elements of the DSA have at times made statements that were more critical of the Venezuelan government. For example, in a statement in January 2019, the DSA said “both the increasingly top-down Venezuelan government as well as the fractious Venezuelan opposition…bear significant responsibility for the current crisis and there are important critiques to be leveled against both.” However, the main focus of the statement was to oppose U.S. intervention “to help the Venezuelan people defend the gains made during Hugo Chávez’s presidency.”

Chirino, the union leader, expressed regret that the DSA missed the chance to confer with sectors of the independent Left in Venezuela, but remained optimistic that the visit had still opened space “for debating international politics and its importance for the US left” and to “reconsider what a policy of internationalist solidarity with the Venezuelan people should be.”

On the ground, the path forward remains unclear. Rodríguez Porras said the PSL and other elements of independent Left in Venezuela have a different vision for the country than the right and center-right opposition to the government. One area where the opposition movements differ in opinion includes their approach to the upcoming regional elections. Sectors of the opposition, led by Guaidó, recently reversed their three-year strategy of boycotting elections, agreeing to participate and negotiate with the government. But the PSL and other members of the Left opposition have rejected what Rodríguez Porras calls an electoral farce. He accused the government of not only using dirty tactics—taking over dissident parties, persecuting dissident candidates, threatening to deprive voters of government-distributed food boxes, and miscounting votes—but also undercutting candidates and parties that prevail in elections. The creation of “parallel authority,” such as the naming of “protectors,” he said, ensures dissenting officials are left “without a budget or any real power.”

“Venezuelans have experienced this many times and are not enthusiastic about voting to legitimize a new fraud,” he added. “We think that most people would mobilize and defend the right to vote if it meant being able to use the vote to reject the whole state of affairs.”

Instead of participating in elections, the PSL and other sectors support a recall referendum. In 2016, after taking control of the National Assembly, the opposition set its sights on a recall referendum in hopes of forcing Maduro to step down. But the country's electoral council suspended the process before it could go to a vote, citing fraud in the campaign's preliminary petition. More than a decade earlier, Chávez survived a recall vote in 2004. According to Venezuela’s constitution, a recall referendum can only be held after the halfway point of a president’s six-year term—a threshold Maduro will cross in 2022.

In the meantime, Rodríguez Porras urges the U.S. Left to embrace an internationalism that stands in solidarity with the working class oppressed not only by imperialism, but also by its own national government. Opposition to U.S. sanctions and condemnation of the Maduro government are not mutually exclusive. Ongoing support for pseudo-progressive “bourgeois governments,” he argues, demonstrates “large doses of ignorance, racism and arrogance,” together with an “absolute disdain for the struggles and aspirations of the workers and the people.”

The situation in Venezuela is dire and the U.S. Left has a responsibility to dispense with an anti-imperialism that indulges in selective outrage and double standards. The Venezuelan activists and movements fighting for worker’s rights, LGBTQI+ rights, women’s rights, and Indigenous rights deserve the Left’s steadfast support and solidarity.

Andy Heintz is the author of the book Dissidents of the International Left.