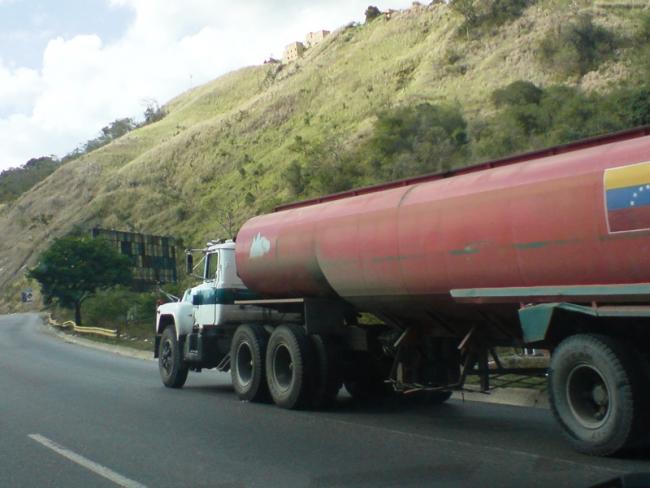 Despite Venezuela’s seven-year-old economic crisis and restrictive pandemic-related measures, the city of Caracas appears relatively calm. It might appear that gasoline shortages that have caused many challenges in recent years have lessened compared to the beginning of last year.

But in regions outside the capital, which have always borne the brunt of the crisis, are experiencing a new problem that Venezuelans, even in the worst moments, haven’t faced before: diesel shortages. They are like a tsunami whose magnitude many don’t yet recognize.

Paradoxically, the economic liberalization measures that President Nicolás Maduro has introduced since 2018—such as ending currency and price controls, eliminating taxes on imported goods, and strongly supporting de facto dollarization—have eased the pressure of food shortages and hyperinflation. This comes amid a state of affairs that oscillates between economic stabilization and the dismantling of social achievements.

The decline of the oil industry forced the country to find new sources of income, such as remittances, gold mining, and crypto-mining, as well as other non-traditional activities that are turning the page on the country’s total dependence on the oil industry. A post-petroleum Venezuela is being born, though without any kind of industrial development.

Even the opposition living in the country recognize that, poverty aside, the economic and political tension of previous years is no longer. Although the country has not overcome the crisis, it has managed to achieve greater economic stabilization in spite of the significant paralysis of the state oil company, PDVSA. Hyperinflation has eased and basic products are in supply.

But in reality, as a Spanish saying goes, the turmoil happens below the surface. The surprising diesel scarcity poses the question: why have the shortages of this fuel and its impacts happened now, after so many years of economic and gasoline crises?

Venezuelan life is totally dependent on diesel. Transportation of food, medicine, various goods, and passengers almost completely use this fuel because the country does not have rail lines and gasoline is used only in private household vehicles. Only three cities have metro lines.

For the rest, without diesel, large and small cities would stop receiving all kinds of products.

Since the end of February, trucks that transport food and other goods have been stranded or must wait in very long lines to be able to stock up on fuel. Day by day, the time it takes to get to the cities grows. Since the beginning of March, truckers in regions that produce food, like the states of Lara and Aragua, have protested the fuel shortage.

The Federation of Ranchers (Fedenagas) stated that “the lack of diesel makes it impossible to produce and distribute food products [like] beef, milk, and cheese.” The Venezuelan Association of the Chemical and Petrochemical Industry (Asoquim) warned that 80 percent of the industry faced serious problems sourcing diesel and that 76 percent had problems obtaining raw materials from suppliers to similar reasons.

Aquiles Hopkins, president of the National Federation of Agricultural Producers (Fedeagro), told the BBC in an article dated March 15: “The gasoil [diesel] shortage is very serious. If there is not a solution, even a temporary one, in the next 15 days, paralysis of the whole production chain will begin.” Some estimate that seven in 10 trucks are already immobilized.

If Venezuelans thought we were dependent on oil and gas, now we will realize that our addiction to diesel is much greater. These shortages could lead to a public health and food catastrophe, particularly as the new Brazilian strain of the coronavirus wrecks the worst pandemic havoc yet.

At the end of October, five days before the U.S. presidential elections, Elliott Abrams, Washington’s special representative for Venezuela, included diesel in the list of sanctioned items, despite the fact that it had been exempted from the U.S. government’s previous decrees. Caracas had depended on exchanges of crude oil for diesel in order to maintain a minimum level of production in spite of the heavy economic sanctions on the oil industry since 2019. Once those sanctions went into effect, the Treasury Department agreed on humanitarian grounds to allow PDVSA to engage in this swap. These transactions with international companies like Reliance of India, Repsol of Spain, and Eni of Italy enabled the country to maintain a diesel supply in these recent years.

“We are trying to stop the export of crude by the Maduro regime in Venezuela, and one of the ways to stop it is to prevent people from swapping various products for it,” Abrams said while introducing the new sanction last year.

On March 9, the opposition transportation chamber Catracentro recognized that up until the end of 2020, the diesel supply “had been fluid,” but has since dried up. Lawmaker Jesús Faría of the governing party said the same day that, since November, the country has not received any diesel.

According to unreliable sources of the radical opposition oil union Fedepetrol, at the end of 2020 PDVSA produced some 25,000 barrels a day. These same sources estimates that 100,000 barrels are needed to supply the national market. There is no official information on the matter.

PDVSA used to produce diesel for national consumption and for export. Importing diesel was not necessary. But the industry always depended on chemical and industrial inputs to refine crude oil. When the blockade heated up, it could no longer acquire these inputs. As with other problems related to oil refining, the crisis follows both internal issues within the industry as well as Washington’s sanctions. The financial blockade on PDVSA is a significant factor, but not the only one.

But since Abrams introduced the new sanction, different international oil companies that had agreements to swap for Venezuelan crude stopped supplying diesel.

Followers of the government and the opposition constantly blame one another for the grave economic crisis, and especially for the fuel crisis. Both have strong arguments to single out the other for what is happening. However, the diesel blockade makes the burden of the economic sanctions clear. It is now very difficult to downplay the responsibility of the U.S. government and, therefore, of the radical opposition led by Juan Guaidó calling for such sanctions.

Perhaps that’s why, in an article published by the Council on Foreign Relations weeks after President Joe Biden’s inauguration, Abrams himself called on the Biden administration to lift the diesel sanctions on Venezuela in exchange for the Maduro government allowing the World Food Program (WFP) to operate in the country.

Abrams confessed that this sanction has opened an internal debate over the humanitarian situation it could provoke. He mentions that “advocates of allowing the diesel swaps suggest real shortages are coming.” And he suggests that this could help Maduro “to shed crocodile tears about diesel while continuing to block WFP.”

“It’s logical,” he wrote. “If the diesel swaps are meant to help the food situation, then let’s demand that the regime allow serious and direct help to Venezuelans in need.”

Did the hawk become a dove? Did he have an epiphany? Was he worried about his country’s image if a humanitarian disaster unraveled? Why did he recant on his initiative?

In any case, with this sanction, Abrams left behind a minefield over the issue of Venezuela. Now the Biden government is solely responsible for deactivating it.

On March 23, Democratic senator Chris Murphy of the Senate Foreign Relations Committee also called in a letter to Secretary of State Antony Blinken for the sanctions on Venezuela related to diesel to be lifted.

The Trump administration was never so effective in causing so much damage to Venezuela as during the first months of the new Democratic government.

Once the diesel scarcity is thoroughly felt, the intensification of the food and public health situation—accompanied by hypothetical images of food rotting in place without any way to transport it, generalized hunger, long lines for fuel, tremendous shortages, and masses of people walking to walk or to get food—could prompt the most responsive and activist groups in the United States and beyond to worry about Biden’s policy on Venezuela.

And it could also generate greater rejection in the general population of the leadership of Venezuela’s radical opposition that calls for and applauds this kind of sanctions.

None of this approaches a political solution and much less the downfall of the Maduro government. Quite the contrary.

Juan Vicente León, a well-known opposition analyst put it this way in a tweet: “2+2=4. If diesel imports through swaps for oil are prohibited, it creates a collapse in supply, more government control in allocating quotas, monetizing oil and dollarization of internal diesel that it now charges. A gift with a bow for Maduro.”

We will soon see the havoc wrecked by this sanction—unless something changes, such as support from government allies or a change in policy of the new U.S. government.

For now, the diesel shortage appears to be a serious problem that has largely gone unnoticed by a population accustomed to crisis.