From both sides of the Rio Grande, a grassroots network helps people seeking abortions in post-Roe United States find the care they need. 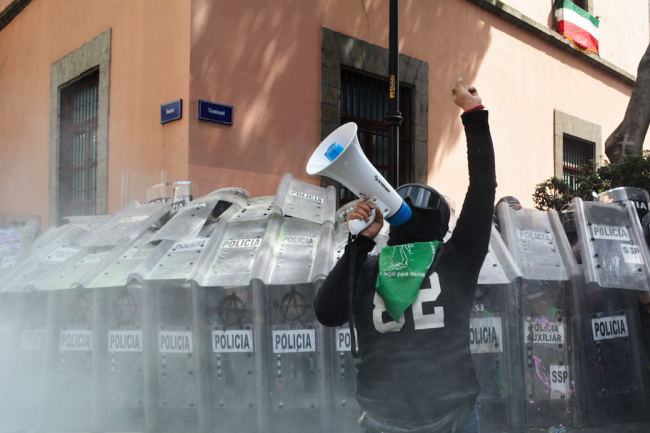 The national backslide in the sexual and reproductive rights of women and people with the capacity to gestate in the United States began to materialize on May 2, 2022. That day, Politico published the leaked draft majority opinion, written by Supreme Court Justice Samuel Alito, that would reverse the historic 1973 Roe v. Wade and nearly 50 years of legal precedent supporting the constitutional right to abortion. And that decision came to fruition on June 24. Six conservative justices prevailed over three liberals, and Roe v. Wade and the 1992 Planned Parenthood v. Casey were overturned.

The news, of course, didn’t come as a complete surprise, and pro-choice activists were already preparing for such a scenario. In recent years, states such as Mississippi, Oklahoma, and Alabama have approved very restrictive legislation regarding the right to choose, and a total of 26 states created trigger laws to further limit access if Roe were overturned. When Texas introduced a law in September 2021 outlawing abortion after six weeks of gestation, it came as a strong blow—and warning—for women and gestating people across the country.

Days before Roe v. Wade’s reversal became official, the Guttmacher Institute, a research and policy organization focused on sexual and reproductive health issues, published a report highlighting key data. According to the report, in 2020, the United States registered 930,160 abortions, an 8 percent increase compared to 2017, when 862,320 pregnancies were interrupted. Citing this upward trend in demand for abortion care, the report warned that overturning Roe “could be even more devastating than predicted by prior analyses.”

After June 24, activists and rights groups continued to highlight the impact the decision would have on all women and pregnant people, but especially those most vulnerable, such as migrants with irregular immigration status, trans and nonbinary people, and Black, Latinx, and Indigenous women. The names of organizations supporting abortion access began to circulate more rapidly.

Amid the uncertainty, organizations and the media started to pay attention to an alternative that could help confront the legal setback from the other side of the U.S. southern border: a cross-border network of collectives that accompany abortions in Mexico.

The Beginning of a Growing Network

“Mexico looked to the United States as an example,” says Verónica Cruz, an activist and cofounder of Las Libres, a Mexican organization that has accompanied abortions and campaigned for abortion decriminalization since 2000. “In the abortion movement in particular, you always study the Roe v. Wade case. So it was startling to see how on September 1 [2021] restrictions came in Texas and, in contrast, on September 7, our Supreme Court…unanimously declared that abortion is not a crime.”

I spoke with Cruz at the end of January 2022 in Matamoros, Tamaulipas, on the heels of a days-long meeting. At the gathering, collectives mainly from northwestern Mexico but also from Texas decided to create a cross-border network to guarantee abortion accompaniment in light of Texas’s new restrictions.

Cruz got the idea to create a cross-border network during an interview with journalist Jorge Ramos. Ramos asked her if the model Las Libres used for accompanying safe abortions in Guanajuato, one of Mexico’s most conservative and restrictive states in terms of abortion access, could work for Texas. “And yes, the answer is yes,” says Cruz. “And it occurred to me that, of course, one response could be a network.” 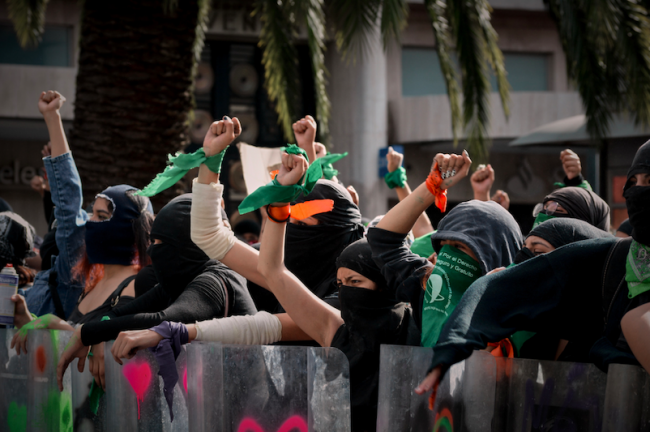 Mexico’s Supreme Court declared the criminalization of abortion unconstitutional on September 7, 2021. That doesn’t mean abortion is legal, safe, or free in the country—decriminalization is happening gradually, with abortion currently legal in nine out of 32 states. But the decision did create changes that allowed Las Libres and other collectives that accompany abortions in Mexico to link up and organize in new ways.

What would become the cross-border network began to come together in October 2021. As the first virtual meetings got underway, more Mexican collectives working near the Mexico-U.S. border stepped up. They agreed that a face-to-face gathering was necessary. “Because that was going to nurture the strategy—meeting, thinking, devising together,” explains Cruz.

The groups sought funds to hold the gathering and decided it would take place in Matamoros. In the month they spent collecting the money, media attention around the idea played in their favor. By December, The New York Times had gotten wind of the initiative: “A Plan Forms in Mexico: Help Americans Get Abortions,” the headline read.

“At that time, no one was thinking about how to present an alternative to the women [of Texas] so that they wouldn’t be thinking ‘the world is ending for me,’” says Cruz. “We have a lot of experience with at-home medication abortion, and in Texas many women were born with the right to the clinic [for abortions]. So they are coming very late to at-home medication abortion because they thought they wouldn’t need it.”

The network became a reality. The first gathering allowed activists to share experiences about what it means to accompany abortions in Mexico and discuss the challenges ahead for Texas.

“Despite all the adversities, we said: it’s worth doing,” says Cruz. “But also, while the meeting was taking place, women were already asking for abortions, accompaniment, and medicine.” She says network members saw it as “something that must be done,” an inevitability. “But above all,” she adds, “we have the experience [and] the certainty that we are assisting women exercising a right.”

In the Face of Urgency, An Alternative

Five months after the creation of the cross-border network, the situation in the United States changed. It wasn’t just Texas anymore. After the repeal of Roe v. Wade, the collectives that make up the network—which continue their own work in states such as Tamaulipas, Coahuila, Nuevo León, Baja California, and Guanajuato alongside their binational organizing—began to receive more requests for accompaniment from women in other parts of the United States. From Guanajuato, Las Libres has responded to many such cases.

Marcela Castro of Aborto Seguro Chihuahua and Marea Verde Chihuahua says that, since the end of June, she has also seen an increase in requests from U.S. women seeking support, both from the cross-border network and her chapter of Marea Verde.

Although the organization has managed to send misoprostol or mifepristone—pills used for medication abortions—to people who request it, they are aware that “if someone carries the medication or handles it or has it in their possession, they may be subject to investigation” if they get caught in a jurisdiction that outlaws abortion, Castro says.

The trend is similar in Tijuana, Baja California, another point at the U.S. border. Crystal P. Lira is a member of Las Bloodys, a collective that has been accompanying abortions for three years. She says the while the increase hasn’t been massive, it’s demonstrative: “From 2019 to 2021 we had six cases, but from the end of 2021 to date, we’ve already had 30 cases.”

According to Lira, the organization supports women from California and other states. “Even before [the repeal of] Roe v. Wade,” she says, “we knew that Latin American women faced challenges.” Of the women who have contacted them, 99 percent speak Spanish, she says.

Lira emphasizes something important for Las Bloodys: “We start from respect, from saying, ‘yes, we have experience, but we respect your own processes.’ Something that we want to safeguard and guarantee is that access to medication continues to be available and that women know that we exist outside the United States, that it is a viable option.”

“The second challenge is how to work on the ground with the women who need it most, who are migrants, Hispanics, who cannot travel but also don’t have resources and perhaps not even access to a phone or the internet,” Cruz adds.

Vanessa Jiménez, from the Red Necesito Abortar in Monterrey, also saw from the outset of the cross-border network how fear would pose a challenge. “The most difficult thing is to unravel the social part of the fear,” she says. “As a Mexican, I clarify: I also went through it. It is important to weave together, to think about how to protect women and activists.”

Aside from cultural and social stigma, abortion by medication also carries misconceptions. Cruz recounts that when she and other activists of Las Libres first started doing abortion accompaniment, many people, including feminists, told them that it was too risky and questioned if the work was putting women in danger. Her response: “Of course not.”

“The protocol we follow is from the WHO; we didn’t invent it,” she says. “What we invented was how to develop these organic networks of solidarity between women.”

Lizbeth Hernández is a Mexican freelance journalist, editor, and photographer who identifies as a lesbian. She is founder and current co-coordinator of Kaja Negra. Since 2011, she has mainly covered feminist and LGBTI+ movements and actions in Mexico City and other parts of the country.