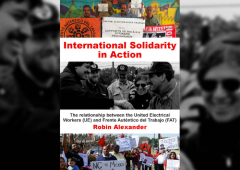 Decades of joint organizing between two independent labor unions—one in Mexico and one in the United States—show the power of fighting for workers’ rights across borders.

When a billionaire can hold a country hostage, debt “default” takes on new meaning.

Most English-language news media reported on the serious problems that plagued Haiti’s recent elections, including long lines, record low voter turnout, and violence. But they barely mentioned the election’s biggest flaw: the arbitrary banning of more than a dozen political parties from the ballot—most notably Fanmi Lavalas, the country’s most popular party, which has won every election in which it has been allowed to participate.

In August, Bolivian president Evo Morales won a referendum on his term in office with 67% of the vote. The opposition, having failed to unseat Morales in the face of the largest electoral majority in Bolivian history, embarked on a campaign of violent destabilization that culminated in riots, economic sabotage, and the massacre of more than 20 indigenous Morales supporters in September. Just a day before the massacre, at the height of opposition violence, the Bolivian government expelled U.S. Ambassador Philip Goldberg, following revelations that the U.S. Embassy in La Paz had asked Peace Corps volunteers and a Fulbright scholar to spy inside Bolivia, together with growing evidence, amid official secrecy, of U.S. funding for violent opposition groups.

The Fun House Mirror: Distortions and Omissions in the News on Bolivia
May 4, 2009
Dan Beeton

The mainstream press in the United States will often simply ignore Bolivia, while the little U.S. media coverage the Andean nation does receive is deeply flawed and distorted. The media depicts the government of Evo Morales as having dubious political legitimacy, dismissing his electoral victories as little more than the entrenchment of political polarization in the country. Media coverage of opposition-led violence is also systematically distorted or completely ignored.

If the U.S. media have failed to cover the story of political instability in Haiti with the depth it deserves, it is certainly not the first time. In fact, it is the latest episode in a pattern of U.S. reporting on Haiti that has given many of the most important stories only a cursory glance. To get an idea of how and why this happens, I interviewed several U.S. journalists who have reported from Haiti, some of whom spoke on condition of anonymity.