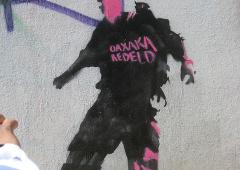 Teachers fight on virtually alone: a militant minority whose interests seem selfish to some and whose tactics seem violent to others. Yet a great many teachers feel they fight not only for themselves, but for their union, their communities, and for Mexican democracy.

The Mexican Electrical Workers Union (SME) celebrated its 95th anniversary on December 14 with cultural events and pledges to continue to fight for the jobs of its members. But now, two months since President Felipe Calderón's liquidation of the state-owned Central Light and Power Company (Luz y Fuerza del Centro), seizure of the facilities, and firing of the 44,000 workers, and faced with the government's intransigence, the union has been forced to change its strategy.

After almost twenty years of living with the Washington Consensus of free-trade policies, a broad opposition to the political economy of neoliberal globalization has developed throughout Latin America.