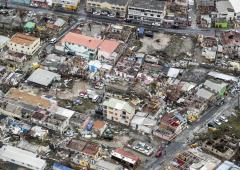 After the Hurricane(s)
September 15, 2017
Kevin Edmonds

From climate change to dependence on tourism, the Caribbean today faces a variety of existential threats.

More than a year has passed since Haiti’s 2010 earthquake, along with one of the largest international relief efforts in modern history. Yet, for many people in Haiti today, little has changed, and for many others life has become worse. While the uncontrollable forces of nature can be blamed for the death and destruction of the earthquake, the extreme vulnerability of the nation both before and after the disaster was entirely man-made, and a continuation of a lengthy history of self-interested foreign intervention in their country.

On November 28 Haitians went to the polls to vote for a new president. However, while the Organization of American States and the Caribbean Community (CARICOM) validated the elections, other observers have documented that the voting process was rift with irregularities. The following photos question the election's legitimacy, especially with so much at stake in a country in desperate need of reconstruction after the January 12 earthquake.

On September 20, Haitian prime minister Jean-Marc Bellerive, U.S. Secretary of State Hillary Clinton, and the World Bank announced their partnership with a South Korean garment firm to establish an industrial park that will create 10,000 garment assembly jobs in Haiti. Without a doubt, earthquake-ravaged Haiti needs jobs, mainly to provide the country’s 1.3 million homeless with the means necessary to rebuild their destroyed homes. However, rather than solve the housing problem, the factories will depend on the vast pool of low-wage labor present in the homeless camps. Haiti's meager minimum wage of $3.09 per day will be barely enough to cover the worker's food expenses.

While the presidential candidacy of rapper/entertainer Wyclef Jean in Haiti’s upcoming elections has garnered much international attention, underneath the glare of this hype are the continued assaults on the country’s democratic process. Much is at stake in this key election, scheduled for November 28. The winner will be responsible for the colossal task of rebuilding the nation’s shattered infrastructure and psyche after the January 12 earthquake. Jean’s glitz and glamour may have stolen international headlines (despite Haiti’s August 20 ruling denying him the candidacy), however, the real story is that the country’s strongest and most popular political force will again be excluded from these elections.

The CIA, the Cold War, and Cocaine: The Connections of Christopher “Dudus” Coke
July 14, 2010
Kevin Edmonds

On June 22, Jamaican police arrested Christopher “Dudus” Coke in the Tivoli Gardens neighborhood of Kingston and immediately delivered him into U.S. custody. Many Jamaicans are hoping that Coke will now reveal the long history of connections between the country’s political leaders, its business elite, and its gunmen in the street. Such revelations are likely to illuminate past actions of the CIA, which helped create one of Jamaica’s most powerful organized crime organizations, the Shower Posse. These links are ever more important as the United States is poised to invest millions of dollars to make the Caribbean its newest front in the drug war, ostensibly fighting some of the same personalities and groups they themselves helped create.

The trade policies enacted under the Clinton administration in the 1990s ruled out the possibility of a future for Haiti’s roughly 3 million small farmers. This is according to the former U.S. president himself. In March, Clinton, who is now the UN Special Envoy to Haiti, admitted that U.S. free market agricultural policy towards Haiti “has not worked." However, when discussing the possible future of Haiti’s agriculture at the International Donor’s Conference in New York on March 31, Clinton did not mention restoring the rice crop he helped destroy.

NGOs and the Business of Poverty in Haiti
April 5, 2010
Kevin Edmonds

No other country in the world has more non-governmental organizations (NGOs) per capita as Haiti. After the January 12 earthquake these NGOs received the bulk of the global relief funds, while the Haitian government, regularly accused of corruption by the U.S. State Department, has remained marginalized in the recovery and rebuilding efforts. This leaves a country where unelected organizations, unaccountable to the Haitian people, are calling the shots and accused of profiting from the poverty they are entrusted to fight.

In December 2003, the dedication ceremony of Haiti’s first and only public medical school took place in Port-au-Prince. The school’s ability to provide free medical education was considered one of the most important achievements of former president Jean-Bertrand Aristide’s administration. A mere one month after it opened, however, the school became one of the many casualties of the military coup that ousted Aristide in 2004. The story of this school is both the story of the Haitian people's iron will for self-determination and betterment, and the country's constant struggle with meddling foreign powers.

In December an agreement was reached that will see the EU further reduce tariffs on imported Latin American bananas. The eastern Caribbean island nation of St. Lucia is now facing a widespread economic and social breakdown—including a crisis in the government’s ability to provide basic social services—that threatens to reverse 40 years of genuine development achieved through protected trade.