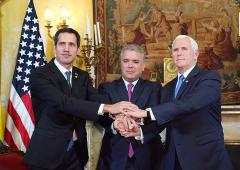 Despite previous sanctions leading to over 40,000 deaths in Venezuela over two years, the U.S. is escalating its economic offensive. 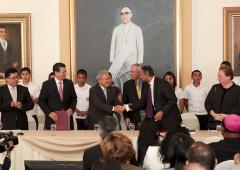 WAR BY OTHER MEANS IN EL SALVADOR
March 16, 2015
Kevin Young

The U.S. “Partnership for Growth” reflects a shift in imperial strategy and highlights the constraints facing progressive governments in Latin America 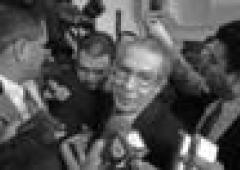 U.S. policy toward Latin America during the first six months of the Obama administration has generally tended, with some exceptions, toward continuity with that of the Clinton and Bush administrations. Despite encouraging rhetoric, the Obama White House has ratcheted up militarization and has continued to promote neoliberal economic policies. The administration's first big test has come with the ongoing coup crisis in Honduras, and the response has been far too equivocal.

The mainstream media is howling over Hugo Chávez's bid to change the constitution for a third term, while coverage of Colombia's Álvaro Uribe, a staunch U.S. ally, to do the same raises few, if any, questions in the media. U.S. news coverage of parallel political events in Colombia and Venezuela offers an opportunity to test the usefulness of Edward Herman and Noam Chomsky's "propaganda model," developed in their 1988 book Manufacturing Consent: The Political Economy of the Mass Media.