Despite the recent substantial coverage of Latin American “dirty wars” of the 1960s through 1980s, U.S. news outlets have usually ignored the role of the U.S. government in supporting these murderous right-wing regimes through military aid and diplomatic support. This pattern also applies to press coverage of current U.S.-backed “dirty wars,” in Honduras and elsewhere.
July 22, 2013
Tweet
Kevin Young

Recently the Latin American “dirty wars” of the 1960s through 1980s have resurfaced in mainstream media discussion. One reason is the trials in Argentina, Chile, Guatemala, Haiti, Peru, and Uruguay against some of the late twentieth century’s most vicious criminals, who are collectively responsible for the murders of hundreds of thousands of political dissidents and their suspected sympathizers. Some of the highest-profile defendants are Guatemalan dictator General Efraín Ríos Montt (1982-83), Haitian dictator Jean-Claude Duvalier (1971-86), and various officials from Argentina’s military dictatorship (1976-83). Dozens of former Argentine military officials have been convicted since 2008, while prosecutions against Ríos Montt and other Guatemalan officials and Haiti’s Duvalier have been attempted since 2011.

Despite dedicating substantial coverage to these events, U.S. news outlets have usually ignored the role of the U.S. government in supporting these murderous right-wing regimes through military aid and diplomatic support. This pattern also applies to press coverage of current U.S.-backed “dirty wars,” in Honduras and elsewhere. 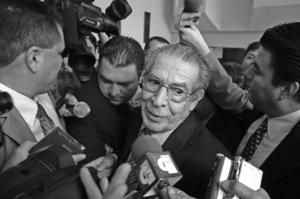 The documentary record leaves no doubt about U.S. support for state terror in Latin America’s dirty wars.1 Although historians debate whether U.S. support was decisive in particular cases, all serious scholars agree that Washington played at least an important enabling role. Argentina, Guatemala, and Haiti are good examples.

Argentina’s military regime murdered, tortured, and raped tens of thousands of people, mainly leftists, who criticized government policy. During the height of the repression, the U.S. government gave the junta over $35 million in military aid and sold it another $43 million in military supplies. It was well aware of the state terror it was supporting. Three months after the 1976 coup, U.S. Secretary of State Henry Kissinger privately told Argentine Foreign Minister César Guzzetti that, “we have followed events in Argentina closely” and “wish the new government well. We wish it will succeed . . . If there are things that have to be done, you should do them quickly.”2

In Guatemala, around 200,000 people were slaughtered by the U.S.-backed military regimes that followed the 1954 CIA-sponsored coup against elected President Jacobo Arbenz. The height of state violence was the genocidal “scorched earth” campaign of the early 1980s, carried out—largely with U.S. weapons—by General Ríos Montt and his predecessor Romeo Lucas García. The campaign specifically targeted indigenous Mayans, who were deemed likely to sympathize with the country’s leftist guerrillas. In December 1982, despite his administration’s private recognition of the military’s “large-scale killing of Indian men, women, and children,” Reagan visited Guatemala and publicly declared that Ríos Montt was getting “a bum rap” and was “totally dedicated to democracy.” The next day the Guatemalan army launched its worst single massacre of the decade, killing nearly 200 men, women, and children in the village of Las Dos Erres. U.S. military aid continued thereafter, though often secretly.3 Ríos Montt himself later noted the importance of U.S. military and diplomatic support, telling a journalist that, “he should be tried only if Americans,” including Ronald Reagan, “were tried too.” (On May 10 Ríos Montt was convicted of genocide and crimes against humanity, but the conviction was annulled by the country’s Constitutional Court after intense lobbying by business and military elites. In April, former army officer and current Guatemalan President Otto Pérez Molina had tried to shut the trial down for fear that witnesses would implicate him in civilian massacres; one had already done so.)4

Turning to the Caribbean, Haiti’s Jean-Claude Duvalier is no less notorious for his brutality. He and his father, François, murdered and tortured tens of thousands of Haitians. Yet for three decades the Duvalier dynasty enjoyed strong U.S. support, including military training and the sale of millions of dollars in weapons and military aircraft. The dictatorship was “a dependable, good friend of the U.S.” according to a U.S. Embassy official in 1973.5 U.S. support was only withdrawn when a popular uprising was on the verge of ousting Jean-Claude in 1986.

Argentina, Guatemala, and Haiti are just three examples of U.S. support for repression. Political scientist Lars Schoultz has quantified the relationship between U.S. aid and repression by Latin American governments for the years 1975-77, finding a clear pattern: “The correlations between the absolute level of U.S. assistance to Latin America and human rights violations by recipient governments” were “uniformly positive, indicating that aid has tended to flow disproportionately to Latin American governments which torture their citizens.”6 The logic is not a mystery: Washington has always preferred U.S.-friendly oligarchs and murderers when faced with the threats of substantive democracy, economic redistribution, and independent nationalism.

Yet the documentary record and scholarly consensus are not reflected in U.S. press coverage. As the table below shows, even the nation’s leading liberal media almost never acknowledge U.S. support for the dictatorships in Argentina, Guatemala, and Haiti. Only 13 times over the past five years did any allusion to that support appear in coverage by The New York Times, Washington Post, and National Public Radio (NPR), despite 222 total news and opinion pieces that mentioned former dictatorship officials in those countries. In other words, these media outlets only acknowledged U.S. support 6% of the time.

Recently the U.S. press has strongly condemned the Argentine, Guatemalan, and Haitian dictatorships, decrying, for instance, Duvalier’s “squalid legacy of disappearance, torture and murder” and interviewing Argentine torture victims and children stolen from their parents at birth by the military.8 The problem is that the perpetrators appear simply as brutal criminals in far-off lands, with no connection whatsoever to the United States.

Coverage that does mention the U.S. role often casts the United States as an advocate for democracy and human rights. One 2011 report on Duvalier says only that the United States helped arrange for his “departure from Haiti” in 1986. A 2012 report on charges against Efraín Ríos Montt says that “Washington has demanded that Guatemala prosecute human rights violations as a condition for receiving military aid,” while saying nothing of past U.S. support for the man on trial or the fact that the current Guatemalan president, a U.S. ally, has also been implicated in civilian massacres during the country’s civil war.9

Honduras is one example. Since the June 2009 military coup against President Manuel Zelaya, the governments of Roberto Micheletti and Porfirio Lobo have presided over a nightmarish cycle of violence against workers, peasants, LGBT people, journalists, and human rights defenders, involving hundreds of political murders and systematic impunity.10 Despite its half-hearted initial criticisms of the coup (which the U.S. ambassador at the time privately noted to be “a patently illegal act”), the Obama administration soon signaled its tacit support for the Micheletti regime and helped legitimize the November 2009 “election” of Lobo amidst massive government intimidation and repression.11 It has increased military aid to Honduras since the coup, giving it tens of millions of dollars a year in military aid and sales contracts.12 It also appears to have lied about its aid to the Honduran national police chief to circumvent restrictions on aid to gross human rights violators. 13

U.S. press outlets have usually ignored these facts. They have often implied that the coup was justified because of Zelaya’s alleged provocations. The victims of state violence have received only a small fraction of the attention given to the victims of the Iranian government and other regimes that Washington designates as adversaries.14

When U.S. media do report on the repression in Honduras, they downplay the Obama administration’s support for it. The United States is portrayed as an earnest advocate of democracy. Coverage often stresses the “wrangling between the United States and the coup leaders” and characterizes the Obama administration as “leading the support for the democratic option.”15 Only twice since the June 2009 coup have The New York Times, Washington Post, and NPR mentioned the U.S. role in training General Romeo Vásquez and other coup leaders at the infamous School of the Americas in Georgia. (In the five-year period sampled above, the reporters, editors, and columnists at these three outlets have never mentioned the U.S. training of Efraín Ríos Montt and other criminals facing trial in Argentina and Guatemala.)

Coverage of Honduras illustrates how what Edward Herman and Noam Chomsky call the propaganda model: the crimes of U.S. allies are ignored, and violence and suffering merit attention only when U.S. enemies can be blamed (or when the crimes are safely in the past and the record of U.S. support for them can be forgotten). Recent coverage of Colombia, Mexico, and many other countries conforms to this pattern.16 Even when the press does acknowledge repression by U.S. allies, it usually omits the U.S. government’s role or presents it as a force for democracy and human rights.

The U.S. role in the world should be the foremost focus of U.S. citizens in discussions of global affairs, but it is seldom described honestly in the press. Most of the public favors a foreign policy based on international law and universal human rights but has little knowledge of what the government and U.S. corporations do overseas. If the public knew, it would be more difficult for U.S. elites and their allies to continue violating human rights abroad. Mainstream press coverage systematically fails to provide the most basic information about history and current political realities, highlighting the importance of alternative media not reliant on corporations or the state.

7. Based on LexisNexis database searches for and articles (print or online) and searches on www.npr.org for radio broadcasts mentioning former Argentine officials Jorge Videla, Emilio Massera, Reynaldo Bignone, Alfredo Astiz, Julio Poch, and/or Luciano Menéndez; Guatemalans Efraín Ríos Montt, Mauricio Rodríguez, Oscar Mejía, Héctor López, Jorge Sosa, Pedro Pimentel, and/or Gilberto Jordan; and Haitian Jean-Claude Duvalier. I read each piece that contained one or more of these names to see if it mentioned U.S. support; the tally of thirteen is generous, including even implicit allusions to U.S. support.

16. Herman and Chomsky, Manufacturing Consent: The Political Economy of the Mass Media, second ed. (Pantheon, 2002); Kevin Young, “Colombia and Venezuela: Testing the Propaganda Model,” NACLA Report on the Americas 41, no. 6 (2008): 50-52; Andrew Kennis, “The Media Dependence Model: An Analysis of the Performance and Structure of U.S. and Global News”, (Ph.D. diss., University of Illinois, 2010).

Kevin Young is a PhD candidate in history at SUNY Stony Brook. His writing is available at kyoung1984.wordpress.com.