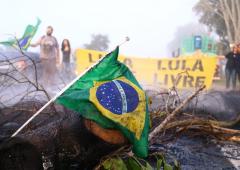 Central America: Between Past and Present
March 23, 2012
Michael Fox

On November 17, the two-month anniversary of Occupy Wall Street, occupiers and supporters took to the streets of New York City for a day of action. 30,000 marched from Foley Square over the Brooklyn Bridge. Among those in the crowd were unions, teachers, students, immigrants, youth, and older activists—united in support for Occupy Wall Street.

On Tuesday, the UN General Assembly again voted overwhelming to condemn the U.S. embargo of Cuba. As international relations scholar Arturo López-Levy points out in the latest NACLA Report, the embargo itself violates basic principles of the human rights model established by the UN Universal Declaration of Human Rights.