The Train of the Flies

Every year some 400,000 undocumented Central Americans cross Mexico trying to make their way to a better life in the United States. Most of them successfully make the trip, but many die, disappear, or are kidnapped en route. As they pass through Mexico they frequently encounter great brutality, but they also meet with great humanity.
Tweet
Fred Rosen
Mexico, Bewildered and Contested
10/4/2011 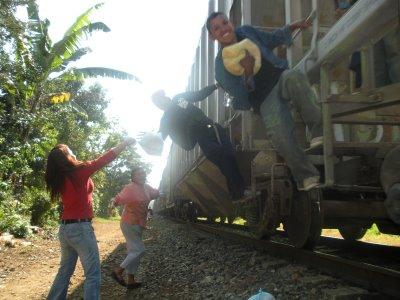 Delivering the food: ayudalapatrona.blogspot.com their way to a better life in the United States. Many travel as stowaways on freight trains. Border to border, it’s a trip of about 5,000 miles.

Most of them successfully make the trip, but many die, disappear or are kidnapped en route.  As the migrants pass through Mexico they frequently encounter great brutality, but they also meet with great humanity.

One of the commonly boarded trains passes daily through a small village in the state of Veracruz called La Patrona. Here, a group of 14 women, for the past 15 years, have given food and water to the migrants who travel “like flies” on the daily train bound for the U.S. border. The women cook and deliver about 200 meals—mostly rice and beans—every day. The women are called “las patronas” after the name of the village, and after their role as patron saints in the lives of the passing migrants.

Filmmakers Nieves Prieto Tassier and Fernando López Castillo have made a short film about Las Patronas for the Spanish newspaper, El País. You can see it here (it is in Spanish but worth seeing if just for the self-explanatory images). It is a moving documentary. “We saw them every day,” one of the women tells the camera, “but until they told us (from the moving train) we didn’t realize they had traveled from other countries. ‘Madre,’ they would shout, ‘we are hungry.’ That’s when we started giving them some food.”

"Violence Increases Against Migrants and Their Advocates in Mexico," by Shannon Young, August 10, 2011

"Of Migrants and Minutemen: Inside the Immigration Battle," NACLA Report May/June 2007