In October, Bolivian President Evo Morales signed a new law banning construction of the controversial TIPNIS highway. The law is now provoking a new round of conflicts between lowland indigenous groups and the Bolivian government, over what it means for the reserve to be declared an "untouchable" ecological zone.
Tweet
Emily Achtenberg
Rebel Currents
11/11/2011

Despite the passage of last month’s law banning construction of the proposed highway through Bolivia’s TIPNIS national park and indigenous territory, the TIPNIS conflict shows no signs of abating any time soon.

Currently, lowland indigenous groups and President Evo Morales’s Movement Toward Socialism (MAS) government are engaged in a bitter dispute over how to interpret the section of the law that declares the TIPNIS to be an “untouchable” ecological zone. The government is in the process of defining the term through regulations that will clarify and implement the law. 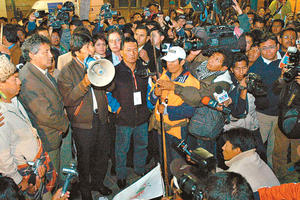 TIPNIS indigenous groups, who originally proposed the concept, say that it’s meant to prohibit exploitation or destruction of the reserve’s natural resources by outside interests (public or private), especially through mega-projects like dams, roads, logging, and hydrocarbons extraction. At the same time, they argue, it does not preclude or limit productive sustainable development initiatives sponsored by the native groups themselves, including existing projects such as forestry management, ecotourism, organic cocoa bean cultivation, and the harvesting of caiman and crocodile leather. These activities are protected under the Constitution, which grants exclusive rights to indigenous groups for the use and sustainable management of natural resources in their territories.

But key MAS legislators and government officials, including Vice President Álvaro García Linera, maintain that the concept of “untouchability” applies universally to all activities and groups that use the TIPNIS land and resources for commercial purposes. In recent weeks, Juan Ramon Quintana, Morales’s former Chief of Staff who now heads a key government development agency, has charged that companies operating in the TIPNIS in collusion with indigenous governing bodies, and some “unscrupulous” indigenous leaders, are “indiscriminately exploiting” the reserve’s natural resources for private gain and should be expelled.

For example, according to Quintana, timber companies using industrial machinery and sawmills are logging a 170,000 acre tract in the heart of the reserve, building roads to transport large volumes of timber. The sale of caiman and crocodile hides has become a “million dollar” export business monopolized by four companies, he alleges. Quintana charges that an Argentinean company has an exclusive 20-year contract to fly foreigners into their “five-star” luxury TIPNIS hotel, charging $7,600 for a tourism and sport fishing package, and paying the local communities just $200 per tourist.

TIPNIS indigenous leaders say that these third-party contracts have been licensed and approved by the Bolivian government, and are critical to their communities' survival. The ecotourism company, they explain, practices socially responsible and sustainable development, maintaining two small rustic lodges (built with local materials), requiring all fish to be returned to the rivers, and cooperating with scientific studies. The operation has high overhead costs, with 30% of its income paid to international marketing agents. Still, the financial benefits to the four communities participating in the project are not insubstantial, totaling around $100,000 this season. 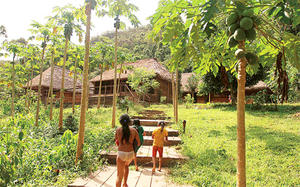 TIPNIS ecolodge. Credit:: El DeberWhile it’s hardly surprising that desperately poor communities would negotiate a disadvantageous business deal with a foreign company, or that individual leaders might become corrupted, indigenous groups suspect that the government’s motives in pressing the issue go beyond protecting the community’s welfare. TIPNIS activists like Fernando Vargas see the new government offensive as an “act of vengeance” to punish them for achieving the suspension of the highway. Some MAS militants, including cocalera leader Leonilda Zurita and Senator Isaac Avalos, have even maintained that the reserve’s “untouchable” status should prevent TIPNIS natives from fishing, hunting, and cultivating crops for their own subsistence.

[Update: on November 11, the government suspended the ecotourism and timber companies' environmental licenses and announced that existing crocodile harvesting permits will not be renewed in 2012.]

Meanwhile, both Garcia Linera and the government’s road agency head have recently suggested that alternative routes to the TIPNIS highway bordering the park would triple the cost and are infeasible from an engineering perspective. Such statements have further fueled the ire of cocaleros, colonists, and indigenous groups in the southern portion of the park who feel betrayed by Morales’s abandonment of the road. In recent weeks they have organized vigils and road blockades, demanding the immediate expulsion of all NGOs and businesses operating “illegally” in the park and a reinstatement of the TIPNIS route.

In turn, indigenous groups have demanded the eviction from the park of an estimated 200 illegal settlers in the next 30 days. Still, they oppose a recent government proposal to enhance security by militarizing the park, arguing that the presence of armed forces will frighten and intimidate members of the community.

On yet another front, Brazil, which is financing the construction of the larger Cochabamba-Beni road that was to have included the TIPNIS as its middle segment, has signaled that it will be patient while Bolivia solves its domestic problems. While Brazil wants to protect its interest in the highway project, which will help to provide access for its exports to Pacific ports, it also wants to prevent civil unrest that could jeopardize its substantial interests in Bolivia’s hydrocarbons, agribusiness, and infrastructure sectors.

The Brazilian government says it would favorably consider increasing its loan to pay for the higher construction costs of an alternative route, provided that other outstanding issues between the two countries are addressed. High on the agenda is the problem of irregular land titles for Brazilian soy producers in Santa Cruz, and the recent surge in stolen cars trafficked from Brazil across the Bolivian border—both difficult issues to resolve. How Brazil might react to a decision to abandon the middle section of the road entirely, with the other two segments already under construction, remains to be seen.

Far from resolving the TIPNIS conflict, it seems that the new law protecting the TIPNIS reserve has only set the stage for more conflicts to come.