Death by Deportation, With Help From the Human Rights Establishment 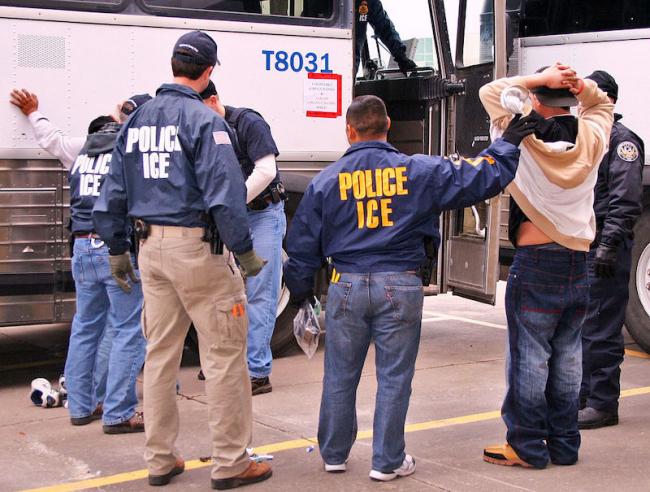 Weeks after the first reported case of coronavirus in the United States, on March 16, U.S. Senator Edward J. Markey (D-Massachusetts) called upon the Department of Homeland Security to halt “needless deportations” and to release from detention all non-citizens “who pose no public safety threat” to prevent the spread of coronavirus. On March 22, John Sandweg, former acting director of Immigration and Customs Enforcement under Obama, echoed Markey’s plea, but only regarding immigrant detention. Despite the limitations of its qualifying language, Markey’s call to lessen deportation and detention is welcome. However, the reasons for such advocacy have to go way beyond the dangers embodied by COVID-19, a threat that is ultimately temporary.

This is because the myriad harms—not least premature death—caused by national apparatuses of non-citizen control and their “violent borders” are not time-delimited, nor are they the exception. They are the inevitable outcome of how the system works. Addressing this violence thus requires systemic change—in other words, an abolitionist politics aimed at eradicating deportation and its carceral waiting room, immigrant detention.

But given how deeply the logic of national boundary control and the larger regime of exclusion is embedded in the collective psyche, it is difficult to see the system for what it is. As such, many critics champion measures that address symptoms, not the disease. In the process, they help strengthen the apparatus of violence rather than dismantle it.

Among the apparatus-legitimating critics are major human rights groups.

Take, for example a recent report by Human Rights Watch. Released on February 5, “Deported to Danger: United States Deportation Policies Expose Salvadorans to Death and Abuse” explores the killings of 138 individuals in El Salvador after their deportation from the United States. (The organization considers the figure of 138 a “significant undercount” due to a lack of reporting by media outlets and insufficient government investigation and recording of such cases in El Salvador.)  Focusing on deportations between 2013 and 2019, the valuable report also reveals that more than 70 other deportees experienced sexual violence, torture, and other harms—most often at the hands of gang members—or disappeared after their banishment to El Salvador. These cases, the authors contend, demonstrate “the importance of US authorities giving [Salvadoran nationals] a meaningful opportunity to explain why they need protection before they are deported.”

For Human Rights Watch, primary responsibility for such persecution lies with individuals and entities in El Salvador. But the organization also blames U.S. authorities for putting “Salvadorans in harm’s way in circumstances where [they know] or should know that harm is likely.” It thus makes a compelling case that the U.S. government is in violation of international law, which prohibits returning or deporting people to countries where they risk persecution, torture, or related forms of violence. On this basis, the report makes numerous recommendations aimed at enhancing the U.S. asylum process by, as stated in a press release, “providing broad protection to anyone…who would face a real risk of serious harm upon return” to the Central American country.

There’s no doubt that, were U.S. authorities to implement the recommendations, many lives would be saved. However, the asylum system—one of many components of the border policing apparatus—would still fall far short in providing adequate refuge for those in need. This is true for a number of reasons.

First, an assessment of what constitutes “a real risk of serious harm” is inherently subjective. It is based on the notion that the person requesting asylum can persuasively demonstrate a “credible fear” of persecution, which presupposes that those judging the credibility can know with a high level of confidence what will happen to a deportee. Given such high bars, some individuals are surely going to fall through the proverbial cracks.

Second, the whole process assumes the best of intentions on the part of U.S. authorities charged with determining the veracity of the would-be asylee’s story. This is a highly dubious supposition in the case of individuals whose job is predicated on the policing of territorial boundaries, and thus on saying “no” to at least some of those who seek to enter or remain.

Third, it ignores that the inherently selective asylum process unfolds in the real world, one in which political considerations come into play. As such, asylum seekers are often deemed as more or less deserving based on their countries of origin—and the administration in power in Washington.

Fourth—and most importantly—the asylum regime excludes, by design, most of the world’s people who need to be able to migrate to access the resources required for a dignified life. A “risk of serious harm,” given its basis in international refugee law, is only concerned with brutality of the direct, physical variety. The “violence of everyday life” that many experience in countries like El Salvador—grinding poverty, for example, or diminishing supplies of drinking water caused by prolonged drought, poor infrastructure, growing contamination, and gross inequality coupled with rapacious forms of “development”—and that also leads to premature death are not the harms that international refugee law is concerned with. Nor apparently is Human Rights Watch. In other words, the asylum system, even were it to work at it should ideally, legitimates deportation as long as the would-be source of harm to the deportee is not an identifiable human being—such as, say, a gang member, an intimate partner, or a corrupt police official. The very real threat of violence by poverty, and resulting diminished life chances, is not grounds for stopping deportation.

Human Rights Watch never asserts this in its 117-page report. It’s what the prestigious human rights organization doesn’t say that matters first and foremost. What it doesn’t say is anything that challenges the regime of exclusion, and its underlying logic.

Indeed, by merely calling upon the U.S. government to enact its apparatus of non-citizen control in a better fashion, Human Rights Watch ends up affirming the boundaries that help produce the human suffering it decries while confining those in need—but for whom asylum is not even a theoretical possibility—to an ugly status quo. By upholding both national and international law, and the related U.S. government obligations, the report reproduces a legal regime that at best provides protection for a small slice of those whose well-being is threatened. As the authors note, “There is no right to be granted asylum under international law, but there is a right to seek asylum.”

Demanding that the United States respect this right—and, effectively, calling upon Washington to put an end to deportations of Salvadorans at likely risk of physical violence—is a good thing. But it is far from adequate given the level of certainty of risk that it requires, the narrow ways it conceives of violence, and the fact that it puts asylum seekers at the mercy of countries with a self-interest in denying refuge.

By framing the problem as it does, Human Rights Watch replicates the division of global space that, in a world of great socioeconomic injustice, allocates life and death circumstances in a grossly unequal manner, key to which is the accident of country of birth. The organization thus enshrines unfairness. It also effectively exculpates the United States for its outsized role, via its imperialist depredations, in making life unviable for so many in countries like El Salvador. Moreover, it ignores how the huge CO2 emissions of the United States contribute to climate change, a major factor helping to drive outmigration from Central America.

Human Rights Watch is not alone in framing the issue so narrowly. Such conservatism is the norm among leading human rights organizations. It speaks to political scientist Samuel Moyn’s point that “human rights have become prisoners of the contemporary age of inequality.”

Breaking out of this prison of inequality necessitates many things. Key is a willingness to question what writer Todd Miller has called the “empire of borders.” So, too, is a demand for freedom of mobility and residence across international boundaries.

Of course, these would be small steps in a much larger struggle. However, by calling deportation and the principle of nation-state exclusion into question, organizations such as Human Rights Watch would help to delegitimize the practices and structures that contribute to violence of the sort exposed by its report. The organization would also enhance, rather than undermine, the struggle to transform the boundaries that underlie the unjust ties and divides between rich and poor, and places of privilege and disadvantage.

The need for such transformation is only made more apparent in a time of a global pandemic. Should not its achievement be a primary goal of any organization that purports to be dedicated to human rights for all?