In the Honduran Muskitia, Indigenous people have long been targets of violence and injustice by the government’s fight against drug trafficking. 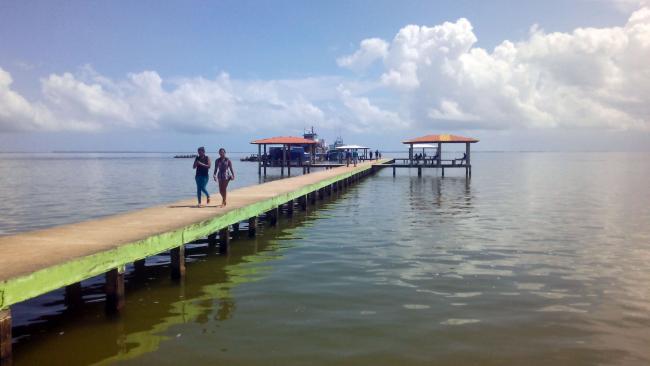 It was a clear and sunny afternoon on September 16, 2021, when a military helicopter appeared and began firing—seemingly indiscriminately—from above. The unsuspecting residents of Ibans, a small Afro-Indigenous community on the northeastern coast of Honduras, ran for cover from the stream of bullets raining down. While there have been conflicting reports on injuries and casualties, at least one man is confirmed dead and some estimates claim that this attack may have resulted in four deaths and 13 injuries. One of the injured has a bullet permanently lodged in his chest. The Honduran military was allegedly pursuing narcotraffickers when it opened fire in Ibans, but locals claim the "suspicious" boat was a run-of-the mill transport for gasoline. The victims’ families say that the military has not apologized and continues to blame the region’s “ungovernability” for provoking their lethal action.

This military attack on Indigenous and Afrodescendant civilians is sadly not the first in the Muskitia region of Honduras. In 2012, counter-narcotics agents, who were part of a joint U.S. Drug Enforcement Agency and Honduran military operation in the nearby Indigenous Miskitu community of Ahuas, opened fire on a passenger boat filled with unsuspecting people, killing four civilians—including a child and a pregnant woman—and injuring several more.

Although cocaine was passing through the region that night, the passenger boat coming from the neighboring Barra Patuca community had no way of knowing that they were about to enter such a volatile situation. As the boat arrived, DEA and Honduran troops assumed it was there to help with the cocaine shipment and opened fire on unarmed civilians. From a confiscated narco-boat and U.S. State Department helicopter, the joint U.S.-Honduran anti-drug trafficking force unleashed horror upon the passengers as well as bystanders on the shore.

The authorities, including DEA, initially tried to cover up the Ahuas incident and subsequently to justify it as a matter of security: they alleged that the commercial passenger boat was involved in trafficking drugs and that it opened fire on the military helicopter, despite the fact that no drugs or weapons were ever found associated with the boat. The DEA denied direct involvement for years until the U.S. Departments of State and of Justice published a scathing report. This report on Ahuas also detailed the DEA’s involvement in at least two other extrajudicial killings in the Muskitia in 2012. In addition, video evidence was released in 2017, after years of FOIA requests, which confirms the accounts of Ahuas locals who insisted those attacked were innocent civilians and that U.S. agents played a direct role in the operation. Survivors still suffer the physical and emotional scars of this attack, and await any form of apology, accountability, or reparation.

While these two incidents have eerie similarities, they happened nearly 10 years apart. Both operations and their aftermath—denial and silence in the face of despair—have become painfully predictable during this period. In a video published on September 30 by the Committee of Relatives of the Disappeared in Honduras (COFADEH), the vice president of the Miskitu Indigenous federation MASTA, Mirna Wood, condemned the attack and highlighted that it was not an isolated incident. In addition to drawing parallels to Ahuas, Wood noted another attack the previous year in the community of Barra Patuca, where military officials also killed a civilian who they allegedly mistook for a narcotrafficker. Additionally, in 2018, the military executed three civilians in the Miskitu community of Warunta.

Illicit drugs do transit parts of this region in Honduras, and much of the rest of it. In fact, since the Ahuas massacre, cocaine transit through the region has remained, on average, unchanged despite ongoing U.S.-funded enforcement to the tune of $158.6 million in narcotics control and military support between 2016 and 2019. In this context, these extrajudicial killings have come to represent an ongoing counter-narcotics operation that serves not to stop illegal drug trafficking, but rather to perpetuate violence and impunity through the militarization of Indigenous territories in Honduras.

Our research in the Indigenous and Afrodescendant territories of eastern Honduras shows that much of the violence associated with the region comes from police and military action during counter-narcotics operations and inaction in defense of land and human rights violations. The cost of this overzealous response and intentional neglect can be seen in the lives of Miskitu, Tawhaka, Garifuna, and other Indigenous peoples. The fact that cocaine transits through this region on its journey from Colombia to (primarily) the United States is used as justification for these deadly military tactics. The neglect of the Muskitia on all issues except drug trafficking, combined with the militarized approach to this single concern, means that anyone or any vehicle merely suspected of being involved with trafficking could become the target of active fire without any verification.

This positioning designates all natives in the region as potential drug-trade insiders. It furthermore assigns responsibility for the criminalizing trend in enforcement to the minority population that has historically been neglected by the state in the realms of education, health, and other social services. It also means that the police and military are unlikely to respond when locals report other types of problems, such as land grabbing and illegal road-building in protected national parks and Indigenous territories. Instead, their legitimate concerns are ignored because they are not deemed worthy of protection.

The Honduran Constitution is clear on the expectations for a trial: presumption of innocence, the entry of evidence into consideration, and the right to a defense, which should all precede incarceration for any crime, including that of drug-trafficking at any level. Just last year, the younger brother of outgoing President Juan Orlando Hernández was offered all of these trappings when he was tried in U.S. federal court for drug trafficking, money laundering, and conspiracy. He will serve a life sentence in a U.S. federal prison, most likely uncomfortable, but alive.

In contrast, the citizens of Ahuas, Barra Patuca, Warunta, and Ibans were not afforded any of these legal rights. No one bothered to determine their proposed guilt or innocence. Rather, counter-narcotics forces attacked these citizens with maximum force, presuming them to be guilty of narcotrafficking for merely inhabiting their native communities. Honduran and U.S. policymakers decry rampant corruption and the decline in the rule of law in Honduras. They claim that the pernicious flow of drugs requires a recommitment to “security” and thus a reinvestment in and retrenchment of military-led, no holds barred and no questions asked interdiction. Our data instead suggest that it is this militarized interdiction approach that is eroding the rule of law and increasing citizens’ distrust in their government.

Hondurans went to the polls on November 28 to elect a new president, as well as members of Congress and mayors throughout the country. Despite the ongoing pandemic, voters turned out in historic numbers. In a surprising turn, Xiomara Castro from the left-leaning Liberty and Refoundation (Libre) Party, emerged as the clear frontrunner with a 20-point lead over the incumbent party. Castro is breaking ground as the first woman president of Honduras, but her election also marks the end of 12 years of rule by the right-wing National Party, which has held onto power since a 2009 coup ousted Manuel Zelaya, Castro’s husband. While there is reason for renewed optimism, Castro's administration must prioritize reversing the trend of militarization. Strong action by this administration would also serve as a wake-up call to counter-narcotics donors in Washington, demonstrating that Hondurans are more than ready for a new strategy, with justice for all.

Laura Blume is an Assistant Professor of Political Science at the University of Nevada-Reno. Her research explores how political context impacts drug-trafficking violence, particularly along the Caribbean coast of Central America.

Laura Aileen Sauls is a Leverhulme Early Career Fellow in the Department of Geography at the University of Sheffield. Her research examines the intersection of Indigenous rights, territorial governance, and environmental change in Central America’s forests.