The Dirty War for Oil in Colombia

For decades, oil-rich Arauca has been the site of intense conflict involving illegal armed groups, the Colombian military, and multinational corporations. 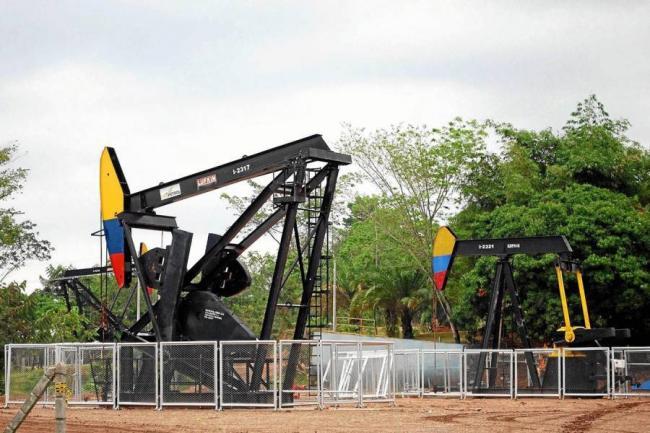 Read this article in Spanish.

On January 19, a car bomb exploded in the small city of Saravena, in the department of Arauca in eastern Colombia, only a few miles from the border with Venezuela. The blast killed one person and wounded at least 15 others, and seemed to have been targeting the headquarters of several local human rights organizations. The attack was not an isolated case. According to the United Nations, at least 130 people have been killed and another 3,000 have been displaced in the first few months of 2022. Arauca is yet again at the center of a deadly conflict involving left-wing guerrillas, paramilitaries, multinational corporations, and the U.S. government.

In 2020, President Trump sent 50 U.S. special forces personnel to train and advise Colombian forces in strategic regions, including the department of Arauca. The following year, the United States provided Colombia with five UH-1 Bell Huey helicopters and 20 M1117 armored security vehicles in an effort to increase military capabilities. In December, Colombia’s Defense Minister, Diego Molano announced that the new fleet of military vehicles would be deployed to the country’s north-eastern department of Arauca near the border with Venezuela, along with two new military bases.

Why has Arauca been singled out for this “enhanced” security policy? One answer is oil.

Oil was first discovered in Colombia in 1866 near the port city of Barranquilla. Ten years later, more was found around the Gulf of Urabá, near the Panamanian border, but serious exploitation did not take place until 1922, after the ratification of the Urrutia-Thomson Treaty between Colombia and the United States. This agreement brought to a close the diplomatic imbroglio caused by U.S. support for the Panamanian separatists who revolted against Colombia in 1903 and paved the way for massive U.S. investment in Colombian banana plantations and oil fields. Soon Tropical Oil, a subsidiary of Standard Oil, began production in the central Magdalena Valley and built a refinery complex in the city of Barrancabermeja.

In 1983, tests on wells dug by Ecopetrol and Occidental Petroleum, known as OXY, at Caño Limón in Cravo Norte, Arauca, indicated that oil reserves in that location amounted to 500 million barrels. By 1994, the flow was more than a million barrels a day, and the boom in Colombia’s oil frontier was underway.

Sustained guerrilla warfare in Arauca dates back to the beginning of La Violencia, when Liberal rebels, incensed by the 1948 assassination of populist leader Jorge Eliécer Gaitán, began a virtually unwinnable struggle against the Conservatives who had long held power. On June 13, 1953, army commander Lt. General Gustavo Rojas Pinilla seized power and immediately called for an end of civil strife. He offered amnesty to nearly all the guerrillas but banned the Communist party. Many were left dissatisfied by the reparations offered and their inability to participate politically. In the late 1950 the FARC (Revolutionary Armed Forces of Colombia) and the ELN (National Liberation Army) reorganized their operations. Soon they came to dominate much of the border region where the central government had never established a strong presence.

The exploitation of petroleum in Arauca beginning in the late 1980s exacerbated the armed conflict. Both leftist guerrilla and rightwing paramilitary groups fortified themselves economically and militarily. The FARC and ELN were quick to capitalize on the opportunities to open a new front in their war against the central government and extract economic resources offered by the presence of multinational corporations (MNCs) exploring for oil. In Arauca, oil pumped through the Caño Limón-Coveñas pipeline became a major target for both guerrilla forces. According to a top OXY executive, rebels blew up the pipeline 460 times between 1985 and 1997.

However, it is not only the illegal armed actors that are responsible for the bloodshed in Arauca. The Colombian Armed Forces and, indirectly, U.S. aid and OXY have worsened the suffering for innocent Colombians. In 1998, the Colombian Armed Forces, supported by U.S. antidrug aid and a private U.S. surveillance company with logistical support and equipment from Occidental, used U.S. cluster munition to bomb the small village of Santo Domingo, killing 18 innocent civilians, including 7 children and wounding more than 25 others.

On August 20, 2004, Isabel Hilton, a reporter for The Guardian, observed that “a complex mosaic of armed groups—rightwing paramilitaries and the army, often working closely together, and leftwing guerrillas—were struggling for control of the lucrative pipeline and cocaine routes.”  In response, President Álvaro Uribe declared a special security zone around the three northern municipalities of the department where the oil pipeline is located, and OXY and the U.S. government began funding the Colombian army’s 18th Brigade, the main government force in the zone. Despite this effort, security in the region did not increase, and civilians who assumed any position of leadership, such as school teachers, health workers, and union activists, were being killed in “appalling numbers.”

Alongside these threats to U.S. political influence in Colombia were specific economic interests. In 1959 for example, Colombia was one of the largest markets in South America for U.S. direct foreign investment.

Under the Clinton administration, the United States began sending billions of dollars in military aid to Colombia. As part of this multi-year counter-narcotics package called Plan Colombia, the United States sent $98 million to train approximately 4,000 Colombian military personnel to protect the OXY-owned Caño Limón pipeline, despite the military’s well-documented ties to right-wing paramilitary death squads. According to a report by Human Rights Watch these paramilitary groups were ”...fully integrated into the army's battle strategy, coordinated with its soldiers in the field, and linked to government units via intelligence, supplies, radios, weapons, cash, and common purpose that they effectively constitute a sixth division of the army.”

In 2020, the Carlyle Group, one of the most important investment groups in the world with over $221 billion in assets, purchased all of OXY's onshore continental assets for $825 million dollars. Despite OXY’s claims of environmental sustainability and social responsibility, the communities in Arauca are soundly opposed to their extractivist activities that threaten to destroy the local ecosystem and engulf the region in an armed struggle over control of the region’s vast oil reserves.

The Colombian government has issued sweeping oil concessions in the department of Arauca, some estimate as much as 80 percent of Arauca’s territory. By taking advantage of institutional weakness and bribing local officials, transnational corporations like OXY have been able to ignore environmental regulations, dumping tens of thousands of barrels of contaminated water into the flood zones of Caño Limón and the Arauca River, destroying the vegetation and biological resources in the headwaters of the Cinaruco and Capanaparo rivers.

“[OXY] has a whole history of serious impacts on the lives of the Colombian people, and especially the people of Arauca” said Jose Vicente Murrillo, a national spokesperson for the Cumbre Agraria, Campesina, Étnica y Popular (Agrarian, Peasant, Ethnic, and Popular Summit), and a member of  Congreso de los Pueblos (Peoples Congress), one of the groups targeted by the car-bomb attack on January 19. He called OXY’s exploration and exploitation of the Caño Limón oil field in Laguna de Lipa an “ecocide,” adding, ”By drying up the lagoon and dispossesing Indigenous communities from their spiritual territory, they were eliminated spiritually [...] thats why we consider that there was a genocide on top of the ecocide of the species of flora and fauna that were there.”

A U.S.-backed policy of militarization is clearly underway in Arauca. In October 2021, the U.S. Southern Command donated 20 M1117 armored security vehicles in a handover ceremony at the Buenavista Military Fort. The 20 M1117 ASVs showcased during the ceremony are part of the first of 145 vehicles scheduled to be delivered to Colombia, nearly doubling Colombia’s current fleet of armored vehicles. A month later, on January 3, Colombian President Ivan Duque sent over 680 troops to the department of Arauca, joining the nearly 7,000 already deployed to the border region. On March 10, President Joe Biden designated Colombia as a major non-NATO ally, paving the way for even greater military cooperation.

Multinational corporations like OXY have even financed special investigation units within the Attorney General’s office to investigate acts of sabotage against the pipeline, however, these special units have later been weaponized to criminalize and stigmatize civil society organizations opposed to their interests.

“If you look at all the investigations that these special units have carried out, they are cases that have been fabricated, orchestrated, and framed [...] that in 99 percent of cases are proven to be false by federal courts,” said Murillo, “this means [OXY] is involved in the armed conflict, but also involved in the social and political conflict because they are injecting resources for structures that are dedicated to the stigmatization, persecution, and criminalization of social movements in Arauca.”

Despite decades of U.S.-funded counterinsurgency warfare and criminalization, popular movements in Arauca remain some of the strongest in the country. In order to protect their territory and confront large oil interests, more than 80 local grassroots organizations led an International Humanitarian Caravan to Arauca. The “Caravan for Life in Arauca,” which took place in March 2022, sought to raise awareness and stand in solidarity with the people of Arauca as they denounced the ongoing humanitarian crisis happening in the region.

“It’s incredible how state policies reflect its incapacity to guarantee comprehensive rights to the Araucanos,” said Lidia Afanador, one of the Caravan’s members. “This caravan comes to accompany, to listen, and to support the organizations that live and are present in the department of Arauca.”

On August 7, Colombia’s new leftist government, led by Gustavo Petro, took power. During the campaign, Petro vowed to end Colombia’s historic dependence on fossil fuel extraction and move towards a green economy. He also centered the need to negotiate a peaceful end to the armed conflict with groups like the ELN and strive towards building “total peace” in the country. This would have enormous impacts across Colombia, especially oil-rich regions like Arauca. However, Petro and his government face stiff opposition from multinationals and the United States, whose geopolitical interests have fueled conflict in Arauca for decades.

Despite Biden's campaign rhetoric about environmental sustainability, his administration has doubled down on interventionist policies set in motion by the Clinton administration in the early 2000s, opening up conflict-ridden regions in Colombia to foreign multinationals. The Biden administration has asked Colombia to increase oil exports to the United States by 40,000 barrels per day. The move comes as part of a U.S. diplomatic push to secure global oil supplies and keep a lid on global energy prices after Russia's invasion of Ukraine. These policies benefit corporations seeking profits at the expense of the environment and the lives of people already struggling to build peace after decades of civil war. Far from being a solution to Colombia’s armed conflict, further militarizing the region could prove to be the catalyst for a new wave of violence in Colombia.

Evan King is a member of Witness for Peace Solidarity Collective, which provides physical and political accompaniment to grassroots movements advocating for justice and sustainable economies in the Americas. He is also a Master’s candidate in Political Studies and International Relations at the Universidad Nacional de Colombia