Arbitrary Justice: The Fate of Environmental Defenders in Honduras

Honduran activists jailed in 2019 for opposing mining in their community have faced two years of unfair legal proceedings leading up to their trial. 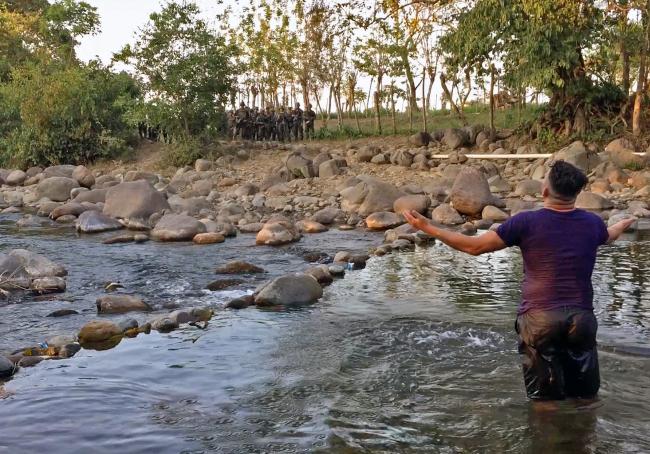 September 1 marks two years since a Honduran judge ordered seven community leaders into pretrial detention for opposing an iron ore mine in Tocoa, a municipality in the country’s northern Colón department. The activists, all from the community of Guapinol, belong to the Municipal Committee for the Defence of Common and Public Goods (CMDBCP) of Tocoa, a network of local groups dedicated to land and environmental defense. They were charged in 2018 along with 24 other CMDBCP members for false imprisonment, aggravated arson, theft and criminal association. At the time of writing, their trial has just been scheduled for the beginning of December 2021.

On August 26, 2019, the seven community leaders voluntarily presented themselves before a court in Tegucigalpa to contest their arrest warrants. A few days later, the judge dropped the most serious charge of criminal association—the only offence legally justifying pre-trial detention—yet still jailed them pending trial. An eighth detainee who had been arrested earlier on the same charges also remains in detention.

The case has set an important and worrying precedent. Honduran authorities charged local leaders defending rivers and a protected natural area with criminal association based on the mining company’s groundless claims. Authorities then prosecuted them through Honduras’s National Jurisdiction Courts—institutions created to hear high-impact organised crime cases and which allow indefinite pre-trial detention—even when the criminal association charge, the only crime justifying the competence of the National Jurisdiction Court, had been dropped. These maneuvers reveal a troubling politicization of the judicial system to criminalize activists.

Their detention kicked off a series of convoluted legal proceedings that have been far from fair, as the University of Virginia International Human Rights Law Clinic demonstrated in an August 2020 report. In November 2020, the United Nations Working Group on Arbitrary Detention also stated that the eight defenders’ detention was arbitrary and called for their immediate release. Honduran authorities have not only failed to comply, but the Supreme Court recently extended without justification their pre-trial detention by six months at the public prosectutor’s request.

Throughout the judicial process, the Guapinol defenders have faced a lack of due process, the constant cancellation and rescheduling of hearings, and the unfounded extension of their pre-trial detention. The process has dragged on, wearing down those imprisoned, their families, and other opponents to mining in Tocoa and potentially elsewhere throughout the country. This agonizingly slow and unfair justice sends a clear message of what awaits others who challenge vested political and economic interests, particularly those opposing the extraction-based forms of development prioritized and intensified in Honduras in the wake of the 2009 coup.

Crucially, in 2019, the interinstitutional Honduran National Protection System, established in law to protect human rights defenders under threat, officially recognized the Guapinol detainees as human rights defenders engaged in legitimate activities with the CMDBCP. The same year, the Washington, D.C.-based Institute for Policy Studies awarded the CMDBCP its annual Letelier-Moffitt Human Rights Prize, and in 2020, the detained defenders were shortlisted for the 2020 Sakharov Human Rights Prize awarded by the European Parliament.

As described in detail in a report commissioned by the Central American Alliance against Mining (ACAFREMIN), members of the Tocoa communities of Guapinol, Sector San Pedro, and Sector La Abisinia have opposed the mine since 2015. At the end of 2014, the Honduran Institute for Geology and Mining (INHGEOMIN) irregularly granted a mining license to the company Inversiones Los Pinares, which, owned by Lenir Pérez and his wife Ana Isabel Facussé, is part of the business empire of one of Honduras’ most powerful oligarchic families. In 2018, another of their companies, Ecotek was granted permits to develop a vast iron pellet processing plant nearby, which has just been completed and will receive iron-oxide from the mine as soon as full production begins. The goal of community opposition is to protect local rivers and the unique biodiversity of the nearby Montaña de Botaderos Carlos Escaleras National Park, where the mine is located. The state has used unsubstantiated criminal charges and prolonged pre-trial detention to punish this community defense of waterways and a protected area.

The Risks of Defending the Environment

In a final report from his country visit in 2019, the UN Special Rapporteur on the situation of human rights defenders noted that in Honduras: “The practice of criminalizing the defence of human rights or threatening to do so is widespread, affecting in particular those who defend land, environmental and civil and political rights and those who report irregularities in State or business operations or violations committed by the Government or companies.”

While being denounced for continued repression and criminalization of dissent, Honduras’s post-coup governments have simultaneously passed legislation in line with international human rights norms and conventions. In 2015, the Honduran Congress approved a law to protect human rights defenders, journalists, and justice officials. It was meant to supposedly address regular threats and attacks against these key actors in Honduras. This included the creation of alert and protection mechanisms for those at risk.

Yet according to Global Witness, by 2016 Honduras was “the deadliest place to defend the planet,” and it has since remained one of the world’s most lethal countries for environmental defenders. The case of Indigenous environmental defender Berta Cáceres is paradigmatic. She was killed in 2016 in her home for her opposition to the construction of the Agua Zarca hydroelectric dam whose potential environmental impact threatened the local Lenca people. High-ranking officials within the company behind the project ordered her assassination. However, until recently, the intellectual authors of the crime had evaded justice. It was not until July 2021, under intense international pressure, that a key figure was held responsible for her assassination. 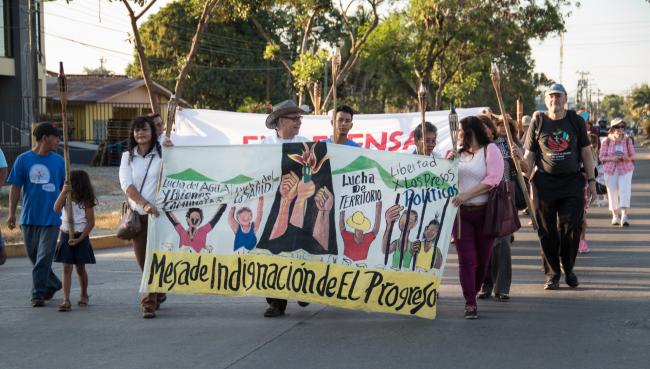 The persecution of communities engaged in historic struggles over land has also played out in the Aguán Valley, a strip of land in the northern Caribbean coast in which Tocoa is located. Land ownership in the Aguán has been particularly contentious and campesino movements to reclaim farmland in the region have faced heavy repression since the 1990s. The relentless advance of African palm monocultures—large swathes of which are owned by the Facussé family, linked to the Inversiones Los Pinares mine in Tocoa—have aggravated the situation. The military and deathsquads have been implicated in dozens of killings and other aggressions, including death threats, terrorizing community members demanding respect for their rights.

In the Aguán, some activists have obtained precautionary measures from the Inter-American human rights system requiring the Honduran authorities to guarantee their protection. However, like Berta Cáceres, who also benefited from such measures at the time of her killing, this has not prevented them from being targeted. Indeed, one of the Guapinol detainees was the recipient of such measures.

The Political Use of Justice

The 2019 Inter American Commission on Human Rights country report on Honduras expressed concern that National Jurisdiction Courts were overreaching their competence to target social activists without justification. Earlier this year, in response to the criminalization and temporary detention of Garifuna leaders, the OHCHR in Honduras also condemned this increasing use of the justice system to criminalize human rights defenders. A local investigative media outlet recently confirmed this pattern of judicial persecution, identifying 38 environmental defenders presently subject to judicial proceedings in Honduras.

As November’s national elections approach, it is likely that tension and violence will increase. This further raises the spectre of the judicial system being instrumentalized to target social actors who mobilise to express political dissent. A 2020 OHCHR report on abuses committed during protests after the contested 2017 elections highlights how the National Jurisdiction was used to unjustifiably keep some arrestees in prolonged custody. Edwin Espinal and Raúl Álvarez, for instance, were held in pre-trial detention in a maximum security, military-run prison for a year and a half before being released on bail pending trial. However, Honduran authorities have not taken steps to review the misuse of the justice system or its chilling effect on those engaged in legitimate protest.

While the recent conviction of one of the intellectual authors of Berta Cáceres’ assassination is undeniably positive news, Honduras is far from addressing widespread impunity. In fact, we must ask whether some degree of justice has been allowed in this particular case primarily because of its worldwide resonance and as a result of international pressure.

Long, convoluted judicial proceedings—twisted at every turn with new charges, evidence, and appeals and overseen by prosecutors and judges acting at odds with international judicial standards on impartiality and independence—seem to currently be one of the chief means through which Honduran authorities seek to curb opposition and dissent. In addition, other means of deterring dissent continue to include the widespread use of threats and smear campaigns as well as attacks.

Despite repeated high-level international condemnation and calls for reform, the Honduran justice system is increasingly prioritizing vested interests, particularly those of domestic and international companies, over the rights of Hondurans. The eight leaders from Tocoa languish in prison on trumped up charges, still uncertain about their future. Meanwhile, even though the project lacks community consent, Inversiones Los Pinares continues to push forward the mining project in hopes of supplying international iron ore markets at the expense of locals’ rights and the environment they live in.

This article is based on research findings from The Juridification of Resource Conflicts. The project is led by the Centre for Latin American Studies (CLACS) at the School of Advanced Study, University of London in collaboration with the Center for Research and Higher Education in Social Anthropology (CIESAS) in Mexico City, and funded by the British Academy's Sustainable Development Programme, supported under the UK Government's Global Challenges Research Fund.

If you would like to learn how you can support the eight Guapinol environmental defenders who remain detained or be up to date about developments of their case, please visit https://www.guapinolresiste.org or follow @guapinolre on Twitter.

Ainhoa Montoya is senior lecturer and director of the Centre for Latin American and Caribbean Studies (CLACS) at the School of Advanced Study, University of London. She is the author of The Violence of Democracy: Political Life in Postwar El Salvador (Palgrave Macmillan, 2018). Twitter @montoya_ainhoa

Rupert Knox is postdoctoral research assistant at the Centre for Latin American and Caribbean Studies (CLACS) and a former human rights researcher at Amnesty International.