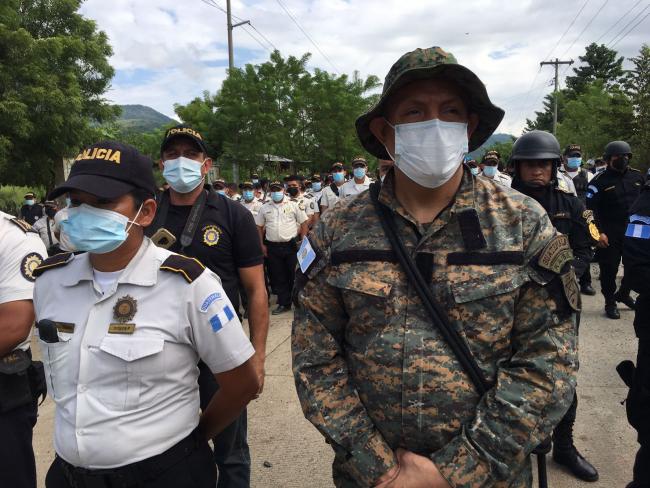 On October 23, approximately 500 police officers and riot police descended on a road blockade in El Estor and fired tear gas at the peaceful demonstrations. For more than two weeks, Maya Q’eqchi’ communities had cut off access to the Fenix nickel mine and processing facility to protest the lack of consultation for the project they say has polluted their air and water.

As clouds of tear gas engulfed them, several people suffered the effects, including a minor who was admitted in a delicate condition to El Estor’s health clinic. “The tear gas made residents who lived [along the] roadside run away from their homes. I saw elderly women and children having trouble breathing as they attempted to escape the scene,” recalled Ana Margarita Chen Xol, who covered the violent incidents for the Mayan station Xyaab’ Tzuultaq’a Community Radio. “The riot police were indiscriminately shooting at people’s bodies.”

Following the repression, the government imposed a state of siege that limits civil liberties for 30 days. Hundreds of soldiers and police officers have been deployed to patrol the area and enforce a curfew, threatening to further jeopardize residents’ lives. Indigenous leaders, journalists, and organizations like Xyaab’ Tzuultaq’a and the social justice association Defensoría Q’eqchi’ have faced arbitrary detentions and persecution after covering or participating in the anti-mining resistance.

“They are criminalizing our resistance, as they have done in the past,” said Macloni Sicaján Jacinto of the Defensoría Q’eqchi’. For years, Maya Q’eqchi’ communities in El Estor have demanded to be consulted over the foreign-owned, illegally operating nickel mine. "Now, under a state of siege,” Sicaján Jacinto continued, “the consultation seems impossible. Repression is always the means to crush Indigenous self-determination.”

The massive show of military force in El Estor to suppress Indigenous communities is reminiscent of the armed conflict that resulted in genocide. The crackdown is the latest manifestation of a backslide in democracy in Guatemala—amid the ravaging effects of the pandemic and the climate crisis—that builds on a violent legacy of dispossession of Indigenous peoples.

“What is happening in Guatemala is shameful yet unsurprising,” Sicaján Jacinto added. 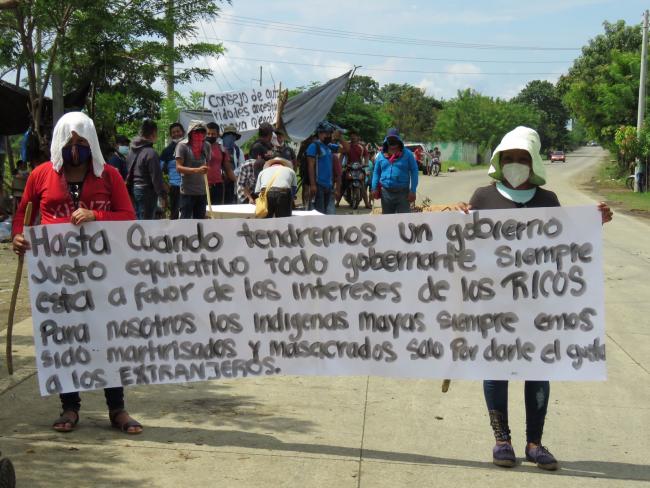 Origins of the Peaceful Resistance

In February 2018, the artisanal fishermen’s union of El Estor filed a writ of amparo, a constitutional appeal, with the Supreme Court over the lack of consultation for the licenses granted to the Fenix ​​mine. Operated by Compañía Guatemalteca de Níquel (CGN), a subsidiary now owned by Switzerland-based Solway Investment Group, the mine went online in 2014 after years of repressive violence, controversy, and community resistance. The fishermen were especially alarmed about the contamination threatening their livelihoods.

“Lake Izabal turned red because of the mine’s toxic waste,” recalled Sicaján Jacinto. “Later studies showed the presence of heavy metals in the water. And yet, the authorities paid no mind and looked the other way.”

In July 2019, the Constitutional Court ordered a halt to the project’s operations for violating the International Labor Organization’s Convention 169, which outlines Indigenous populations’ rights to free prior and informed consent and the need for an environmental impact report. According to the court, the Ministry of Energy and Mines’ process of granting CGN an extraction license in 2006 failed at both.

Although the court ratified its decision in June 2020 and ordered stricter measures because of the Covid-19 pandemic, locals report that the company continues to operate as usual. “That’s why on October 4, we decided to unilaterally enforce the court ruling by blocking the mining trucks’ way since the mine should not be operating,” said Sicaján Jacinto.

According to Sicaján Jacinto, the Ministry of Energy and Mines repeatedly has refused to include the communities that oppose Fénix in consultations, alleging that they fall outside the area impacted by the mine. “Instead of selecting the Ancestral Q’eqchi’ Council, the legitimate authority,” he explained, “the government accredited individuals who are not representative of our interests and serve as lobbyists for the company.”

On October 24, the same day President Alejandro Giammattei declared a state of siege in El Estor, state security forces violently raided the Defensoría Q’eqchi’s offices and Xyaab’ Tzuultaq’a Community Radio. Army troops have been deployed in neighborhoods and the town center, terrorizing the population with their presence. Chen Xol recounted the scene: “Trucks moved into El Estor, with police running next to them as human shields. In the meantime, I had to flee since police raided the radio.”

A Legacy of Violence

The history of community consultations is intrinsically linked to the democratic opening in post-conflict Guatemala. Approved in 1989, ILO Convention 169 on Indigenous and Tribal Peoples has been controversial, mainly because it contemplates the need for the state to carry out a consultation with Indigenous peoples before initiating projects that affect them. Guatemala ratified C169 in 1996. However, the legal framework to implement it has remained only on paper.

Although the state has continued authorized mining and hydroelectric projects around Indigenous territories without consulting residents, two community consultations have been successful. In 2005, in Sipacapa, San Marcos, 2,600 residents voted to oppose a mining project. The following year, 79 communities of Santa Eulalia, San Marcos, also rejected mineral exploitation in their territory. Currently, there are four community consultation processes underway related to extractive projects, according to the Ministry of Energy and Mines. In two cases, court decisions are pending, while two others are in the preliminary phase; among the latter is the Fénix mine in El Estor. Per court order, mining at Fénix was supposed to be halted pending proper consultation, but activities have persisted. 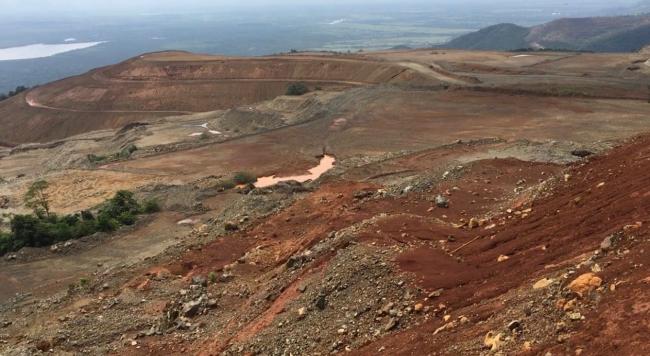 The Fénix Mining Project, known initially as the EXMIBAL Mine, started as a subsidiary of the Canadian company INCO (International Nickel Company). In 1965, half a decade into Guatemala’s 36-year armed conflict, the military government handed the mining giant a 40-year lease on 385 square kilometers. This large tract of land in Q’eqchi’ territory involved the dispossession of communities in the name of boosting extractive industries as part of the national economic development model.

As the internal armed conflict intensified in the 1970s, the mining project struggled to initiate extraction. Violent land conflicts increased in the area, culminating in the 1978 Panzós massacre, widely considered a turning point in the nationwide armed conflict. At Panzós, the army opened fire on Maya people who had marched on the town square, killing dozens. Around the same time, EXMIBAL was involved in the killings of at least several community leaders, as Guatemala’s Truth Commission later documented. By the early 1980s, the military government directed a scorched-earth campaign aimed at wiping out Maya communities.

According to Catherine Nolin, professor of geography at the University of Northern British Columbia, this backdrop was key for the mining industry. “Colonization, international capital, and state terror led to the opening up of the country to foreign investment,” she said. “Extractive multinational companies came into the country as it was reeling from genocide.”

Many Latin American states, including Guatemala, have advocated foreign direct investment from mining companies as a form of development. At the same time, neoliberal globalization has fueled an increasing number of conflicts over natural resource extraction. But for many communities in Guatemala, the arrival of foreign companies that carry out megaprojects like hydroelectric dams and mining concessions marks a “new invasion” or “fourth invasion” after the first, second, and third invasions of Spanish colonization, the creation of the plantation economy between the 1870s and 1930s, and the armed conflict.

For Giovanni Batz, a postdoctoral fellow at the University of California-Davis, the latest violence against Maya Q’eqchi’ at El Estor and other recent repression of Indigenous resistance to development projects “feels like another gestation period” analogous to the 1970s, when violence against Indigenous peoples ramped up before reaching its brutal peak. “Guatemala is not a failed state,” he added. “It is operating under a colonial logic of extraction of labor and natural resources under the euphemistic guise of development.”

Members of the Defensoría and Xyaab’ Tzuultaq’a are also cognizant of these historical patterns. “Many historical events are unfolding simultaneously here,” said one member, who asked to remain anonymous for fear of retribution. “It’s about the mine, but also about a legacy of impunity.”

Living Under a State of Siege

Mining in Guatemala has long been a paradox: how can something linked to structural violence bring development? Economically, mining generates little employment, delivers minimal royalties to the state, and, fiscally, contributes little.

And when Indigenous peoples rise to defend themselves after being marginalized in decisions that impact their lives, they are criminalized. The government has even branded them as terrorists, echoing and perpetuating the racialized stigmatization and exclusion that fueled the incalculable violence of civil war-era counterinsurgency. 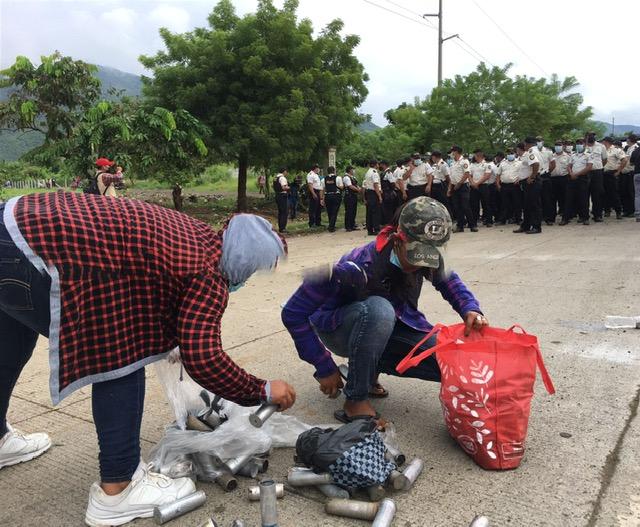 Michael L. Dougherty, professor of sociology at Illinois State University, noted that while “the political cost of repressing Mayan Indigenous people in Guatemala has never been particularly high,” the level of explicit coordination in the crackdown at El Estor is striking. “The fact that the entire state apparatus has been mobilized to suppress a small bloqueo of Indigenous peasants in dramatic, brazen ways teaches us two things: the Guatemalan government is extremely motivated to keep mining at the Fénix site, and they are very concerned about the growing opposition to the mine,” he said.

On the ground, the state of siege is set to deepen the violation of the fundamental rights of land and environmental defenders, social organizations working in the area, and community leaders. “I fear that the evictions of communities that defend their land and territory will increase and accelerate,” said Sicaján Jacinto.

For Nolin, the situation is clear cut: “The only way out is for the mine operation to cease. It has been violently imposed, operating without a legal license. We have to be calling for a full and appropriate consultation process for all affected people.”

The international community must pay attention to how political and ecological crises converge in El Estor. The recent mobilizations against mining projects are the prelude to a debate on environmental justice that Guatemalans want to build. In an age where the effects of climate change will become irreversible, Indigenous peoples must be recognized as crucial stewards and caretakers of a healthy environment for all. As Batz put it, “What people are fighting for is self-determination and the right to live with dignity.”

Vaclav Masek is a Ph.D. student in Sociology from Guatemala at the University of Southern California.