After Moïse Assassination, Popular Sectors Must Lead the Way

Analysis the day after the Haitian president's assassination focused on liberal constitutionalism and elections. This narrow view overlooks the longstanding demands from organized popular sectors. 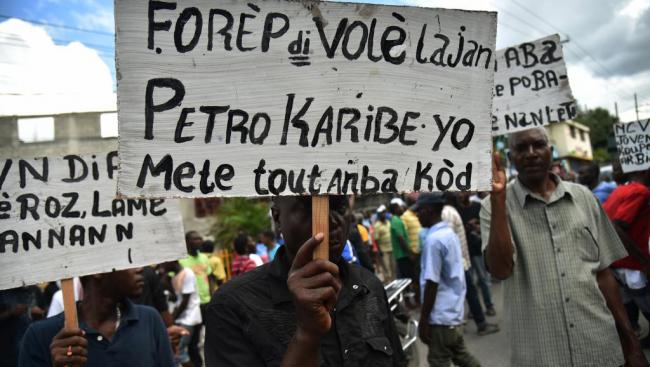 In the early hours of July 7, as-yet-unknown assassins entered the private home of Haiti President Jovenel Moïse, killing him and injuring the first lady, who was flown to Florida to receive emergency care.

In anonymously provided video footage from the scene, a heavily armed man speaking in American-accented English claims to be working for the U.S. Drug Enforcement Authority. In his address responding to Moïse’s assassination, Interim Prime Minister Claude Joseph also said that some of the assailants spoke Spanish.

The very fact that the heavily armed assailants spoke at least one foreign language like a native speaker should offer pause. Who are these men? If they don’t work for the U.S. government, which is unlikely, who do they work for? Who hired them? Who let them in the country? Where did they get their guns? Following the news, the streets in Port-au-Prince were eerily quiet, permeated by a climate of confusion and fear.

This confusion has not stopped foreign talking heads and mainstream media from filling the information void with ready-made racist stereotypes of the first nation that ended slavery and colonialism on its own terms. These accounts are filled with now-familiar statements about not only “the poorest country in the hemisphere” but allusions—and sometimes direct statements, as in the case of former French Ambassador Didier LeBret—that Haiti is “tragic,” “unruly,” and “ungovernable.”

Some, like Colombian president Iván Duque, are openly calling for a foreign military intervention, this time not even using the veneer of the multilateral United Nations that militarily occupied the country for 15 years. Such calls apparently forget (or purposefully hide) the fact that there are far more guns in Haiti in the wake of the UN military mission than before. Immediate responses also fail to mention that the U.S. is by far the largest arms dealer in the Americas and certainly in the Caribbean. While it is good that heads of state responding to the killing of Moïse offer concern for the loss of life, their comments are not only too late, they cover their own role in recent events.

One problem with these stereotypes that have been called upon in a moment’s notice is that they produce the very racist outcome that serves to justify them. Rather than speaking authoritatively while standing atop long-standing racist tropes, it is important more than ever to be humble, ask questions, and focus on the deeper context. 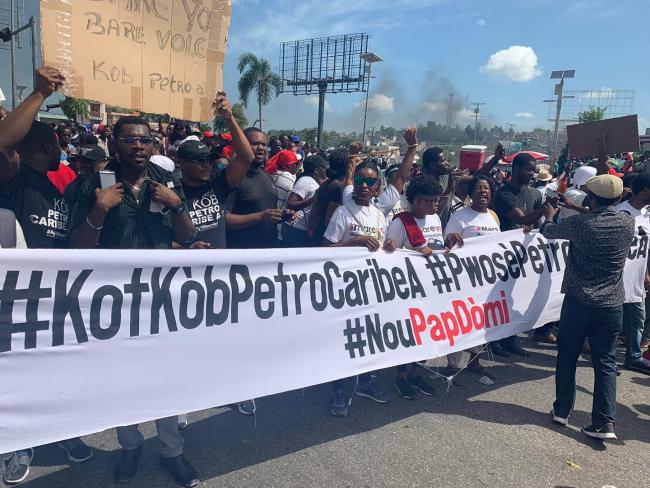 From Peyi Lòk to Violent Rule by Decree

The violence that in the end consumed the president’s life was not random; it was planned, supported, and orchestrated by a cluster of actors, including President Moïse himself. He strengthened his grip on authoritarian rule to stamp out the popular revolt that began exactly three years ago, when his government announced a 36 percent hike in gas prices called for by the International Monetary Fund. On July 6, 2018, people took to the streets in the first peyi lòk, lockdown or general strike.

Not only did the Haitian government back down, but the first of Moïse’s prime ministers fell on the sword, resigning as a result. A month later, the revolt took direction from the still-unanswered question posed on Twitter, #KòtKòbPetwoKaribeA? Where are the funds from Petro Caribe? The government had little to show for billions of dollars earmarked for development. This historic movement and cross-class alliance succeeded in forcing the Appeals Court to investigate state corruption, issuing a report at the end of May, 2019 that implicated Moïse—as well as his predecessor Michel Martelly, and Martelly’s Prime Minister Laurent Lamothe—in the misuse or disappearance of over $2 billion in PetroCaribe funds.

As the movement gained steam, Moïse increasingly turned to authoritarianism and street violence. An early sign was the November 2018 massacre in the Lasalin neighborhood, a stronghold of resistance to Moïse and his ruling party. On January 13, 2020, Moïse seized the opportunity provided by the expiration of parliament’s terms—ironically the day after the 10-year anniversary of the deadly earthquake—to begin ruling by decree.

Decrees increasingly consolidated power; Moïse labelled forms of street protests “terrorism” and created an intelligence agency last November. This slide towards authoritarian rule is most clearly seen in a unilateral plan to hold a constitutional referendum, twice postponed and currently scheduled for September 26. The referendum proposes amending the constitution to centralize power in the office of the president, reversing decentralization gains in Haiti’s 1987 constitution.

Meanwhile, to strengthen his position, with the approval of the UN representative in Haiti, Helen Meagher La Lime, Moïse made alliances with gangs, who federated and terrorized residents of poor neighborhoods to quash opposition mobilizing. But because they were poor, their lives–and their deaths–did not matter to the powers that be, in Haiti, Washington, Paris, or Brussels.

Unfortunately for Moïse, his reliance on gang leaders such Jimmy Cherizier (a.k.a. “Barbecue”), whom Haitian human rights organization RNDDH identifies as responsible for dozens of politically-motivated deaths, would come back to haunt him. Media outlets boosted Barbecue’s “signal,” which reached a pinnacle during his June 23 press conference where he publicly declared his opposition to Moïse.

The timing of these events raises suspicions. Barbecue’s break with Moise coincided with a massive uptick in violence and sealing off large segments of Port-au-Prince, effectively cutting off the south of Haiti from the rest of the country.

The assassination also occurred during the biggest institutional void. The modified constitution of 2011, which Bill and Hillary Clinton pushed for, changed the succession of who would replace a president. The 1987 constitution names the head of the Supreme Court, and the 2011 constitution, which was rushed through by Martelly, names the prime minister. Also on June 23, René Sylvestre, the head of Haiti’s Supreme Court, died as part of a deadly wave of Covid-19. Also last week, following the high-profile murder of journalist Diego Charles and human rights activist Antoinette Duclaire on June 30, the Organization of American States pressured Moïse to name a new Prime Minister. Moïse tapped Ariel Henry as his seventh prime minister since taking office in 2017. It remains unclear whether Joseph actually stepped down, and Henry was set to be sworn in on Wednesday.

In other words, the void caused by Moïse’s systematic centralization of power–aided and abetted by the international community, particularly the “Core Group”—couldn’t have been deeper. More troubling is interim Prime Minister Joseph’s invocation of a 15-day “state of siege” imposing martial law. The Constitution allows for a state of siege in the case of a foreign attack, raising questions about unsubstantiated comments about “speaking Spanish.”

Other keywords being battered around in the aftermath of Moïse’s killing are “democracy,” “elections,” and “rule of law.” Such comments are often tinged with more than a hint of familiar racist disdain for the country that offered liberation of enslaved people anywhere in the world. In the abstract to a media public in the so-called “Western world” of settler colonies like the United States, and former colonizers like France who are trained to forget and only react to headlines, these trappings of liberal constitutionalism sound good.

Looking at the deeper context, foreign use of these keywords and promotion of elections at any cost leads to the very problems being discussed. For example, in 2015 and 2016, the United States and the so-called “Core Group” pushed through elections that independent observer missions and the Haitian commission denounced as fraudulent.

While it is understandable that the headlines focus on the assassination of Haiti’s leader, it is necessary to underscore the issues faced by Haiti’s poor rural and urban majority and the demands of Haiti’s organized popular sectors. As many as 18,000 people, mostly poor, have fled their homes in the past few weeks, swelling makeshift camps. The gas shortage caused by armed control of the ports has led to one of Haiti’s worst instances of food insecurity as 4.4 million (out of a total population of 11 million) are without access to food. Meanwhile, President Moise’s decrees expropriated peasants from their land to the benefit of Haitian oligarchs and transnational corporations, as was the case in Savane Diane, where Andre Apaid is building a stevia plantation for Coca Cola.

Nearly none of yesterday’s coverage mentioned the longstanding demands for justice raised by social movement organizations: the end to impunity starting with the PetroCaribe trial, the engagement of the state in the management of life in the country through the provision of housing, schools, electricity, water, and hospitals, the redistribution of land on which to grow local foods and on which to establish lives according to their vision of the human and healthy (non-transactional and non-exploitative) human relations.

This power vacuum with no legitimate heir is the recipe for a power grab, wherein the strongest will prevail. Whose interests are served in this chaos? Who stands to gain? At the moment, several factions, mercantile elites and gangs each have power and control.

Activists in Haiti are clear that they do not want a foreign invasion or an occupation force. Not only woefully failing at its mission of disarmament, the 15-year UN mission that introduced cholera to Haiti and a wave of sexual violence also provided stability for foreign extractivism and profiteering in tourism, agribusiness, textile, and mining sectors.

It is clear that we do not have the answers today. We may never know who was in on the plot to assassinate Haiti’s president. We need to be asking different questions. Or rather, we need to take on different actions that concretely contribute to a people’s agenda. What if instead of scrambling for news on Haiti and deciphering the real issues from the analyses and opinions of international Haiti experts, we supported the Haitian people’s efforts to tell their own stories and share their own dreams directly with us?

Mamyrah Douge-Prosper is an Assistant Professor of Global and International Studies at the University of California, Irvine. Prosper's work centers around social movements in Haiti. She is also the International Coordinator with Community Movement Builders in the United States. In that capacity, she serves as the coordinator of the Leve Kanpe Avèk Ayiti International Coalition that includes organizations in Canada, the U.S., Dominican Republic, Puerto Rico, Brazil, Argentina, and Uruguay working to amplify the struggles of the people of Haiti. Prosper is a founding member of the Black Radical, a multi-lingual Pan-African media collective.

Mark Schuller is Professor of anthropology and nonprofit and NGO studies at Northern Illinois University and affiliate at the Faculté d’Ethnologie, l’Université d’État d’Haïti. Schuller’s research has been published in over forty scholarly publications. Schuller is the author or co-editor of eight books—including Humanity’s Last Stand: Confronting Global Catastrophe—and co-director/co-producer of the documentary Poto Mitan: Haitian Women, Pillars of the Global Economy. Recipient of the Margaret Mead Award, Schuller is President of the Haitian Studies Association and active in several solidarity efforts.