Hondurans in the U.S. Fear Vote Suppression in Sunday Elections

Days before the elections in Honduras, many living outside the country worry they won’t be allowed to cast their ballots on November 28. 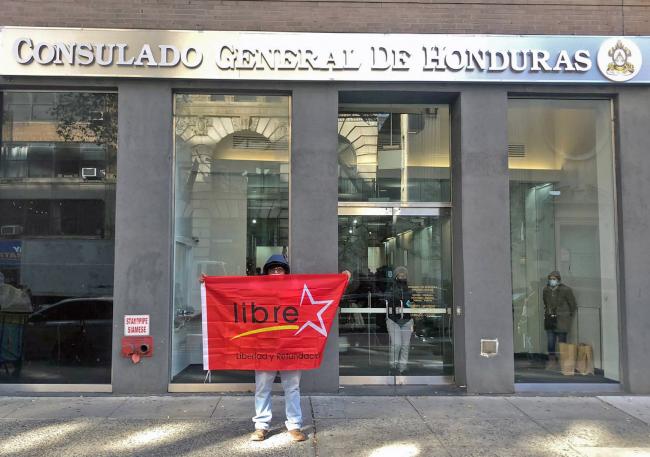 The elections this Sunday, November 28 in Honduras are one of the most important in the country’s recent history. Since the 2009 coup against former President Manuel Zelaya, the country has been under the control of the conservative National Party.

President Juan Orlando Hernández—implicated in his brother’s drug trafficking conviction by the Southern District Court of New York, and whose reelection in 2017 is considered by many to have been fraudulent—will be leaving office after eight years in power. Now, the opposition party Libertad y Refundación (Freedom and Refounding), known as "Libre," is vying for a comeback.

In a country of about 9.5 million, at least 746,000 Honduran citizens were living in the United States, according to the 2019 U.S. Census. This year, it’s possible that fewer than 13,000 of them will be able to vote in the upcoming elections because they don’t have up-to-date National Identification Cards. The old cards expired on November 15, and passports don’t constitute sufficient documentation, according to the National Registry of Persons and the National Elections Council.

For the first time since the coup, these elections represent the opportunity to challenge the National Party’s rule, which is widely regarded as a “narco-dictatorship” due to the many connections between the ruling and business elite and drug traffickers. Hondurans are eager for new leadership that will focus on providing for the people, rather than putting money in their own pockets.

On this Sunday’s ballot, Libre presidential candidate Xioamara Castro, the wife of ousted President Manuel Zelaya, is facing off against the National Party candidate Nasry Asfura, a two-time mayor of the country’s capital Tegucigalpa, who has been implicated in large-scale drug-trafficking schemes. A late October poll had Castro in the lead over Asfura by 17 points.

Voting Challenges for Hondurans in the Diaspora

Hondurans living abroad in the “19th Department,” a term used to refer to the entire diaspora, can’t apply for a National Identification Card at their local consulates because the ID cards are administered by a different agency, the National Registry of Persons. When the Registry came to the United States in June, they enrolled just under 13,000 people. Those people then had to wait months, for no stated reason, before their documents would be given to them.

Since the start of 2020, Juan Flores, a Honduran activist in Florida and founder of the nonprofit Fundación 15 de Septiembre, has been fighting for the right to vote for himself and his fellow countrymen abroad.

“We were excited that there was going to be enrollment abroad, and we’d be automatically able to vote,” he said in a phone interview. At that time he didn’t realize the enrollment would be so limited. Now, Flores said, “we feel we are being completely tricked by the Honduran authorities.”

Lucy Pagoda Quesada, the coordinator of the Libre Party in the 19th Department, announced on a Facebook Livestream Wednesday evening that, of the 1,420 Hondurans enrolled over the summer in the New York area, only 50 had received their IDs as of Wednesday, November 24. That was their last day to do so because the consulate that would distribute them is closed the rest of the week for the Thanksgiving holidays.

Quesada suspects the IDs haven’t been handed out because, she said, the diaspora opposes the National Party.

“Hondurans living abroad are the opposition—and the government knows it—so they’re doing everything they can to silence us,” she said.

When asked why the Honduran diaspora hadn't received their new IDs in time to vote, a consulate worker in New York said they weren’t “up-to-date on that information” and that the consulate only dealt with renewing passports. According to The Special Law for Elections Abroad passed in 2001, consulates are considered voting sites. But consulate workers also weren’t authorized to say whether voting would take place at the consulate on Sunday or if they themselves were voting.

The Honduran National Registry of People did not return a request for comment as to why so few people were registered for the new ID and why those that were haven’t received it yet. The National Elections Council in Honduras has not released information regarding overseas voting.

Josue Zelaya, a member of Libre who also lives in New York, said the situation this year is par for the course.

“We’ve been asking the government to permanently open a National People’s Registry in every consulate, but unfortunately the narco government isn’t interested in documenting us,” he said.

Zelaya was a poll worker during the 2017 election and remembers having to turn away most people that showed up to vote.

“It was difficult to witness the deception and sadness in their eyes when they knew their rights were being denied,” he recalled.

Confusion Outside the Consulate

At the New York City Honduran Consulate, people are seeking information. Everyone in the crowd gathered outside has a different idea of what’s happening. Of 11 people interviewed as they were exiting the building, only two had the document required to vote—and both of them received it when they were in Honduras.

Esmeralda*, from the department of Cortés, is a fervent supporter of Libre. “We want a real change,'' she said. Pointing to the consulate, she added,  “and here they’re violating our right to vote. My entire family of 30 people are all for Libre...to say no to violence, to unjust deaths, and to corruption.”

She hasn’t been able to apply for a document. “Whenever we go inside the system breaks down,” she said.

Jairo, who’s lived in the United States for three years, also plans on voting for Libre. He didn’t know he needed the new document. “I’ll have to request it then,” he said.

Torre Montes applied for the ID in Elizabeth, New Jersey over the summer, but when she went in to ask for it, she was told it wasn’t ready.

Roberto Carlos Garcia has lived in the United States for 31 years and says he’s voted at the consulate in every election since 2005. He plans to vote for Libre—“it’s not the best but it’s the only option”—but he’s still waiting to get his ID.

“I know they have them there, they just don’t want to give them out,” he said.

Minor Lagos, who arrived in the United States six months ago, applied for the ID while in Honduras, but he’d have to travel back to pick it up. His biggest priorities are “safety and employment,” and he’d like to vote for Libre.

Many people said they were planning on coming back to the consulate on Sunday “to see what happens,” but as things stand, the likelihood that they will be able to vote appears slim.

Others expressed distrust in their country’s political system, stating that even if they could vote, they wouldn’t.

“It’s all the same. Every year it’s going to get worse and worse,” said Will, who came to the United States 27 years ago. “They’re looking out for themselves, they’re not looking [out] for the people.”

“I’m not planning on voting until the politics in my country change,” said Erasmo Antonio Tábora García, a Honduran influencer who goes by “El Maje Del Video” on TikTok. “Presidents only come to steal money.”

Even Flores, despite fighting for his right to vote, doesn’t have much faith in any of the candidates. “I would vote for someone independent, just to let them know I exist,” he said.

For Hondurans in the LGBTQI+ community, the situation is even more complicated. Aneiry Zapata, a transgender Garífuna activist with the Black LGBTQIA+ Migrants Project, hasn’t been able to obtain a passport for the past five years, she said in a video interview. That’s because Honduras doesn’t allow citizens to change their sex or gender on their legal documents, despite a recent International Human Rights Court calling for them to do so.

Zapata was told “to go without makeup and without a ‘wig’” to get a passport with her birth name on it.

“I’m considering no longer identifying myself as Honduran,” she said, “I have Honduran parents but I’m of the wind,” because “Aneiry doesn’t exist” to the Honduran government.

Despite that, she would vote for Libre if she had the choice, because it represents “the least bad” option. Despite saying she respects LGBTQI+ rights, Castro is opposed to marriage equality, and as a “Catholic” doesn’t fully support abortion—two major issues for feminist and LGBTQI+ groups.

With only two days to go before the elections, the Honduran population living in the 19th Department remains concerned and confused about whether they will be allowed to vote. The majority of the people interviewed outside the consulate said they would make an attempt on election day, but for now it appears likely their vote will be suppressed.

“The 19th Department’s vote is symbolic [due to its suppression], but it’s also golden,” said Quesada, “because it’s a vote of punishment” against the government.

Dashiell Allen is a freelance journalist based in New York City. He is a regular contributor to the Honduran LGBTQ publication Reportar Sin Miedo.

*Editor's note: To protect, their identity, some people preferred not to disclose their last name.