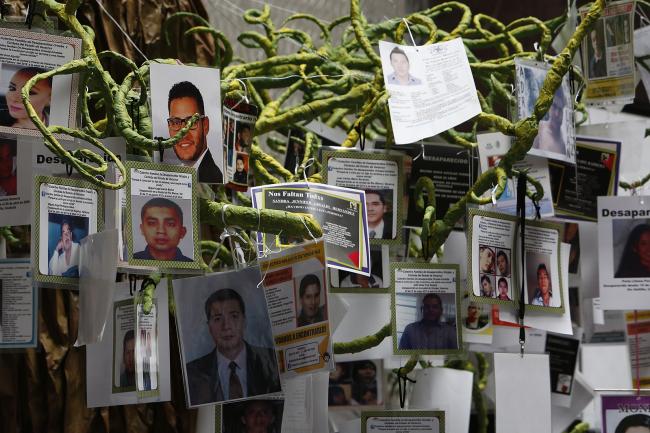 Parts of this article were originally published in Spanish by A dónde van los desaparecidos on September 27, 2022 and by The Washington Post Opinión on November 4, 2022.

On October 31, the Interdisciplinary Group of Independent Experts (GIEI) investigating the Ayotzinapa case released the results of their independent analysis of 467 screenshots that the government’s Commission for Truth and Access to Justice (COVAJ) presented in a report on August 18 of this year. These screenshots purport to contain WhatsApp messages between five different people who participated in the forced disappearance of the 43 Ayotzinapa students in September 2014.

The 467 images were obtained by the COVAJ, which gave the screenshots to the press and published them in a redacted form without first sharing them with the GIEI or the Special Investigation and Litigation Unit for the Ayotzinapa Case (UEILCA). The COVAJ, which President López Obrador established by decree in his first act in office in December 2018, showed the censored version of its report to the families of the 43 missing students and their legal representatives just hours before publicly releasing the findings.

These screenshots are the new evidence that distinguishes the COVAJ report from three GIEI reports and all the other prior investigations. According to the COVAJ, these images supposedly provide evidence for an alternative version of events that the current government seeks to present in place of the previous administration’s attempt to cover-up state involvement in the crimes.

Known as the “historical truth,” the Enrique Peña Nieto administration claimed that police officers in Iguala stopped the students and turned them over to a small group of cartel hitmen, who then spent that night incinerating all 43 students in an open-air trash dump, in the rain. The “historical truth” has been debunked by numerous eye-witness testimonies and independent forensic analyses. It has also been shown without a doubt that the confessions the government used to build its case were produced under torture. In addition to medical records and testimonies, we know this because the torturers recorded videos of their acts, and many of those videos have been leaked to the press.

The new narrative suggests that the 43 missing students were separated into three groups and killed in brutal ways; that the colonel in command of the 27th Infantry Battalion of Iguala allegedly personally ordered the murder of six of them, who four days later were still alive; and that subsequently their remains were allegedly exhumed to be moved to new locations, including the Battalion 27 base.

Weeks after the report was released, journalist Peniley Ramirez published some of the unredacted screenshots on her Twitter account on September 24. In her column in Reforma, she wrote that a source leaked the images to her. She did not question the veracity of the information at any point. She did not speak to the families. Thus, once again the families of the missing students were forced to read a horror story about their children in a public forum, even though the information supposedly supporting the grotesque tale—which mentioned incinerations and dismemberments—had not been verified.

Almost eight years ago another journalist did something very similar with the “historical truth.” Esteban Illades published an article in Nexos magazine—without going to Ayotzinapa and without talking to the surviving students, other witnesses, or the families of the disappeared—in which he dramatically narrated the content of the case file that was leaked to him. The testimonies included in that file were made under torture to support a false version of the attacks.

After the COVAJ’s press conference and Ramírez’s leaked images, I wondered if we were then facing a new, digital Cocula trash dump: a place where nothing happened. And in early September I asked whether López Obrador and his government wanted to cover up for the army's high command. That question still seems pertinent to me.

The GIEI, which has been investigating the mass forced disappearance since 2015, just confirmed what I saw coming: the 467 screenshots that officially exist on a USB memory stick—not on the original telephone devices—present several anomalies that make their verification impossible. According to the expert report carried out outside the country at the request of the GIEI: in 181 of the screenshots, the date on the image and the date in the metadata do not match; in several images there are elements of the WhatsApp application—a double blue checkmark, a video call icon—that did not exist on the date that the messages were supposedly sent and received.

The GIEI also emphasized that the 83 arrest warrants in the case produced by the special prosecutor's office are not based on and have no relation to the screenshots or the information in the COVAJ’s report.

Some urgent questions arise: If the screenshots are false, who fabricated these images? Who gave them to COVAJ? Why did the COVAJ decide to hide these images, against all protocols and against the established practice of sharing all investigative information confidentially between the GIEI, the COVAJ, and the special prosecutors and, once verified, with the families of the 43 missing students?

These questions, to me, are haunted by another key question that dates back to October 2014: Who planted the incinerated piece of Alexander Mora Venancio's bone on a tarp next to the San Juan River in Cocula in the midst of an illegal operation involving the Attorney General’s office, the Navy, and the Federal Police? Forensic analysis of the bone fragment confirmed Mora Venancio’s identity in December 2014.

Many wonder if the COVAJ report and the screenshots are part of a “new historical truth,” or “histrionic truth.” The GIEI, in their press conference, said no. They described COVAJ's actions as “clumsiness” that risks overturning the case and guaranteeing impunity.

The “clumsiness,” however, is of such magnitude that the GIEI decided two of its members should withdraw from the case—in protest, it is understood—and the other two continue on as a “follow-up mechanism” just as they did after the Peña Nieto government refused to renew a mandate to provide technical assistance in the investigation in 2016.

It is possible that the COVAJ officials who decided to break the protocols, keep the information to themselves, publish it in a censored manner, and then leak the images to a reporter (her source may have been someone else, but if so, who?), did so thinking that they had solid and truthful information.

But the point is that such brutal handling of this now-disqualified evidence—because I insist: to force the families, after all they have suffered, to read another unverified horror story in the media is in itself an atrocity—did not happen in a vacuum. Rather, it was part of what appears to be yet another coordinated maneuver from the highest levels of government to bring down the case—to detonate it from within, tire the investigators, and buy time while saying in front of the cameras that the administration is committed to the families and to the truth.

This all began with the presentation of the COVAJ’s report on August 18. It continued the following day with the televised arrest of former Attorney General Jesús Murillo Karam, which was made with a hastily assembled accusation. At the same time, the special prosecutor in the case, Omar Gómez Trejo, was on a plane to Israel to talk to Israeli authorities about Mexico’s extradition request for the former director of the Criminal Investigation Agency, Tomás Zerón, now a fugitive accused of torture and obstruction of justice in relation to the Ayotzinapa cover-up. Murillo Karam's initial hearing before a judge was carried out by prosecutors from a different office who did not know the case.

Afterwards, a series of moves within the Attorney General's office contributed to the mishandling of information: internal affairs officials and other agents took over the special prosecutor’s office; detectives working with the UEILCA were withdrawn from the case, paralyzing the unit’s work; the special prosecutor and several members of his team resigned due to the interference in their investigation; and a new prosecutor—a life-long friend of the president with no relevant experience and who does not know the case—was appointed.

Weeks later, in the midst of a political debate over shifting the National Guard, Mexico´s new federal police force created under López Obrador, from civilian to military control, 21 arrest warrants were cancelled, 16 of them against military personnel.

At the march to commemorate the eighth anniversary of the disappearance of the students at the end of September, the message from the mothers and fathers were clear: the army should be prosecuted and the investigation should continue to move forward with verified evidence.

And yet, the questionable handling of information was also evident in the media. In addition to the leaks, on October 26 the The New York Times published an article that revealed the recording of a meeting in Israel between Alejandro Encinas, undersecretary of human rights and head of the COVAJ, and Tomás Zerón, the fugitive accused of torture and forced disappearance.

In the recording, Encinas offers the president’s guarantee of impunity in exchange for information about the students’ whereabouts. Encinas did this without any legal authority to negotiate such a deal.

As if that were not enough, a hack of the Army's emails last month revealed that Secretary of National Defense Luis Cresencio Sandoval has been advocating to the president in favor of some of the detained military personnel.

And yet, despite all this “clumsiness,” in one of his recent morning press conferences President López Obrador described the resignation of the prosecutors who would not accept the manipulations of the case as a “kind of rebellion.”

It may not be a new “historical truth,” as the GIEI indicated in their press conference, but these latest missteps are serious. And what they achieve is halting the advances in the investigation, breaking the GIEI, making the families suffer more, and creating the conditions to once again ensure impunity.

Even if this is not a “histrionic truth,” there is something unforgivable and perverse about giving the families of the disappeared students a bit of hope only to detonate it from within.

John Gibler is the author of four nonfiction books about politics in Mexico including I Couldn’t Even Imagine that They Would Kill Us: An Oral History of the Attacks Against the Students of Ayotzinapa.