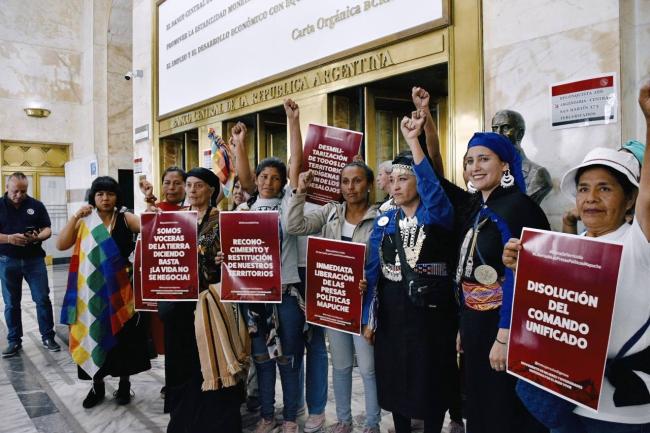 On a cold November morning in Buenos Aires, Argentina, scores of women began gathering in the central district of the capital. Some of them had made arduous journeys of over 1,000 km across the country; most of them were Indigenous. Once the crowd had swelled and the leaders were accounted for, the women, wearing traditional Indigenous dress, solemnly headed towards the Banco Central. Once inside the building their purpose was made clear: to protest the brutal attempted femicide of a 12-year-old Wichi girl who had been raped and left by the highway to die in Salta, northern Argentina.

Moira Millan, Mapuche-Wichi author and Indigenous rights activist, made an impassioned speech outside the Bank to the crowd that included journalists and sympathizers. “Just days ago, a Wichi girl was raped, strangled, and is fighting for her life. Our daughters continue to be raped and nobody cares. We are here to speak to the president of the Bank because we believe it’s time to develop a budget to save lives and construct a national model for life and not just death,” she said, voice trembling with anger and sadness.

The latest episode of “chineo,” a term used in northern Argentina to refer to the racist colonial practice of raping Indigenous women and girls by non-Indigenous (often white) men, follows a pattern of violent sexual crimes. Indigenous women’s groups claim these crimes are just one aspect of Argentine repression against Indigenous peoples and territory.

A History of Usurpation

The Mapuche and Wichi are two of the largest of Argentina’s 35 Indigenous groups. They make up nearly 3 percent of the country’s total population of 40 million, although in some regions such as Jujuy, in northern Argentina, Indigenous people account for 15 percent of the population. According to the 2010 census, there are currently 205,009 Mapuche in Argentina.

Despite official state recognition of rural land ownership for Indigenous peoples established by the government during the 1960s, Mapuche/Wichi claims to land are as fragile as they were during the bloody Conquest of the Desert military campaign in 1879, when many Indigenous people were killed or forced to flee the region due to a violent imperialist purge. Since then, dispossession of Indigenous communities in Argentina has steadily increased and their rights have been eroded. As a result of successive waves of displacement across the country, Argentina’s native population often lives in situations of extreme poverty in cities or remote regions, with inadequate access to food, medical care, and education.

According to the Argentine Constitution, Indigenous peoples are the legitimate owners of the lands where their ancestors were born. However, if the land isn’t registered as such, then it is viewed as fair game for magnates and investors keen to exploit the gas, mineral and agricultural resources, which is especially the case in resource-rich Patagonia. Mapuche communities that attempt to settle on ancestral lands in Argentina’s Patagonia are met with violent repression and their claims are criminalized in local courts. Without the aid of the Argentine state, multinationals such as Benetton—which controversially acquired 2.2 million acres of contested land in 1991—would be powerless to evict.

The right to live on ancestral lands transcends the material: Indigenous communities' identities and cosmovision are synonymous with their territory and access to traditional medicine, native plants, and lifeways that are intrinsically tied to the land.

Only since the mid-1990’s have Indigenous resistance movements begun to gain momentum. As the Argentine state—under the duress of the International Monetary Fund—began its mass transfer of public assets to the private sector and disputed land was sold off to large multinationals, communities began to organize in response. However those that galvanize support by occupying land, rebuilding homes, and planting crops face increasing repression. Today Indigenous activists face violent eviction and their leaders are arrested, homes burnt down, animals shot, and crops destroyed. To date there are scores of Mapuche political prisoners indefinitely detained in provincial prisons all over Argentina.

Last month, 250 heavily armed troops raided a community of just 30 people, including children, at a site of ancestral reclamation in the village of Villa Mascardi in Bariloche. Seven women, including an important spiritual leader and a woman who was 40-weeks pregnant, were detained along with their small children. Four of the women were subsequently transferred more than 1,500 km away to the Ezeiza prison with no access to legal recourse or clarity about why they had been arrested. The remaining three remain imprisoned with their children in Bariloche. The arbitrary detentions of these women, which became known as the Villa Mascardi Crisis, constitute a grave violation of their human rights. Andrea Despo, one of the women detained at the site and later freed, accused the Argentine state of “inflicting psychological torture” on the women detained in Bariloche—six of whom are still in prison—and orchestrating a “set-up designed to embellish the notion of the internal enemy.”

“Mapuche and Wichi children are born knowing what prison is, just because they were born Mapuche and wish to live on their ancestral territories,” said activist Moira Millan. “Everyone is silent before this genocide, everyone enables this; the Pope with his silence, the President and Vice-President with their indifference, a large majority of Argentina with its indolence, the hegemonic media with their racist lies. But the desperate cries of that Wichi girl reached our ears and hearts, forcing us to take to the streets and say no more.” 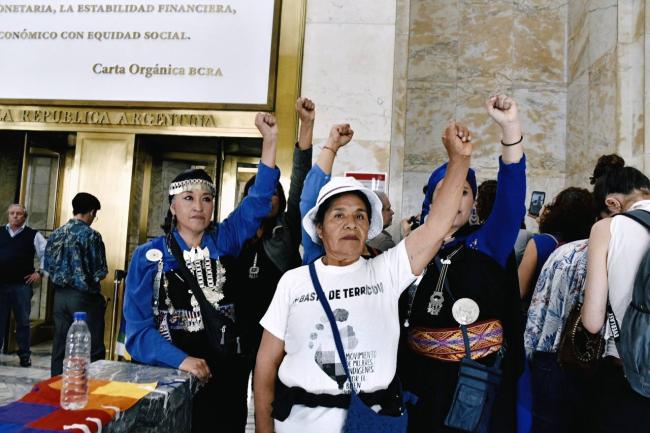 Outside the Banco Central protesters chanted, “Enough is enough!” and “Basta de chineo” The racist term “chineo” originates from the early stages of colonization in which the  Spanish referred to Indigenous women as “chinas”’ (Chinese), due to their physical features such as  straight, long black hair and almond shaped eyes. The act of white colonizers violating Indigenous women became synonymous with European dominance over ancestral peoples and territories. It is a colonial crime that continues to be perpetrated across Argentina, creating a culture that allows white (criollo) men to gang rape Mapuche women with impunity—a racialized patriarchal practice in which there is no distinction between occupied land and access to Indigenous womens’ bodies.

The manifesto of the Basta de Chineo states: “We use the word chineo as a political category to redeem the origin of this colonial crime that accounts for how our territorial bodies have been racialized and our lives devalued. We are going to continue using it until impunity is eradicated.”

Even the use of the term “chineo” implies a disregard for Indigenous life, reflects Reynaldo Mariqueo from the UK-based nonprofit Mapuche International Link.

“The use of the word for certain Argentine sectors is not as grave as ‘rape,’” said Mariqueo, highlighting the racist undertones of the term. “There is visual and written documentation from that period (Conquest of the Desert) showing Mapuche women suffering sexual abuse at the hands of the colonizing soldiers. It is lamentable that this abhorrent and cruel practice has still not ended.”

According to the National Institute Against Discrimination, Xenophobia and Racism (INADI), the Argentine government agency that monitors racism, there were 25 reported incidents of sexual violence against Indigenous women in the northern province of Salta in 2022, but the numbers are surely higher since victims are too afraid and distrustful of criollo institutions to approach local authorities. However, patience over inaction is wearing thin. When two girls under the age of 14 were found raped and murdered in northern Argentina in June 2022, there was a national outcry leading to the organization of the Third Plurinational Parliament of Women and Indigenous Diversities held in Salta, one of the most affected provinces, where a strategy to combat the lack of government action was devised. The event was organized by the Movimiento de Mujeres Indígenas Por el Buen Vivir (Movement of Indigenous Women for Living Well), which invited diverse women's groups to form a campaign to make chineo a hate crime. In July of 2022 more than 200 women from 20 groups took part in the launch of the “Basta de Chineo” (No More Chineo) Campaign and submitted proposals to the government to have the term denominated a hate crime punishable by law.

Thanks to the women’s incessant campaigning, the movement is slowly gaining traction across Argentina. Argentina’s Minister for Women, Gender, and Diversity Elizabeth Gómez resigned after the Villa Mascardi incident. In her resignation letter, she said that the violent actions of the police “are incompatible with the values I defend as a political project. Personally, I believe these actions crossed a line, and consequently I must step aside so that another person may take on the important responsibility to lead this Ministry.”

Campaigners are urging Argentine lawmakers to consider the application of maximum sentences for chineo crimes with no recourse to bail for perpetrators. They also propose seizing the assets of offenders to create a compensation scheme for victims. Feminist groups are also pressuring local governments to work with women’s groups to create a safe environment for Indigenous women to denounce these abuses, and educate them about their rights so they can better advocate for themselves.

The detained Mapuche women are still incarcerated and no formal charges have been brought against them. The Gremial de Abogados, a legal defense group that is representing the women, has asked the authorities to set a date for the women to be freed but have been rejected by the Federal Chamber of Appeals. Authorities claim to be too busy for an in-person appeal and have rejected requests for a virtual appointment. Delaying justice for these women and many other Mapuche activists serves only to fan the flames of racial conflict and cement the determination of feminist Indigenous activism in Argentina.

Like many others that have come before her, the young Wichi girl who was violently assaulted in Salta last November is still recovering from her ordeal and awaiting justice.

Carole Concha Bell is a PhD student at King's College London. She is researching Chilean post-dictatorship second generation diaspora literature in relation to 'El Retorno' at the Spanish, Portuguese and Latin American Department (SPLAS). She is also a regular contributor to national and international media on the subject of Chilean politics and Indigenous rights.