The Mexican Health Care System Under the Administration of AMLO 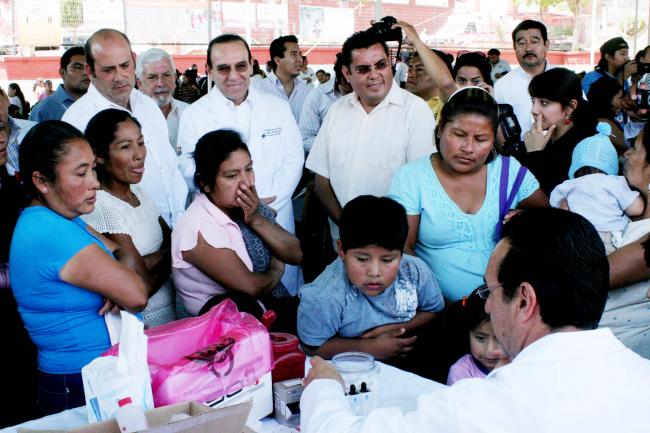 Mexico’s 2018 presidential election was a triumph for Andrés Manuel López Obrador (popularly known as AMLO). By winning an overwhelming majority of the popular vote, López Obrador broke the grip that the Partido Revolucionario Institucional (PRI) and the Partido Acción Nacional (PAN) had held for over 70 years. For the first time, a coalition of leftist political parties resoundingly rejected the longstanding neoliberal political agenda. Following decades of ruinous neoliberal health care policies, the public had very high expectations that a much better health care system was finally on the horizon.

At first it indeed appeared that López Obrador would deliver his promised health care reforms. Mere months after his election victory he proclaimed, “The health sector is a disaster. Education is bad but [even worse] is the health system. That is why I will develop a plan, because people are dying for lack of medical care. The purpose will be to offer medical care and pharmaceuticals free for the entire population.“ But during the first three years of his administration this plan to create a prized health care system like those in Scandinavia has remained simply a “dream.”

Social Medicine Promised but Not Delivered

Throughout his presidential campaign, López Obrador promised to revitalize the broad social justice values codified in Mexico’s 1917 constitution, social solidarity and stakeholder participation key among them. These social justice values remained mere abstractions until 1943 when President Manuel Ávila Camacho approved Mexico’s historic Social Security Law, making the state legally responsible for the “collective wellbeing” of its population. “The law guaranteed the rights to health, medical care, pensions, and aid for dependent children.” A year later the Mexican Social Security Institute (IMSS) was created. IMSS was an integrated system of pensions and health care services with access mandated for all Mexican citizens. With IMSS, Mexico became one of the first nations to establish a universal government-supported health care scheme.

Yet in reality these rights were never universal. While certain powerful groups like military, public officials, and formal sector workers were granted the mandated coverage, Mexico’s immense corpus of informal sector workers and the self-employed, including family businesses, professionals, and poor rural and Indigenous workers failed to receive anything resembling universal care.

This was because despite the guarantees for universal social justice enshrined in the 1917 constitution, there was no political will to achieve them. The PRI and the PAN, Mexico’s legacy parties, monopolized power until the 2018 elections. Both championed strong neoliberal ideologies with little concern for the health or wellbeing of average Mexicans.

An even more dire threat to the Mexican polity emerged toward the end of the 20th century when the nation could not pay interest on the loans it had assumed earlier in the century. Beginning in 1982, a suite of neoliberal economic policies for deeply indebted countries (subsequently known as the Washington Consensus) was imposed. As a condition for new loans, Mexico was forced to make massive cuts in public spending, raise interest rates, increase taxes, and cap wages.

Mexico’s Sistema Nacional de Salud (SNS, National Health System) was restructured twice during this period. The objectives of the first set of “reforms” were decentralization, administrative modernization, and improved coordination. One consequence of these reforms was that the health care budget was sharply curtailed. Additional reforms closely followed the 1994 signing of the NAFTA free trade accord. The effects of these reforms were profound: opening the SNS to market competition diminished the quality of health services, increased inequality, and impeded access to healthy foods. Spikes in maternal and infant mortality and preventable diseases including malnutrition, obesity, and diabetes, were among the tragic consequences.

Efforts to ameliorate some of the devastating effects of Washington Consensus policies on Mexicans’ health began during Vicente Fox’s presidential administration. In 2003, Fox created Seguro Popular de Salud (SPS), a package of basic health services for the uninsured (at the time approximately 53 million Mexicans). The program eventually covered more than 2000 diagnoses, 65 catastrophic conditions, and 100 percent coverage for children under five. Still, over 20 million Mexicans never enrolled. Moreover the SPS failed to improve the public’s general sense of wellbeing or the population’s overall health.

The election of López Obrador in 2000 as mayor of Mexico City was a victory for ordinary citizens and a repudiation of the previous decades of neoliberalism. During his five years in office, López Obrador launched innovative social and cultural programs, including financial support for seniors, single mothers, and the unemployed. By 2002, 98 percent of Mexico City’s residents aged 70 and older were receiving monthly stipends to cover basic food costs; they were also eligible for free comprehensive health care. By 2005, 98 percent of previously uninsured families and individuals had been enrolled in a program for free primary and hospital care.

As president, López Obrador’s intent was to scale up his Mexico City program to provide universal free health care and pharmaceuticals to all Mexicans, regardless of employment status. He would begin with the poorest and most socially disadvantaged, in his words, “First, the poor.” The fundamental difference between López Obrador’s proposal and previous state-sponsored health care schemes that excluded millions and invariably required fees was that his plan would genuinely be universal: enrollment and delivery of services and medicines would be without charge to the insured.

SABI’s implementation was complicated by internal conflicts within the Department of the Secretary of Health and by the emergence of Covid-19. Frontline health teams were quickly overwhelmed by the pandemic’s urgent demands. Due to decades of cuts in public spending, the teams lacked staff, equipment, and training. Long-standing chronic problems also reemerged, including the undependable supplies of essential medicines and equipment, corruption, an insufficient number of medical specialists, bureaucratic inefficiencies, and inexperienced government officials responsible for managing public health care.

The strength of López Obrador’s commitment to the SABI model was seen at the start of his administration when he visited 80 rural hospitals to learn first hand about local needs and experiences. Yet a mere two years after the creation of INSABI López Obrador abandoned it and introduced MAIS (the IMSS-Bienestar Model of Integrated Health Care). MAIS consists of just two components: medical care and community participation and is operated by IMSS through agreements with the states. States governed by the party in power (MORENA) receive priority. This past April 1, Nayarit became the first state to adopt the MAIS model.

The lack of transparency that accompanied MAIS’s implementation has generated doubts about its viability. Another early criticism has been that while MAIS may be a successful model for poor, rural, dispersed, small-scale populations, it is simply inadequate for the more massive health and social problems of cities. Moreover the community health component has already been dismantled. Also problematic are  the chronic imbalance between the demands of community activism and the delivery of medical care, and lack of a clear vision as to how tertiary care will be administered, since tertiary care had even been excluded from the IMSS Bienestar model.

Until now, the historic government of López Obrador has failed to offer a model of health care adequate to meet the public’s expectations, not as a specific proposal or as a structured plan.

Any successful national health care policy must prioritize prevention and deliver universal coverage without fees. Its guiding principles must be that Mexico can never have a healthy population solely through medical interventions, and that the fundamentals of any new system must rest with genuine community participation. For these reasons what is urgently needed is a completely new model to challenge the neoliberal health care hegemony that remains in force in Mexico today.

Carole H. Browner is a Research Professor in the UCLA David Geffen School of Medicine and in the Departments of Anthropology and Gender Studies. Her research interests include gender, inequality, and health, most recently the meanings and uses of genetic information for patients, their families, and clinicians.

Gustavo Leal Fernández is Professor Investigador de Tiempo Completo at the Universidad Autonoma Metropolitana-Xochilmilco. He has been studying health care, pensions, housing, and social security in Mexico and globally since 1978.