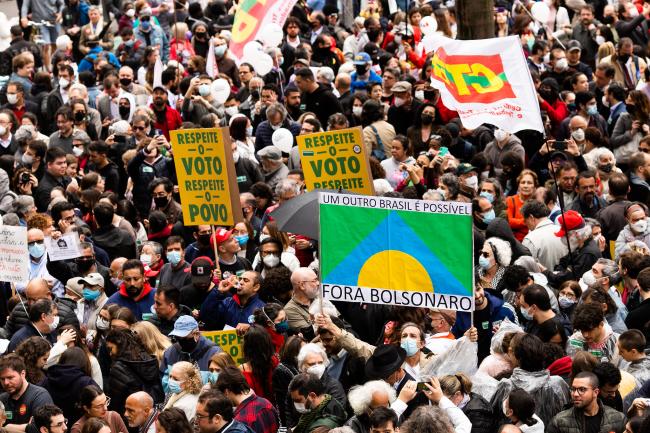 On Sunday, up to 156 million Brazilian voters will go to the polls to choose a new president in a run-off election. The stakes could not be higher. The far-right incumbent is Jair Bolsonaro, whose term (2019-2022) has been marked by endless controversy, accusations of corruption, and the death of more than 600,000 Brazilians in a woefully mismanaged pandemic. He will face the center-left former president Luiz Inácio Lula da Silva, whose eight years in power (2003-2010) witnessed major reductions in poverty and inequality, sustained efforts to expand rights for marginalized groups, and unprecedented prestige for Brazil on the international stage.

Although Lula defeated Bolsonaro by 5.2 percentage points in the October 2 first-round vote, he did not achieve the 50 percent needed to avoid a runoff. The most recent polls show Lula leading by margins of 2-6 points. Yet confidence in the polls has been shaken by their failure to accurately forecast Bolsonaro’s first-round total. Most polls placed him between 35 percent and 38 percent of valid votes, but when the votes were counted, the incumbent had 43.2 percent. For his part, Bolsonaro has used the polls’ first-round inaccuracy to claim that they were rigged against him and to call for a law punishing firms for polls that fail to reflect the final vote.

Bolsonaro has also employed the time-honored Brazilian tactic of using his executive control over federal funds to influence the vote, but on an unprecedented scale. Since August, his government has increased cash payments for poor families in the Auxílio Brasil program, the rebranded version of Lula’s wildly popular Bolsa Família program, and raised the number of Auxílio Brasil beneficiaries by 3 million. Bolsonaro also created special subsidies for truckers and taxi drivers, increased payments to help families buy cooking propane, and moved up a variety of welfare payments to take place in advance of the second round vote. The Lula campaign has filed a complaint with the Supreme Electoral Court (TSE), alleging that pro-Bolsonaro businesses have attempted to coerce their employees into voting for the incumbent.

On top of all this, Bolsonaro has continuously made unsubstantiated claims that Brazil’s globally-respected electronic voting system—in place since the 1990s—is susceptible to fraud. These allegations are being spread internationally by Trump allies such as Steven Bannon, and claims are now circulating in far-right circles that the U.S. companies they have accused of rigging the 2020 election for Joe Biden are now being used in Brazil to steal the election from Bolsonaro.

Despite the ludicrousness of these claims, Bolsonaro has an advantage that Donald Trump lacked in his attempts to overturn the 2020 U.S. election: a long tradition of military intervention in politics. As recently as 2018, the military pressured the Supreme Court to send Lula to prison for his politically-motivated conviction on false corruption charges. Could this mean that Bolsonaro has a better chance of succeeding at overturning the election than Trump did?

In fact, despite these attempts to buy votes and sow doubts about the trustworthiness of Brazil’s democratic institutions, there is still cause for optimism going into Sunday. Both the third- and fourth-place finishers, Mato Grosso do Sul senator, Simone Tebet, and former Ceará governor and Lula cabinet member, Ciro Gomes, have endorsed Lula. Tebet has actively campaigned for Lula, while Gomes, after a tepid initial endorsement, has been silent, just as he was in the 2018 runoff. Nonetheless, polls indicate that most of their supporters will back Lula.

While uncertainty about the polls’ accuracy continues, the firm that came closest to predicting the first-round result, predicting 50.3 percent for Lula and 41.1 percent for Bolsonaro, currently shows Lula with a 53 percent to 47 percent lead. Other polls show Lula with as much as an 8-point lead. After the first debate on October 16, focus groups and pundits generally agreed that Lula outperformed his rival. The former president will have a final chance to increase his lead in Friday’s final presidential debate.

Lula’s lead has widened slightly in the wake of an October 14 podcast interview in which Bolsonaro appeared to speak favorably of statutory rape. The president claimed that he “felt a spark” during an encounter with a group of 14- and 15-year-old Venezuelan girls who he took for sex workers, as he rode his motorcycle on the outskirts of Brasília. The opposition quickly jumped on his statement to accuse him of pedophilia. Bolsonaro has also had to explain his friendship with former federal congressman Roberto Jefferson, who is facing attempted murder charges after opening fire on federal police officers last Sunday. The officers were attempting to arrest Jefferson for breaking the terms of a home confinement, after being arrested in 2021 for spreading political disinformation via social media.

On balance, then, the indications point toward Lula winning the runoff on October 30. Should Bolsonaro lose, there is little doubt that he will follow the lead of his friend and hero, Trump, and declare—again, without evidence—that the results were fraudulent. However, fears of a military coup to overturn the election are, if not entirely unfounded, certainly overblown. There appears to be little appetite among military leadership for another blatant intervention in civilian political institutions. The military’s ignominious withdrawal from power amidst mass protests and economic collapse at the close of the 1964-1985 dictatorship persists in the national memory, and it is unlikely the military would decide en masse to support another such intervention. Moreover, historically military interventions have nearly always taken place at the behest of a decisive majority of the country’s civilian political class. As my forthcoming book argues, the trauma of military tutelage during the last dictatorship has created great reticence among Brazil’s political elite toward any prospective attempt by the military to return to power.

If the polls are indeed within striking distance of the final results, and if Bolsonaro does founder in his probable attempt to overturn the election, it is likely that on January 1, 2023, Lula will be sworn into office for a third term as president. And the Left in the Global North will watch with hope that he can indeed fazer o Brasil feliz de novo—make Brazil happy again.

Bryan Pitts is a historian of 20th century Brazil and author of Until the Storm Passes: Politicians, Democracy, and the Demise of Brazil’s Military Dictatorship, which will be published by University of California Press in January 2023. He is assistant director of the Latin American Institute at the University of California, Los Angeles.