Argentina: Beyond the ‘High Dollar’

Argentina has experienced record economic growth, and the devalued peso, or the “high dollar,” as it is known, is at least partially responsible. But while this financial strategy is widely accepted in Argentina across the political spectrum, it has been profoundly limited.

This article was published in the September/October 2011 issue of NACLA Report on the Americas, "The Politics of Human Rights."

In 1992, Argentine president Carlos Menem launched the convertible peso, fixing the national currency at a one-to-one value with the U.S. dollar. This artificially over-valued peso gave Argentines strong purchasing power on the global market, but it hurt the country’s exporters, who found it difficult to compete internationally. When the country slid into an economic crisis in 2001, the fixed exchange rate was abandoned. Since then, Argentina has experienced record economic growth, and the devalued peso, or the “high dollar,” as it is known, is at least partially responsible. But that is only part of the story.

Argentina is holding presidential and legislative elections on October 23, but regardless of the victor, the high dollar will likely stay, at least in the short term. Current policy in this area is so widely accepted in Argentina that even political sectors in opposition to President Cristina Fernández’s leftist Front for Victory aren’t willing to rock the fiscal boat. The following article was originally published in the September 2011 issue of El Diplo, the Southern Cone edition of Le Monde diplomatique. Reproduced with permission. 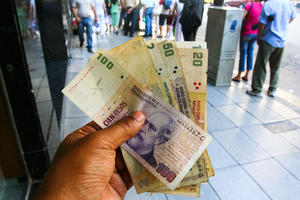 Argentine Pesos (Credit: Boston Globe)Since Argentina abandoned the convertible peso in 2001, a new pattern of economic growth has emerged, one driven by the manufacturing sector. The dominant discourse suggests that having a “high” or “competitive” dollar in place is a necessary condition—and for many, a sufficient one on its own—for bringing about a radical change in the regime of accumulation, a change led by an expanding industrial sector thanks to a notable jump in exports, new kinds of foreign sales, a virtuous process of import substitution, and a revitalization of domestic production.

The high dollar has become the cornerstone of Argentine industrial policy in the context of an international situation that, with few exceptions, has been generally very favorable for exporting countries like Argentina.1 As reflected in the discourse of the government and its allied sectors, the premise of this policy is that it will lay the groundwork for a model of economic growth with “social inclusion.” With differences and nuances, the opposition candidates have not focused on industrial policy or its associated shortcomings, in their speeches and proposals. It is therefore one of the most notable silences of the current public debate. For this reason, we ought to analyze the extent to which the policy of the high dollar has benefited the activities related to industrial production, as well as its implications and, above all, its limitations.

After many years of deindustrialization (1976–2001), the share of the industrial sector in the overall Argentine economy grew in the era after the convertible peso was abandoned. This increase, however, existed only until 2003 and, to a large extent, was linked to the use of productive capacities that already existed but had been idle because of the crisis. From 2003 onward, the industrial sector’s share of GDP once again decreased. This is associated with the relatively low investment compared to the high profits of the big companies, in particular between 2004 and 2007, when the major business’ return on sales were between 14% and 19% (levels comfortably above those during the years of the convertible peso).2

In this limited reindustrialization, the productive behavior of the various branches of manufacturing shows two distinct stages. First, there was widespread growth until 2007, which was important for those manufacturers that had been hard hit since the beginning of the process of deindustrialization in 1976. These are industries like machinery and equipment manufactures, metalworking, textiles and clothing, footwear, leather goods, and so on, which are usually made up of small- and medium-size enterprises and which need a large workforce. Yet there were no structural changes in Argentina’s profile of industrial goods, inherited from the years of neoliberal hegemony, because the dominant branches of the economy were expanded—food, chemicals, steel and aluminum, petroleum derivatives, and autos.

Then, the second stage: beginning in 2007, with the international financial crisis, Argentina’s extraordinary competitiveness on the world market began to erode, and manufacturing growth began to slow down. (A few sectors stand out for their continuing dynamism in this context: chemical products, food and beverages, leather, basic metals, rubber and plastic, car plants, and electronics assembly plants in Tierra del Fuego.3) Moreover, there was a slowdown in sectors like non-metallic minerals, the manufacture of precision instruments, textile and clothing products, paper and paper derivatives, products made from metal, and printing and publishing. Finally, there was a drop in the volume produced by sectors that in the previous stage of non-convertability had been expanding, in some cases considerably: capital goods, wood products, furniture and mattresses, transportation equipment, and refining industries.

In short, in the first stage, until 2007, every branch of production experienced growth, but there were no significant changes in the structural characteristics of the industrial sector. In the second stage, there were mixed performances, resulting in an industrial structure geared toward the processing of natural resources and automotive assembly. In 2010, about two thirds of Argentina’s industrial production consisted of food, chemicals, steel, aluminum, petroleum, and auto industries.

In general, these are industries that have weak internal linkages (in production and labor), occupy a passive and subordinate position in the global market, pay wages that are far more significant as a business cost than as a means of boosting demand, and are characterized by highly concentrated markets (mostly because of foreign capital).4

The high rates of growth and the manufacturing sector’s composition, along with the cheaper cost of labor relative to that of capital that fueled the devaluation, have made an extraordinary recuperation of employment levels possible, breaking with the downward trend of the 1990s (with its beginnings in 1976). Since 2007, however, the loss of strength in the weakest, generally labor-intensive branches of manufacturing, and the structural advance of the most capital-intensive areas, has provoked a stagnation in the job-creating capacity of the sector, generating high rates of unemployment.

The industrial growth during the era of post-convertability was associated with a considerable expansion in exports. Encouraged by the high dollar, low wages in international terms, and the existence of expanding foreign markets, exports nearly tripled between 2001 and 2010. However, given the weakness of the policies aimed at changing the patterns of participation in the global market, an export profile based upon the exploitation of natural resources and automobile assembly was strengthened. This profile was also characterized by a very high degree of concentration. Accordingly, in 2010 the food, automobile, chemical, basic metals, and petroleum-refining sectors made up 86% of manufacturing exports, compared to an average of “just” 78% during convertibility. It must be noted that fewer than 100 large corporations, mostly foreign owned, account for about 80% of foreign manufacturing sales.

Due to the difficulties of import substitution, stemming from the almost total absence of specific industrial policies, the state was unable to mitigate the manufacturing sector’s disintegration and the growing technological dependency. Hence the phenomenal increase in imports of manufactured goods, in many cases substituting domestic production, which was only protected because of the exchange rate and some temporary measures.5 This eroded the trade surplus to the point of converting it into a deficit in 2007, 2008, and 2010 (in 2009 there was a trade surplus due to the fall in foreign purchases in the midst of the global crisis).

In this context, in the period of post-convertibility, the “structural duality” of Argentine industry was affirmed, a result of the deindustrializing policies of 1976–2001. A handful of industries linked to the processing of basic resources have a positive trade balance, while the rest are generally in deficit. With few exceptions, this is accentuated as we move toward more complex industries, with more intensive use of scientific-technological knowledge, requiring a more highly qualified workforce, with greater potential to spur other industries with their own growth. It is not a coincidence, in this sense, that capital goods are the area with the greatest deficit.

This relates to an issue no less important in economic and political terms. In an industry characterized by this “structural duality” in terms of international insertion, the few sectors and actors that generate foreign exchange assume a central role in the performance of the manufacturing sector (and in the economy as a whole). Therefore, they hold a decisive veto power over the orientation of public policy. This is basically a handful of large companies, foreign and domestic, highly transnational, from the mining, oil, and agricultural sectors and manufacturers of certain industrial commodities. The paradox is the following: A process in which industry is touted as the backbone for a “model of economic growth and social inclusion,” but it consolidates the veto power of actors whose growth depends upon activities with low or no degree of industrialization.

An analysis of the trajectory of the Argentine industry during post-convertibility cannot overlook its significant growth and impact on job creation. But neither can it ignore that this process was limited: It did not spur structural change in the manufacturing profile, and it did not substantially improve the competitiveness of the weakest manufacturing sectors. Neither did it change the picture of “structural duality” of foreign trade and its political counterpart.

These shadows show the limitations of a strategy to promote industry largely based on the high dollar and pose a series of questions about whether the present industry can really serve as the cornerstone of an economic model of “growth with social inclusion.”

It is necessary, then, to proceed with creating a plan for industrial development that supports an expansion of manufacturing associated with a new specialization and international insertion, beginning with sectors whose competitiveness does not depend exclusively on international exchange rates and low global wages. This would require progress in shaping a framework of alliances with those sectors consolidated during reindustrialization and the redistribution of profits.

This implies, in turn, taking on the difficulties of confronting powerful actors from economic and political-ideological camps. These difficulties are important, but they are no more serious or risky that those that come with not confronting the problem, or opting for a strategy of conciliation with the interests that would deepen the domestic under-development begun in 1976.

Martín Schorr is a researcher with Argentina’s National Scientific and Technical Research Council (Conicet). Translation from the Spanish by Amelia Frank-vitale.

1. In recent years, some industry-specific measures have been implemented. Generally they have done so with little coordination and evident bias in their application. See Daniel Azpiazu and Martín Schorr, Hecho en Argentina. Industria y economía, 1976–2007 (Buenos Aires: Siglo XXI Editores, 2010).

3. In the last two cases this was thanks to two separate special promotional schemes.

5. The implementation of quantitative restrictions on imports (non-automatic licenses) that involve diverse industrial products can only be considered as a temporary measure that does not obviate the need to put forth active policies.