The Global Revolt and Latin America

Along with the Arab Spring, the indignados movement of Spain, and Occupy Wall Street, Latin America also played a role in the global tumult in 2011. Over the last year diverse grassroots movements in Bolivia, Chile, Mexico, and Peru have been raising  questions and challenging the existent order.

Two thousand and eleven was a year of global protest and revolt. The Arab Spring, the indignados movement of Spain and southern Europe, and the Occupy Wall Street movement in the United States captured the world’s attention. Latin America also played a role in this global tumult: with the student upheaval in Chile, the Gandhian-like citizens’ campaign against state and narco terrorism in Mexico, the indigenous led uprising in the mining regions of Peru, and the grassroots agitation in the Bolivian social movements that brought Evo Morales to power. These movements are highly diverse in their social and political composition, and they are anti-systemic, raising fundamental questions and challenging the existent order. 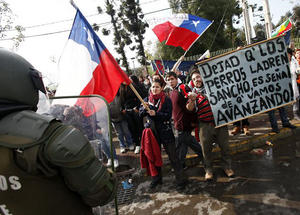 Chilean protests in August 2011 (credit: latindispatch.com)At the tip of the South American continent, Chilean youth rocked the country with massive demonstrations starting in May. The largest social mobilization since the fall of the Pinochet regime in 1990, the student movement is demanding “free and quality education” for everyone. Under the dictatorship much of education was privatized and today 70% of university students attend private institutions.

The students are part of a broader movement that is calling for the transformation of Chile. During the past year, copper mine workers have gone on strike, massive mobilizations have taken place to stop the construction of a huge complex of dam and energy projects in the Patagonia region of southern Chile, gay rights and feminist activists have marched in the streets, and the Mapuche indigenous peoples have continued to demand the restoration of their ancestral lands. Faced with the intransigence of the conservative government of billionaire president Sebastián Piñera, the movement is calling for a national plebiscite.

“If the government is not capable of responding to us, we will have to demand another non-institutional solution: the convocation of a plebiscite so that the citizens can decide on the educational future of the country,” asserts Camila Vallejo, part of the leadership of the Student Federation of the University of Chile and also a member of the Communist party.

Forty-two social organizations grouped together under the banner “Democracy for Chile” have rallied to back the student movement. Their manifesto proclaims: “The economic, social and political system is in a profound crisis that has compelled the communities to mobilize . . . An unprecedented and historic movement of citizens is questioning the bases of the economic and political order that were imposed in 1980” by the Pinochet constitution. The coalition supports the students’ call for a referendum, and argues that it should be “multi-thematic” and allow voters to decide whether to convene a constituent assembly that would have the power to draft a new constitution.

At the other end of Latin America a very different movement has emerged in Mexico to confront the violence of the drug cartels and the state. The drug war, launched by Mexican president Felipe Calderon shortly after he took office in 2006, has lead to an ever increasing spiral of violence that has taken the lives of upwards of 50,000 people. The United States, under Presidents Bush and Obama, has fully backed Calderon's war and is sending hundreds of Drug Enforcement Agency agents deep into Mexico, some of which engage in direct combat.

Javier Sicilia—a renown poet and essayist whose son was a victim of the drug war—launched the Movement for Peace With Justice and Dignity with an open letter to Mexican politicians in May titled, “Estamos Hasta la Madre,” Mexican slang roughly translated as “We've had it up to Here.” The movement’s caravans have traveled across the country, drawing tens of thousands. Adhering strictly to non-violence, their objective is to galvanize the national consciousness with an awareness of the deaths and disappearances of both the innocent victims and the criminals. Movement supporters believe their struggle is rooted in the recent history of Mexican mobilizations, including the 1968 student uprising and the 1994 Zapatista rebellion in southern Mexico. Like these earlier movements, the Movement for Peace With Justice and Dignity is focusing attention on the poverty and economic despair that breeds violence in the cities and the countryside.

Time Magazine listed Sicilia as one of the global protestors that it declared “Person of the Year” in 2011. While acknowledging the transcendent importance of the Arab Spring and the indignados movement in an interview, Sicilia sees the Mexican peace and justice movement as having its own particular dynamic: “The movement's success surprised me quite a bit. My intention at the beginning was just to signal the horror of the crimes committed as well as the government’s faulty reaction to it.” He concludes by saying that the broader concepts of “a community, a nation,” have helped reclaim “a public space for us and not the criminals.”

Under its broad umbrella, the peace and justice movement has also spawned two major occupations in Mexico City, one in front of the Mexico City Stock Exchange. People in these camps see themselves as part of the indignados and the Occupy Wall Street movements and practice horizontal decision-making at general assemblies.

Receiving scant attention are the protests against the extractivist model of economic development in Latin America. This model undergrids the center-left governments as well as the more traditional regimes of Latin America. Oil and gas, minerals, and agricultural commodities comprise the bulk of the region's exports, and even Brazil, the predominant manufacturing country of South America, receives over half of its export revenue from raw materials and agricultural commodities. While the region has weathered the more severe effects of the current global Great Recession, the growing extraction of these trade goods has often led to community and environmental protests over the abuse of lands and water resources that destroy the livelihood and even sometimes the very lives of the local populace.

As 2011 drew to a close the state of Cajamarca in northern Peru was shaken by demonstrations against the U.S.-based Newport Mining Corporation, which plans to make a $4.8 billion investment in a new gold mining operation. The company had first come to the state in 1993 to open up the nearby Yanacocha gold mine, the largest in Latin America, covering 535 square miles. Its operations there have contaminated the local water resources and lagoons. A large spill of mercury along a 45-kilometer stretch led to the contamination of over 1000 local residents with a number of infant deaths and deformities attributed to the spill.

Just before his inauguration in July, the left-of-center president Ollanta Humala proclaimed his opposition to the new mining project, saying, “the lagoons of Cajamarca are not for sale, because you can't drink gold, and you don't eat gold.”

Yet a few months later he was giving the green light to Newport’s new mining project, leading to large-scale protests by the residents of the nearby communities and a strike by the mine workers. Confrontations occurred between the police and militant demonstrators leaving dozens injured. Humala then proclaimed a 90-day state of emergency in parts of Cajamarca. His prime minister Salomon Lerner resigned, Newport suspended its operations and when the demonstrators agreed to talks, Humala lifted the state of emergency. For the moment, the communities of Cajamarca had won a victory.

Humala also faces unrest in the southern state of Puno. Last March 25,000 demonstrators mobilized against the Big Bear Mining Corporation of Canada over its plans to develop a silver mine. Highland indigenous communities near the town of Huacullani insisted that they had not been consulted about the project and that the mine would ruin their lands and their subsistence livelihoods based on farming quinoa and potatoes and rearing alpacas. They proclaimed “¡Agro sí, mina no!” (Agriculture yes, mining no!) Humala has temporarily suspended the mining project but he has given no indication of what he will do next.

In much of Latin America a transformative and radical dialogue is taking place at the grassroots that questions the very process of development. The increasing clashes between the social movements and many of the new left governments is over how best to improve the lot of the indigenous communities and the rural poor. In Bolivia the dispute over linking the country into a transoceanic transportation corridor by tearing up the heart of the lowland Isiboro-Sécure Indigenous Territory and National Park (TIPNIS) has raised fundamental questions about development and who benefits. When roughly 1000 marchers set off on the 360-mile trek from the park to La Paz on August 15, Morales called them “tourists” beholden to foreign interests. They were in fact marching to stop the destructive capitalist development of their homelands and calling for an alternative based on collective aspirations and respect for the natural world and the human beings who share it.

In Ecuador, many of the social movements are denouncing President Rafael Correa for following traditional extractive policies to exploit the country's petroleum and mineral resources. CONAIE, the major indigenous organization in Ecuador is openly challenging Correa's developmentalist policies in mining, water rights, and the exploitation of oil reserves in one of the most bio-diverse areas in the world. About 180 people are charged with terrorism and sabotage after participating in demonstrations against the government's water and mining laws.

This marks a new phase in the advance of the social movements that were central in the rise of a string of Latin American left-of-center governments from Venezuela and El Salvador to Argentina and Paraguay. In the particular cases of Ecuador and Bolivia the social movements participated in the drafting of new constitutions that “refounded” their nations around participatory and community values. Both constitutions call for the people to live in concord with “Pachamama” (Mother Earth), and for Abya Yala, Buen Vivir or Good Living. This is a holistic cosmovison of the world in which people strive for harmony.

As the governments are found reverting to policies that reflect the interests of the old order, the indigenous and social movements have once again mobilized to demand more profound changes in their economies and societies. If there is a common theme that is driving the global upheaval—be it in the Middle East, Europe, the United States, or Latin America—it is the search for new values and participatory ways of living that will replace the old systems of domination and exploitation that are destroying our world.

Roger Burbach is the director of the Center for the Study of the Americas (CENSA) based in Berkeley, California. He is working on a new book with Michael Fox and Fred Fuentes for Zed Books, “The End of US Hegemony and Socialism (As We Know It): Social Movements and Left Leaders in Bolivia, Brazil, Ecuador and Venezuela.” See also the latest November/December 2011 NACLA Report on the Americas, "Latino Student Movements: Defending Education."