Why Build a Border Wall?

We live a world of borders and walls. Invariably, the barriers are justified in the language of security—the country must be protected from the terrorists, drug cartels, insurgents, or suicide bombers lurking on the other side. Despite the external focus of these justifications, in most instances these walls and fences are actually the result of the internal politics of the state that builds them.

We live a world of borders and walls. In addition to the massive and expensive barrier on long stretches of the U.S.-Mexico border, in the 23 years since the fall of the Berlin Wall, 26 other new walls and fences have gone up on political borders around the world. These walls are built by both totalitarian regimes and democracies, including India, Thailand, Israel, South Africa, and the European Union. Invariably, the barriers are justified in the language of security—the country must be protected from the terrorists, drug cartels, insurgents, or suicide bombers lurking on the other side. 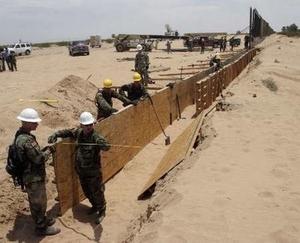 Despite the external focus of these justifications, in most instances these walls and fences are actually the result of the internal politics of the state that builds them. There are three specific reasons for constructing a border wall: establishing sovereignty over ungoverned or unruly lands; protecting the wealth of the state and population; and protecting cultural practices within the state from the possible influence of other value systems possessed by immigrants. The decision to build the 664-mile barrier along the U.S.-Mexico border, although often presented as primarily in response to drug-related violence and terrorism, is largely due to these internal factors.

The desire to establish clear sovereign authority over the state’s territory is the first factor that underlies the construction of a border barrier. Although we often imagine the territorial outline of countries as sharply drawn lines where the control of one state ends and another begins, most borders on the ground belie this simplicity. The idea that borders (or rivers or coastlines) are lines is a convenience of cartography that is established on the ground many years after a map is drawn, if at all. The oldest political borders in Europe, for example, are only a few hundred years old, and most were established more recently than that. Before the 1600s, most states did not recognize each other’s sovereign authority over a territory, and the technological advances in cartography that allowed fixed borders and territories to be represented had not been achieved. Consequently, even the simple idea that states have clearly defined territories that are marked by a linear border is a very recent development.

The contemporary U.S.-Mexico border was established on maps at the end of the U.S.-Mexican War by the Treaty of Guadalupe Hidalgo.1 The war settled which territories the expansion-minded United States could claim and transferred almost half of Mexico’s territory to the United- States. The last sections of the border were finalized with the Gadsden Purchase in 1854, which secured mining rights and a better route for a railroad connection to California. At the time, the territory was part of the United States in name only and, despite the enormous land area, was populated by about 100,000 Mexicans and 200,000 Native Americans.2 Over the intervening years, sovereign authority over these lands was established by moving Anglo populations onto the land and by violently suppressing any resistance. Land surveying, creating property maps, and the deployment of police forces resignified the landscape. Yet the line existed on the map and in the population’s geographic imagination only inchoately, as the practices and performances of sovereignty slowly inscribed the different territories onto the landscape.

This process accelerated in the 1990s as funding for border security increased substantially and the idea of marking the imagined line with a physical barrier took hold. When the Border Patrol was established in 1924, it was tiny and remained underfunded for decades. In 1992, there were 3,555 agents at the U.S.-Mexico border, but by 2010 there were over 20,100.3 These changes have both practical and symbolic effects on the hardening of the border. The additional agents play a practical enforcement role while the fence project, which passed Congress in 2006, is much more symbolically significant. Walls and fences are the most efficient way to mark territorial differences on the ground because they take the abstract idea of a territory and materialize it. The construction of the barrier is another step in the process of reimaging these formerly Native American and Mexican lands as firmly part of the territory of the United States. By physically inscribing the line in the landscape, the wall brings the border into being and visually demonstrates where U.S. territory ends and Mexican territory begins.

The second internal factor that results in the construction of a wall or fence on a border is the presence of a poorer country on the other side. In previous eras, political borders served primarily as either military defensive lines where one army prevented the movement of another or as markers of different government regimes where one set of laws and taxes or one cultural system stopped and another began. Over the 20th century, the practice of absolute sovereignty over a bounded territory produced substantial wealth inequalities globally, which increased the desire of many people to move either to avoid deteriorating conditions in their home state or to seek better economic opportunities elsewhere.4 These movements, along with the possibility of hostile people or items passing into the state, resulted in a much more substantial focus on borders as a location to prevent the unauthorized movement of people.

Just as we often imagine most borders as the sharp lines depicted on maps, we also imagine that historically most borders were fenced and fortified, but this is not the case. The older purposes of borders as defensive military lines or administrative divisions do not necessitate a wall or fence. Fences do not deter tanks and airplanes, and administrative divisions between peaceful neighbors do not require an expensive barrier. The changing purpose for borders is evident in the sheer number of new barriers built in the past 20 years. Twenty-seven have been built since 1998, compared with 11 during the entire Cold War period from 1945 until 1990. Furthermore, several of those Cold War barriers were quite short including the U.S. fence with Cuba at Guantánamo Bay and the fence between Gibraltar and Spain.

Not only are the new barriers longer than in the past, but many are built along peaceful borders. The significant characteristic that most of these borders share is that they mark a sharp wealth discontinuity.5 For example, the average annual per capita GDP (in 2010 U.S. dollars) of the countries that have built barriers since the fall of the Berlin Wall is $14,067; the average for the countries on the other side of these barriers is $2,801. The U.S. barrier on the Mexican border fits this pattern. Although the Canadian border is longer and certainly more porous (the Border Patrol estimated in 2009 that it had effective control over less than 1% of the Canadian border versus 35% of the Mexican border), the debates about fencing the border focused only on Mexico.6 The United States’ per capita GDP in 2010 was $47,000, Canada’s was $39,000, and Mexico’s was $14,000.

The final internal factor that plays a role in the decision to build a fence or wall on a political border is the fear that population movements will irreversibly change the way of life inside the state. In the United States, concerns about the threat that immigrant values pose are as old as the country itself. At different points in history, the Irish, the Chinese, and the Italians were all described as posing a grave threat to a particular version of what it meant to be an “American.” Today, these debates revolve around both Muslims and Latino immigrants who, anti-immigrant activists argue, bring alternative social codes and do not assimilate into the mainstream of U.S. society. The fence on the border symbolizes the hardened and fixed borderline that marks a clear distinction between the territories where particular people belong.

The construction of a barrier on the border simultaneously legitimates and intensifies the internal exclusionary practices of the sovereign state. It legitimates exclusion by providing a material manifestation of the abstract idea of sovereignty, which brings the claim of territorial difference into being. The barrier also intensifies these exclusionary practices, because once the boundary is marked and “the container” of the state takes form, the perception of the difference between the two places becomes stronger. This process is evident in new restrictive immigration laws at the state level in Alabama and Arizona as well as in the protests and vandalism directed toward proposed Islamic cultural centers in New York and Tennessee. By demonstrating sovereign control, the state simultaneously reifies authority over that territory and defines the limits of the people that belong there. These perceived differences then fuel more passionate feelings of belonging to the in-group and distinction from the other on the outside.

The U.S. fence on the Mexican border should be understood both in terms of the enhanced enforcement capabilities of the government and in the assertion of where the state has authority and who should be allowed in the state’s territory. The United States built the barrier on the U.S.-Mexico border to define its sovereign authority over its territory, to protect the economic privileges of its population, and to protect a particular way of life from other people who are perceived to have different value systems. Rather than a barrier against terrorism and cartel violence, it is a performance of the United States’ territory and boundaries.

Reece Jones is Associate Professor and Chair of Graduate Studies in the Department of Geography at the University of Hawai‘i at Manoa. Parts of this article are excerpted from his new book, Border Walls: Security and the War on Terror in the United States, India, and Israel (Zed Books, 2012).

2. Joseph Nevins, Operation Gatekeeper and Beyond: The War on “Illegals” and the Remaking of the US-Mexico Boundary (Routledge, 2010), 26–8; Kelly Lytle Hernández, Migra! A History of the US Border Patrol (University of California Press, 2010), 21–2.

5. Stéphane Rosière and Reece Jones, “Teichopolitics: Reconsidering Globalization Through the Role of Walls and Fences,” Geopolitics 17, no. 1 (2012): 217–34.