Ecuador Elects a President, No News There

Incumbent Rafael Correa is the clear frontrunner in Ecuador. So journalists are finding new ways to cover the country's upcoming presidential election.

On Sunday, February 17th, Ecuadorians will take to the polls to elect their leader. Unlike 2012 presidential contests in the United States, Mexico, and Venezuela, where international media closely followed the campaigns, in Ecuador this election season has garnered little press fanfare. That's because there's not much question about the results: incumbent Rafael Correa of the Alianza Pais holds a 20-point lead over his seven opponents, according to recent polls. So confident is the president of his prospects on Sunday that he's refocused his efforts on wining a party majority in the National Assembly. 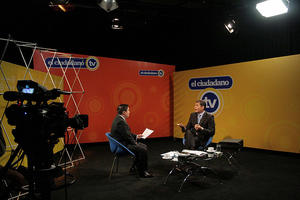 Presidential races with a clear frontrunner don't make for the most exciting news (remember much about the leadup to Cristina Fernandez's 2007 victory, in which she succeeded her husband in leading Argentina? Me neither, and I was just across the river in Uruguay.)

However, journalists in Latin America and across the world are finding ways to make this campaign interesting. Most of them focus on concerns about the "strong man" tactics that have often defined the public image of Correa, who has antagonized the Ecuadorian press, suing journalists and newspapers, as well as relished publicly denouncing the U.S., and nationalizing private enterprises. (To my thinking, the finest example of Correa's "strong man" side came in in 2010, when the president responded to an attempted coup/police uprising by literally loosening his tie, pumping his fist, and declaring, "If you want to kill the president, I'm right here!" Not that anyone can blame a man for feeling his oats right then: in the decade before Correa took office, unstable Ecuador elected and ousted a full seven presidents.)

One example of such a critique comes from Spain (where, goodness knows, people do have more immediate issues to be concerned about than a runaway victory by Correa). National daily El Pais writesthat "the only doubt is whether he'll get elected in the first or second round." The story continues by dubbing the presdient's decision-making over the last five years "correazos" (a word play with Correa's last name, translating roughly to "lashings"), calling him "abrupt, intolerant, precipitous," though the author concedes that Correa is "without doubt motivated by the best intentions."

William Neuman of the New York Times recently filed an offbeat story about Correa supporters who are planning to vote against the President simply because of his "arrogance." The president recently engaged in a Twitter war with an opponent, telling businessman and political aspirant Alvaro Noboa to "pay your taxes and inaugurate your brain before 'talking' with me. You're an insult to the country!" The story dubs Mr. Correa's governing style "irrascible" but allows that "he has goverened during a period of relative prosperity....[and] put money into social programs."

Clarin, the leading daily in Argentina, has focused largely on the implications of a second Correa term for the press. In a series of articles published in recent weeks, the newspaper has written that independent journalists in Ecuador see themselves as "targets of a new offensive." It warns that if Correa wins a parliamentary majority, he is likely to approve a proposed law that will limit when, how, and by what means information can be circulated. Grupo Clarin, Argentina's largest media conglomerate, has itself been under attack by the Fernandez administration in recent years.

Clarin has also expressed concern about economic situation of Ecuador going forward (are we starting to see a pattern here? Do Argentine journalists perhaps see in Ecuador a surrogate for their own woes?). In her February 13 column, journalist Carolina Brunstein expressed doubt about the president's ability to keep his campaign promises to keep Ecuador growing at pace. The country's economy has done well since its controversial dollarization just over a decade ago: in 2009 Ecuador was able to buy back 91% of the World Bank loans it defaulted on the year prior, and GDP increased 7.8% in 2011. In 2012, however, it dropped to 4%, raising concern that dollarization has made exports too expensive, leading to increased imports and a hefty deficit with China. "This model can't be sustained for much time," the column quotes one economist's concerns. Correa's economic achievements were a large part of his campaign, as he cited significant drops in poverty and low inflation (currently at 4 percent). "Although for a large portion of citizens, Correa's government has meant a redistribution of income," wrote Brunstein, "the economic model, essentially based in oil and mining, creates doubts about the future."

The takeaway from media coverage of the Ecuadorian elections? Don't bother watching the exit polls on Sunday; do pay attention to Ecuador over the next six years.

UPDATE: It appears that Rafael Correa has won reelection in Ecuador with 61% of the vote, with 30% of results in as of 7 pm.