Puerto Rico, Now! On the Road to Self-Determination

The general elections of November 6 in Puerto Rico presented a great challenge to the national liberation movement. Through the work of the political action committee ¡Boricua ahora Es! (Puerto Rico, Now!), we succeeded in uniting nearly all the political tendencies of the country with the goal of ending our colonial-territorial status with the United States.

The general elections of November 6 in Puerto Rico presented a great challenge to the national liberation movement. Through the work of the political action committee ¡Boricua ahora Es! (Puerto Rico, Now!), we succeeded in uniting nearly all the political tendencies of the country with the goal of ending our colonial-territorial status with the United States. By bringing together defenders of annexation, sovereignty and independence to end our colonial status, Puerto Rico, Now! is continuing the work of the League of Patriots of Eugenio María de Hostos, who proposed the holding of a plebiscite in 1898 to rid the country of the military government that had been imposed on it.

The French historian Ernest Renan once proposed that a nation is created in a daily plebiscite. This is to say that in-so-far as the members of a society voluntarily speak their own language and maintain their own customs and traditions, they are voting in favor of a nation every day with their actions. But in the case of nations that are colonized by other nations, this daily plebiscite takes on greater importance because colonized people don’t have the sovereignty required to produce the goods and services needed by their communities. This is the case of Puerto Rico, a nation without a state since the U.S. invasion of 1898.

Because we are a nation without a state, we face severe problems of economic and social insecurity that are linked to our territorial-colonial relationship with the United States. In 2011, there were 1,026 homicides, making our island one of the most violent territories the world. Almost 15% of the workforce is unemployed and only four of 10 Puerto Ricans participate in the formal labor market. During the decade 2000-10, about 500,000 Puerto Ricans migrated to the United States, where, according to the 2010 U.S. census, 4.3 million now live. For the first time in our history, more Puerto Ricans live in the metropolis than in our own national territory.

The economic crisis that affects us with its high levels of unemployment, the indiscriminate violence of drug trafficking, and poor educational and health services has its origins in the lack of sovereign power. The Commonwealth of Puerto Rico, which, between 1952 and 1982 succeeded in taking care of some of its social and economic problems, has been left without resources to develop beyond its colonial reality. We need to reclaim our sovereignty in order to produce the goods and services that we need to continue our everyday voting for our own nation.

In his introduction to Franz Fanon’s Wretched of the Earth, Jean-Paul Sartre tells us about the force of the colonized human being: “This contained fury, if it doesn’t explode, turns in upon itself and damages the oppressed themselves. To liberate themselves from that fury, they end up killing one another.” Is this why we Puerto Ricans see ourselves surrounded by violence everywhere we turn—shopping malls, schools, streets, neighborhoods, public housing? This colonized fury, instead of confronting the status quo, spreads out indiscriminately. The policies of an “iron fist against crime” and “certain punishment” simply criminalize the poor and disperse poverty. 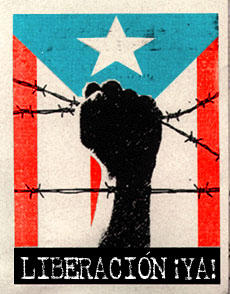 In the midst of this crisis, Puerto Rico, Now! Has emerged as a social movement at the margins of the traditional parties to orient, mobilize, and vote for a status that is not territorial and colonial, but one that permits us to confront the United States with a demand for freedom for all Puerto Ricans. The national result on November 6 was an emphatic no for colonial status with 943,094 votes (54%) and 803,407 votes (46%) for maintaining our colonial relation with the United States.

The Puerto Rico, Now! plebiscite succeeded in defending liberty by voting no against remaining a colonial territory. This convincing victory of the movement for national liberation allows us to elaborate with our own people the most appropriate method of decolonization. In this process, we can begin to look for solutions to the economic and social problems of Puerto Rico.

The sociologist Max Weber understood that all societies, at some moment of their history, become nations and establish a state with which to govern themselves. Colonized societies can have a government but not a national state. Colonies with more or less autonomy lack sovereign power to meet the needs of their citizens. For this reason, colonial relations produce conflicts characterized by violence experienced by their citizens, combined with an economic stagnation that impoverishes the working and middle classes.

The Puerto Rican liberation movement cannot remain solely an opposition force but must aspire for power to serve the people. Every nation constructs itself daily and diversely. We remember the people of Algeria who in a plebiscite confirmed their colonial relation with France but later won their independence in 1956. Today there are many nations without states that have begun the process of self-determination: Northern Ireland, Scotland, the Basque Country, Catalonia, and Quebec, to name just a few. Puerto Rico should join forces with all these movements for decolonization. It would seem that the world faces at least another decade of struggles for decolonization and the self-determination of peoples.