Migration and Small Business Investment Across the U.S.-Mexico Border

Each year, Francisco Morelos leaves the small community in Mexico’s Querétaro state, and enters the United States to seek work. Many like him dream of starting their own business and do so by laboring in the United States as undocumented workers and sending their earnings back home.

Each year, Francisco Morelos leaves the small community of Las Joyas, a cluster of farm houses high in the green forests of the Sierra Gorda Mountains in Mexico’s Querétaro state, and enters the United States to seek work. 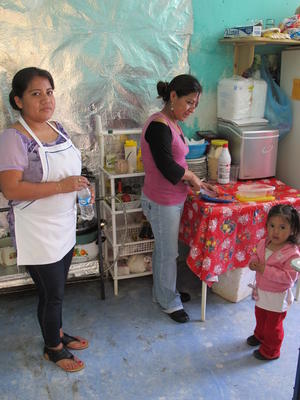 Juana Villeda (left) in the Kitchen of Her Small Restaurant

Morelos does not have authorization to enter the United States. But he manages to bypass the world of border patrol agents and human smugglers, or coyotes, because each year a former childhood friend who left Mexico decades ago and gained U.S. citizenship, lends Morelos his U.S. passport so can visit his family in Mexico and then cross back over the border to work in the United States.

“I’ve been going to the United States for 23 years now,” Morelos said in perfect English that he learned years ago while taking night classes after working long days picking oranges in Florida. “Over the last two decades, I’ve saved enough money to buy 40 hectares of land here in Las Joyas and to start a small ranch where I raise cattle.”

“There’s plenty of work to do here in Mexico,” Morelos said. “The big problem that many Mexicans face today is finding a way to raise enough money to start a business.”

In Morelos’s home of Querétaro, a small mountainous state in central Mexico, many locals who dream of starting their own business do so by laboring in the United States as undocumented workers and sending their earnings back home. When Morelos and I met, he had just returned to Mexico after working on a farm in North Carolina. He said that this time he will stay in Mexico for at least two years.

“I may have to leave for the United States once more to get my farm off the ground,” Morelos said, “but that will be the last time. After spending over two decades working in the States on and off, I’ve almost finished building my own home and business here in Mexico. Now, I’ll have something to leave my children.”

A few miles away from Las Joyas, following a dirt road that curves around the precipitous mountain turns of the Sierra Gorda, lays the small town of San Pedro Escanela. In this far-flung Mexican village, where most women still carry on the traditional role of cooking and raising children, Juana Villeda is something of a trailblazer. A San Pedro native, Villeda is a single mother and the owner of one of this small Mexican village’s only businesses, the Restaurante Villeda. 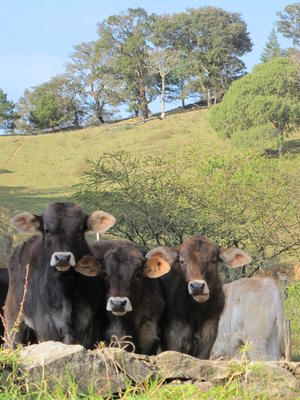 Villeda started her restaurant by laboring as an undocumented worker in Indianapolis. Throughout most of Mexico, the dangerous act of crossing the border to work physically-demanding jobs in the United States has traditionally been a man’s role. But Villeda is one of a growing number of Mexican women who have begun entering the United States in higher numbers over the last decade in hopes of creating a better life for their families back home.

When Villeda was 21-years-old she had already married a local man with whom she had two children.

“After our second child was born, my husband went to seek work in the United States,” Villeda explained. “He left for the States and we never heard from him again. He abandoned us. So I left my two children with my parents and went to the United States to find work, too.”

Villeda had several brothers who worked on chicken farms in Virginia and Pennsylvania who lent her the money to find a way to the United States. In the nearby town of Jalpan, she found a coyote who was taking a group of 40 into the United States near the Mexican city of Piedras Negras, just across the border from Eagle Pass, Texas.

“My journey into the United States started as a disaster,” Villeda recalled. “The coyote led all 40 of us through the desert and into Texas at night. Suddenly, a helicopter appeared above us, shining a spotlight. It landed and soon two more helicopters arrived with Border Patrol agents. The coyote yelled for us to scatter and hide. I waited alone at the base of a mountain while the Border Patrol apprehended about half of the group. After they left, the coyote whistled and yelled for us to come out of hiding. In total, we spent 28 hours trying to cross the border.” 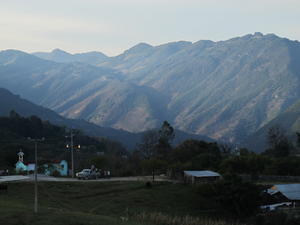 The Small Community of Las Joyas, High in the Sierra Gorda

Villeda was one of the lucky ones. She made it to the other side with the coyote who then dropped her off in a van bound for Indianapolis. After smuggling hopeful migrants over the border, many coyotes then leave them with other drivers that operate out of the main smuggling corridors in Arizona and Texas and who then transport them to different cities all over the United States.

“It was practically door-to-door service,” Villeda said. “They took me and several others all the way to Indianapolis, dropping some people off in cities along the way.”

Villeda had an uncle in Indianapolis who obtained a fake green card for her so she could work.

“I got up at 5 am each day to work for a cleaning company,” Villeda said, “then in the afternoon I changed into my uniform and worked the 5 pm to midnight shift at a McDonald’s in Indianapolis. On the weekends, I sold tamales on the street with my aunt and worked the night shift at McDonald’s. In total, I spent four years in the United States, normally working 15 hour days, seven days a week.”

“I was always tired,” she said, pointing to the first wrinkles around her eyes, “I only slept four hours most nights to work both jobs. But I made friends at the McDonalds. Most of the people who worked there were from Mexico, or Honduras and Guatemala, and they were undocumented like me.” 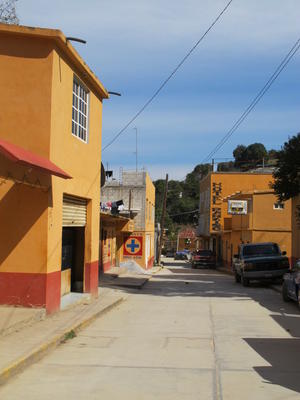 One Paved Road Cuts Through the Center of San Pedro Escanela

Villeda sent her savings to family back home. After four years of cleaning houses and slaving away for minimum wage at McDonalds, she was able to buy property and build her own house in San Pedro. While in the United States she also sent money to her sister, who used it to start The Restaurante Villeda, located right off San Pedro’s town square. Now, the two women work together in San Pedro’s only eatery.

“Almost everything here is from the United States,” Villeda said, while leading me on a tour around the restaurant, a small room filled with four plastic tables next to a cramped kitchen. “The television, our ice maker, and coffee pot, all of this stuff I sent to Mexico with a friend who was driving down here,” she said. “I had invested in all this stuff, so I couldn’t just throw it away when I came back home.”

Villeda enjoyed her time in the United States but has no desire to return. She hopes to use her income from the restaurant to send her two children to a good university.

“I started working when I was eight-years-old, washing clothes,” Villeda said. “I want my children to have the educational opportunities that I didn’t. Working in the United States also allowed me to buy land here in San Pedro and build a large house with four bedrooms and three bathrooms, so my children will always have a place to live in San Pedro.”

“The truth is that we’re quite happy here now,” she said, smiling as the afternoon sun shone in through the window and illuminated her small café.