In recent years, Honduras has become a chief transit point for drugs bound for Mexico and the United States. Local gangs, like the Mara Salvatrucha, often collaborate with Mexican drug cartels and have far more power and authority in most parts of Honduras than police. The combined lawlessness has caused Honduras to become the country with the world’s highest murder rate.

Alex Morales had it all: a college degree in computer engineering from USC, a home in southern California, a wife, and son.

Almost four years ago, Morales was driving home after a particularly stressful day at work. He stopped at a store, picked up a six pack, and decided to drink a beer on his way home. A policeman pulled Morales over and asked for ID. The officer discovered Morales was undocumented and arrested him. A week later, Morales was in an immigration detention center.

Morales crossed the border into the United States with his parents and a coyote when he was less than a year old. But unlike many deportees who enter the United States as children with their relatives, Morales’s parents were permanent U.S. residents.

“When my mom was pregnant with me, she went back to Honduras for several weeks to visit her family,” Morales said. “During that trip, she had a premature birth. I was born in Honduras at just seven months.”

“It was a crazy mistake,” he added. “That wasn’t the country I was supposed to arrive in. My siblings were all born in California. I just never became a naturalized citizen.”

Morales spent almost two years in a detention center fighting his case with a lawyer to remain in the United States. He said the process went on for so long without resolution that he eventually gave up.

“One day I told them to just deport me to Honduras,” he said. “I thought that I could start a new life there. Anything seemed better than sitting in jail.”

In recent years, Honduras has become a chief transit point for drugs bound for Mexico and the United States. Local gangs, like the Mara Salvatrucha, often collaborate with Mexican drug cartels and have far more power and authority in most parts of Honduras than police. The combined lawlessness has caused Honduras to become the country with the world’s highest murder rate.

Morales tried to start a clothing store in Honduras, but he said rising violence and the gang’s practice of extorting local businesses made it impossible for entrepreneurs to succeed. 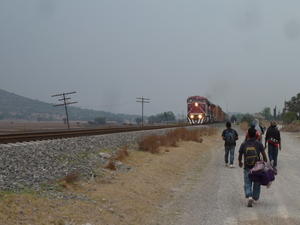 I first met Morales while sitting in a drain pipe underneath a stretch of railroad track two hours north of Mexico City. Outside, the first heavy storm of the rainy season unleashed a deluge upon the scorched earth. About twenty migrants from Honduras, and several more from El Salvador and Colombia, huddled together inside the pipe.

After a year in Honduras, Morales decided to head back for the United States. Like thousands of other Hondurans, Morales is attempting to cross Mexico by hopping on northbound freight trains. Mexican immigration officials are so successful in deporting Central Americans who attempt to ride in buses, that the trip north must be completed in a clandestine manner on trains.

As Morales and I talked, several migrants near one end of the pipe lit a fire to stay warm. A few people ventured outside to cut nopales—a cactus often used in Mexican cuisine—to roast over the fire. Others boiled water in a plastic coke bottle and tried to make coffee.  Suddenly, a gust of wind blew near the fire and filled the pipe with smoke. I jumped out into the rain with the migrants as we coughed and gulped in fresh breaths of air.

Many Central American migrants have stores or small businesses back home. They often leave when gangs demand bribes which they can’t afford. Those who can’t pay receive death threats, and usually flee north for their lives. A Honduran, named Ivis, who I met several weeks ago, left Honduras because a gang shot his cousin and then threatened him and his family. His cousin was killed because he was dating a pretty girl that a gang member had his eye on, an example of the brutal violence which has become the norm in this troubled Central American nation. Ivis said the gangs also killed his cousin’s girlfriend, too, out of spite.

Central American migrants who travel on trains through Mexico are often extorted by local police and the same gangs which they seek to escape in their home countries. Most migrants in the drainage pipe reported paying a $100 bribe to gangs who maraud the train lines in the southernmost Mexican state of Chiapas, where most migrants start their journey across Mexico.

“The craziest thing I’ve seen on my trip was a group of migrants who attacked several gang members that extorted people on the train,” Morales revealed. “The migrants beat them to death and then lit their bodies on fire.” 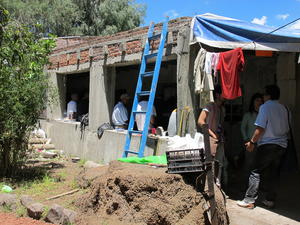 Former migrant shelter in Huehuetoca that closed in 2012

In most Mexican towns where the train stops for long periods of time, migrant shelters, often run by priests, await them. The shelters offer migrants food and a safe place to spend the night, even if it’s just on the floor.

The exception to this rule is La Lecheria, a rail yard outside Mexico City where the northbound trains stop for long periods of time before transferring to different lines that end in one of four different, and far-flung, points on the U.S.-Mexico border. Last summer, a migrant shelter in La Lecheria was closed after neighbors complained that it caused insecurity in the area.

In August, 2012, a new migrant shelter opened about thirty miles north of La Lecheria in the bustling town of Huehuetoca. It closed in less than three months after it was discovered that gang members were entering the shelter in search of migrants to kidnap. Today, a volunteer-run soup kitchen operates during the day in Huehuetoca near the site of the former shelter.

“Mara Salvatrucha forever,” a Salvadoran man, named Juan, standing outside the soup kitchen in Huehuetoca told me upon introduction. Juan was deported from the U.S. two years ago and is currently trying to return.

“I work for the mara smuggling migrants to the U.S. now,” Juan told me. “I’m hoping to use the money I make working for the gangs to one day return to the U.S., so I can see my wife and kid.”

I asked Juan if he travels on the train to do his work.

Juan said he, “knows people,” hinting at corrupt Mexican police and immigration officials who allow migrants to travel across Mexico with coyotes who bribe them.

“I know when it’s the right time to take the bus,” he added.

Later that afternoon, I walked up the train tracks with a large group of migrants to a curve where the train slows down and it’s easier to hop a ride. When the rain started we headed into the drainage pipe, where I met Morales, in search of refuge. The curve in the track lies near a dump outside of Huehuetoca where many migrants say they’ve been robbed. At dusk, the train still hadn’t come. For security concerns, my two colleagues and I decided to leave as darkness fell.

On our long walk back to Huehuetoca, a southbound train stopped for a moment on the track. Two Honduran teenagers sitting on the end of a boxcar invited us to ride on the train for a bit with them. I stepped up on the train. A few minutes later, it roared to life and started rolling over the track.

“Where you guys headed?” I asked the two Hondurans.

“The journey towards the U.S. is too dangerous. Too hard,” explained one.

“We’ve decided to turn back and start a new life in Mexico City,” said the other.