With a narrow focus on the left’s recent experiences, these collected essays successfully contextualize the issues confronting the movements, parties, and governments of Latin America’s radical left. 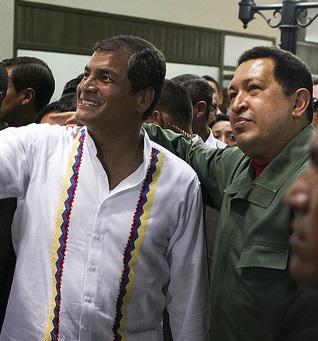 Ably edited by long-time Venezuela scholar Steve Ellner, a strength of this volume on Latin America’s left governments is its willingness to allow for critical disagreement. The twelve contributors debate many of the principal issues raised by experiences (incomplete though they may be) in Venezuela, Bolivia, Ecuador, Cuba, Nicaragua and El Salvador, as well as addressing similar topics more broadly across the region.

The book is rich in analysis about whether international conditions and regional levels of economic development allow for the construction of socialism; about the role of the traditional proletariat in the struggle; and, in a number of essays, about whether the left should concentrate on contesting state power or whether it should focus on increasing its influence within civil society. These issues have long been fraught among leftists and so the fierce—though respectful—debates among the book’s contributors, come as no surprise.

In the first of four Venezuelan chapters Marcel Nelson charts the way President Hugo Chávez, who ruled from 1998 until his death in 2013, moved from attempting to negotiate Washington’s proposed Free Trade Area of the Americas (FTAA) to his role in burying the FTAA and proposing the Bolivarian Alliance for the Americas (ALBA) as an alternative. Nelson faults Chávez for the ad hoc way this transition came about, contending it was symptomatic of a more general failure to institutionalize Bolivarian policies. The result, he argues, is that the Bolivarian state remains fragmented, with a wide but weakly organized political movement as its base. By contrast, Diane Raby, in a more thematically focused chapter, contends that charismatic, populists, such as Chávez and Bolivia’s Evo Morales, have advanced the prospects for fundamental transformations by mobilizing the poor and dispossessed to reclaim democratic development.

In his discussion of conflict within the Bolivarian labor movement Ellner draws a distinction between two camps of Chavista union leaders: “autonomists,” who seek to maintain a critical distance from the government’s policies, and “non-autonomists,” who prioritize united defense of the government against its domestic and foreign enemies. On the one hand, this division illustrates Nelson’s argument about fragmentation at the Chavista base; neither parties nor ministerial authorities seem to be able to moderate the conflict, which at times has escalated into violence. On the other hand, Raby might well respond that Chávez possessed the charismatic authority to intervene effectively, often by moving to the left on nationalization or by backing demands for more worker participation at the workplace.

Chávez’s economic experiments, Ellner argues, also aggravated the relationship of the Bolivarian government with labor. Union leaders in both camps often saw the Chávez administration’s efforts in the mid-2000s to promote “endogenous development” through support for cooperatives, micro-enterprises and workers councils as undermining the political and economic rights of unionized workers. Ellner points out that labor unions, historically the most reliable base for socialist politics, are but one sector within the Chavista base.

Thomas Purcell’s chapter raises doubts about the viability of Venezuela’s endogenous development, which has depended heavily on subsidies made possible by resource rents. Funds from oil exports have been channeled, for example, toward cooperatives, micro-enterprises, and industries that are either self-managed or co-managed by workers.  Based on field research into three agricultural cooperatives, Purcell fears that the result so far has been to increase the dependency of inefficient small producers upon the state. Purcell questions whether a strategy of small-scale, self-managed production can ever sustain itself without the availability of these rents.  He further suggests that Maduro, with his background as a labor leader, might diverge from his mentor’s policies on endogenous development.

The chapters on Ecuador by Marc Becker and on Bolivia by Federico Fuentes draw divergent conclusions about the relationship between the pink tide governments and civil society. Becker highlights the growing distance between President Eduardo Correa and Ecuador’s indigenous movements. Correa may deserve credit for redistributive policies, says Becker, but his expansion of mining and oil extraction has alienated the indigenous movements that contributed significantly to his rise to power. Fuentes sees a similar gap growing between Evo Morales and indigenous movements in Bolivia. However, he is critical of those who see hypocrisy or betrayal in the refusal of Morales to break with the extractive model and to fully implement the promised consultation and autonomy for indigenous communities. Morales has attempted to comply with requirements for consultation, says Fuentes, but indigenous politics itself is complex, and groups often do not speak with one voice. Fuentes characterizes the tension between Evo’s promises and economic policies as “creative” because the Bolivian leader has opened space for debate within the indigenous movement.

Like Fuentes, Héctor Perla and Héctor Cruz-Feliciano ask fellow leftists for some patience and understanding of the challenges facing leftist governments, in this case those of the Farabundo Martí National Liberation Front (FMLN) in El Salvador and the Sandinistas in Nicaragua. The policies of the two parties, they say, “appear to clash” with the objectives of the “mythical guerillas” who fought for revolution in the late twentieth century. The authors contend that leftist critics have often failed to acknowledge the objective limitations on a government’s ability to move directly onto a revolutionary path.

A major impediment for the FMLN and the Sandinistas, say Perla and Cruz-Feliciano, is the extremely low level of economic development in Central America. Quoting the Salvadoran leader Shafik Handal, they argue that maintaining popular support for socialist goals requires compromises that contribute to “solving the urgent problems of people’s lives.” This position is certainly defensible, though Perla and Cruz-Feliciano question whether the FMLN and Sandinistas actually retain “socialist aspirations.”  They acknowledge after all, that neither party has taken full advantage of opportunities to advance the interests of the poor majority, and both have retreated from earlier advances, especially in the case of women’s rights.

The inclusion of Cuba in the volume suggests that no discussion of socialism and revolution in Latin America can simply treat the Cuban experience as idiosyncratic and irrelevant to contemporary debates. It is there alone that a transition from twentieth to twenty-first century socialism is being debated from a position of power, though the word “transition” is generally taboo because of its association with U.S. promoted “democratization” projects.

Camila Piñero-Harnecker finds three tendencies, corresponding more to discourses in conflict during the reform process launched by Raúl Castro rather than well-defined factions in the Cuban Communist Party. The tendencies are: (1) suspicion of compromises made with market forces; (2) advocacy of pragmatically mixing market forces with state control and planning; and (3) promotion of democratic socialism based on self-management in productive relations and greater autonomy from party control for social movements.  Piñero-Harnecker expresses her own affinity for the third tendency but seems pessimistic that it will prevail.

With the exception of Piñero-Harnecker, the authors of these essays pay little attention to the lessons of the Cuban experience with socialism – although that country’s revolution remains, positively or negatively, the most extended experience with any kind of socialism in the hemisphere.  There are some other omissions: None of the chapters make more than a passing reference to the relations between leftist governments and the bourgeoisie and business sectors, nor to relations with the organized political opposition. And a chapter examining the record of the moderate left in power might have provided a useful basis for assessing the degrees of separation – or not -between the radical and moderate lefts.

But by focusing the lens more narrowly, this volume succeeds admirably in defining the issues confronting the left—both activist and academic—in general. Ellner’s short conclusion argues that, “the obstacles and complexities arising from the experiences of the twenty-first-century Latin American left…are quantitatively and qualitatively different from the twentieth-century cases of leftist rule throughout the world.” He anticipates that socialist thought and action will tend to emphasize the importance of marginalized sectors, social over economic goals, and subjective over objective conditions. In his essay, the late Roger Burbach—who died while this volume was in press—takes a similar position, arguing that socialism was so set back in the twentieth century that regaining momentum will be difficult everywhere. The priority, he argues, is dismantling neoliberalism, and that means accepting a degree of capitalism—and diversity—for years or decades to come.

A uniting thread of the book is rejection of the claim by Mexico’s Jorge Castañeda that the left can be divided into “good” social democratic and “bad” radical populist regimes. A chapter by Kevin Young is devoted entirely to demonstrating the omnipresence of this trope in the U.S. media. Ellner argues that the division is false, first of all because it fails to take into account the diversity of circumstances and social conditions in the pink tide countries, and second, because the more moderate social democratic governments, such as those found in Brazil and Chile, often are confronted by similar challenges, especially in regard to relations with social movements and to extractive economies.

Ciccariello-Maher stands apart from other contributors on the question of whether the division of the left into “good” and “bad” makes any sense whatsoever. Rather than reject the distinction, he reverses the polarity. He sees left governments as standing on the shoulders of social movements. For him the “good” left governments are those that remain faithful to the goals of the movements; the “bad” left has betrayed them. The reader, aware thanks to this collection, of the “complexities and challenges facing the left,” might wonder if any left government would ever, by Ciccariello-Maher’s criteria, qualify as “good.”

Daniel Hellinger is professor of international relations at Webster University. His most recent book is Comparative Politics of Latin America, Democracy at Last? (2nd ed., Routledge).