Not so “peacefully” green 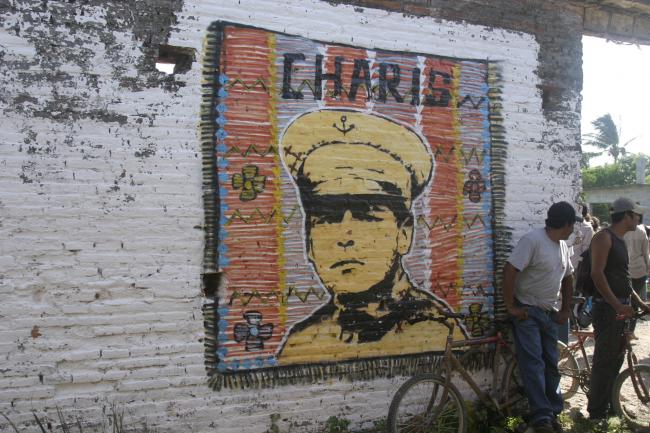 On a sunny afternoon in July 2013 we sat in a blockade in Alvaro Obregon, in the municipality of Juchitán, Oaxaca, along the southern Isthmus of Tehuantepec, to listen to fishers and farmers reflect on life at the Isthmus. Since 2012, these Istmeños have blocked the only access road to the Barra de Santa Teresa—a thin strip of sand and mangroves that separates the Mar Superior from the Mar Inferior on the Pacific coast of the Isthmus—to stop the construction of what would be Latin America’s largest wind-farm: the San Dionisio project. The now shelved project would have required 102 turbines and transmission infrastructures, and would have been the eighteenth wind-farm constructed across the southern Isthmus since 2006.  Developed through a contract between Marena Renovables (a consortium made up of Australian merchant bank Macquarie’s Macquarie Mexican Infrastructure Fund, Japan’s Mitsubishi Corp. and PGGM, a Dutch pension fund service provider), this project illustrates a growing global trend in “green” financial investments for private providers and consumers of electricity. In the case of the Isthmus, a series of factors are at play: a partial denationalization of the Mexican electricity sector in 1992, which allowed private sector actors to participate in their own power generation activities; the “high quality” of wind; an expanding market of commercial and industrial consumers that claim to support more sustainable energy sources; and the high price of supplying power, regardless of the resource—renewable or nonrenewable. The incentive for investment is high. Wind farms in this region almost entirely generate electricity for the growing needs of large-scale energy consumers like Wal-Mart Mexico, baking company Grupo Bimbo, beverage manufacturer Femsa Coca-Cola, Heineken’s Mexican operations, cement producer and building supplier CEMEX, and the world’s largest producer of silver and Latin America’s largest producer of gold, lead and zinc, Met-Mex Peñoles. The highest values of electricity sales are concentrated in the areas where these companies operate. With electricity prices increasing in tandem with new market advantages in “green” consumption, purchasing “green” power makes good business sense.

At the blockade, Istmeños spoke about their struggles over land, livelihoods, and recognition. They feared that large-scale wind energy projects devalued land, territory, and autonomy. They talked about the future; if the wind farm is built, surrounding lands will be fenced off, and they won’t be able to fish from the Barra or harvest their crops. The constant whir of the turbines–as constant as the winds that blow year round–will drive the fish away and people will have to move to the city to find work; where, for most they say, there is hunger. Livelihoods are shaped around the wind. From the Barra, when the strong North winds blow, Istmeños set their nets from the beach. When the wind shifts and mellows, they launch their boats. Across the southern Isthmus they cultivate the Zapalote Chico (xhuuba huinii), a variety of corn that remains a staple today and that can withstand winds over 100km per hour, common in the Isthmus.

The blockade in Álvaro Obregón has catalyzed a community-wide effort to reassert agency over traditional decision-making processes and activate rights to self-determination. Residents refused to participate in formal local government elections in July 2013, preventing Mexico’s electoral commission from setting up voting booths.  In their view, elections are a clientelist mechanism abused by political elites; on 13 December 2013 they elected their own representatives, the cabildo comunitario. Their struggle against wind farming does not target the technology per se, or represent a failure to appreciate the gravity of human-induced climate change. Rather they reject the ways these projects reproduce the colonial legacies that Binniza and Ikjoots peoples have struggled against, uninterrupted, for centuries. Their resistance against the commodification of wind, framed around the protection of territory and futures with dignity, illustrates what is largely overlooked in “green” solutions to energy problems: harnessing renewable resources requires actual enclosures that put local ways of life at risk.

Some might dismiss the voices of Istmeños blockading wind energy development as “misinformed” or “too local.” In the global scenario, harnessing wind’s energy is believed to have the potential to mitigate the risks of climate change and energy insecurity, and sustain economic growth—with a smaller extractive footprint than conventional resources. Renewable energy technologies now comprise 60% of Clean Development Mechanism (“CDM”) projects worldwide (one of the featured Kyoto protocol strategies for reduced-emissions development, accounting for 43% of the expected annual emission reductions, and 71% of total investment). Of the eighteen large-scale wind farms constructed across the southern Isthmus since 2006, fifteen are registered under the CDM. Such projects not only benefit from global climate change financial incentives; in Mexico, debt capital markets—support schemes based on limited taxes and exchange controls for investments in renewable energy equipment—along with favorable repatriation of foreign investment returns (guaranteed under investment treaties such as NAFTA), promote a “clean energy” investor-friendly environment. With global investment in renewable energies reaching $310 billion in 2014, states, firms, investors, and international organizations are enthusiastically hailing green energy as the next “win-win-win” solution for private capital, governments, and citizen-consumers alike.

In practice, however, the “win-win-win” solutions of green power are not as straightforward.  Research on “green grabbing” and “carbon violence” demonstrates the hidden costs of nature marketization, and how long histories of land enclosures—and exclusions—are a constituent condition of these market-based solutions. As in past land struggles, Istmeños resisting dispossession face violent responses from state and private interests, who sometimes rely on armed security to restrict access to previously used areas and to attack local opposition, and other times encourage political schisms between Istmeños. Consistent with new waves of extractivism, the “win-win-win” promise of capital-intensive clean energy projects presents the destruction of rural peoples’ lifeworlds as a side effect of an otherwise “beneficial” cure to systemic poverty and inequality.

A new Eldorado for “green” investors

Latin America is a rapidly-expanding wind energy market, which energy analysts have recklessly referred to as the “new Eldorado” for European investors. Mexico is Latin America’s fastest growing wind market outside of Brazil, and the southern Isthmus of Tehuantepec is a prime investment location, “gifted” with roughly half of Mexico’s 40,000MW to 77,000MW of economically viable wind resources.  To incentivize private investment, cartographic, legal, policy, and economic reforms (traceable to the early 1990s) rendered wind as a resource that could be owned and harvested. Putting wind to work–harnessing its movement “effort” through complex assemblages of turbines, towers, cables, transmission lines, and substations—produces wind as a commodity that can be exchanged in local and global markets (as “green” mega-watts and carbon-credits).

Struggles against wind commoditization cannot be separated from the long and complex history of indigenous political organizing and armed rebellion for land, territory, and autonomy in Mexico’s southern Isthmus. Indeed, Alvaro Obregón residents routinely invoke the memories of General Charis and the unfulfilled promises of the Mexican revolution in their struggle against wind projects. Through occupations, organization, and the media, they bring attention to the fact that to harness wind and farm electricity requires networks of towers, turbines, transmission lines, and substations that fix land in private hands. Wind farms currently enclose between 10,000 and 15,000 hectares, but could extend to between 40,000 and 50,000 hectares if the “full” wind energy potential of the region is developed. These land enclosures negate the claims of affected peoples for dignified ways of living and, in the long term, threaten their survival, as they erase land’s role in local production activities that supplement incomes. Calling out the dispossessions that accompany wind energy infrastructures, Istmeños raise questions about hidden costs of “green energy” projects embedded in the logics of value (how wind comes to bear value, how this value is captured, and by whom) and the logistics of extraction (how mapping, carbon credits, and infrastructures marketize green power). Their resistances signal the epistemic violences of “green” power: the reinvention of the Isthmus as a space of “green” capital flows that devalues and erases local land uses and political agency.

The Mexican Association for the Development of Wind Energy (“AMDEE”), which represents wind energy companies in Mexico, describes productive activities in the Isthmus as underproductive and frames local opposition as minor, isolated, and driven by “external agitators” with “unacceptably” political motives. Yet, on 9 January 2014, due to escalating local resistance (including legal and non-judicial proceedings, direct action and civil disobedience, awareness-raising activities, and local organizing), the high-stakes San Dionisio project was stopped then relocated from Alvaro Obregón to El Espinal, in the Municipality of Juchitán. The project carries a new name, and is pursued by a new development company—Energía Eólica del Sur.  It will require securing about 5,332 hectares of land to construct and operate the 396MW project, powered by 132 turbines, and will still provide electricity to private consumers for profit.

Mexico’s expansion of renewable resource frontiers is an example of a growing trend in policy solutions for the post-2015 global “green” development agenda. Istmeños living the consequences of these trends point to the costly enclosures of development models that propose “solutions” to human-induced climate change. Connecting “green” power, wind territory, and dispossession, they expose how global climate politics urge legal, policy, and technology changes that produce market “win-win-win” solutions while simultaneously erasing the place-specific politics of wind—that is, who bears (which) costs in such solutions, and with what consequences. The harnessing of renewable natures for sustainable development has more in common with the problems associated with conventional extraction of oil, gas, or minerals than previously recognized. While Istmeños have proposed alternative development visions grounded in supporting valuable existing biocultural agrarian systems (such as the cultivation of the Zapalote Chico), market-based solutions continue to discount the value of human rights, living a dignified life, and the right to claim civil society spaces. A sustainable future for Istmeños needs a different praxis of valuation. Beyond “good investment climates,” energy transitions must involve the transformation of the structures of energy production, provision, and consumption to cultivate and generate values outside the capitalist logic of utility and accumulation.

Scott A. Sellwood is a Program Officer in Oxfam America’s mining, oil, and gas team.  For years he defended renewable energy projects, and, with a small group of dedicated lawyers, took on some of the world’s biggest coal companies.  His work focuses on exposing—and transforming—the direct and hidden violences of extractivism. Scott’s views expressed here are his own, and are not necessarily those of Oxfam America or Oxfam International.

Gabriela Valdivia is an Associate Professor in the Geography Department, University of North Carolina at Chapel Hill.  She examines resource governance in Latin America, focusing on the political life of resources. Her latest project focuses on the struggles of Afro-Ecuadorian and Native Amazonians with the Ecuadorian oil complex.