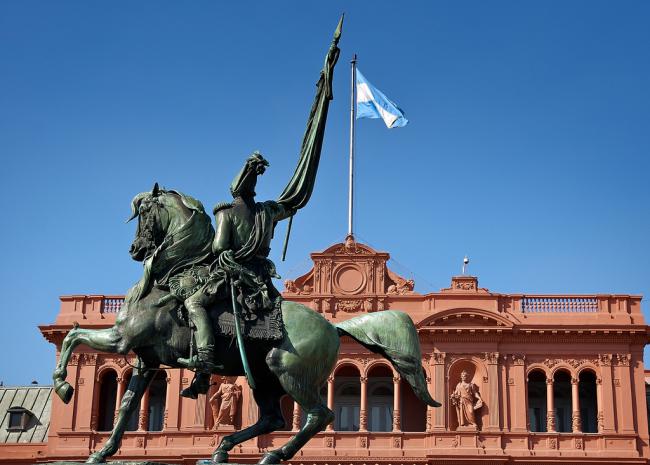 In more ways than one, Argentina’s October 25th elections represented a watershed moment in the country’s political history. After twelve years of a populist, center-left government, Argentine politics are on the brink of turning right. Even if Peronist Daniel Scioli beats out conservative businessman and Cambiemos coalition candidate Mauricio Macri in a presidential runoff election November 22, the landscape of Argentine political life is likely to be changed for the foreseeable future.

Last week’s election confirmed that there is now a strong center-right party in Argentina. The leadership of that party is decidedly “porteño” in origin, unapologetically pro-market in its ideological orientation, and led by members of the country’s economic elite. What’s more, Macri’s Cambiemos coalition has shown that it has the ability to win votes among the poor on its own.

The election was not good for Peronism. The Peronist candidate, Daniel Scioli, raked in the lowest share for the party since 1983 (37%), while the Cambiemos coalition surprised everyone, obtaining 34% of the national vote. The election in the province of Buenos Aires, which contains 38% of all Argentine voters, included even greater losses for Peronist candidates. Even though the province of Buenos Aires is historically a Peronist stronghold — a non-Peronist governor has not been elected there since 1983 — Cambiemos won the governorship of the province by four points (39% to 35%). In the cities of the province, voters rejected half of the Peronist mayoral incumbents. This included the defeat of a Peronist trade union leader and sitting mayor, Francisco “Barba” Gutiérrez, who lost in the city of Quilmes to a TV chef. Peronism even lost for the very first time in the town of Berisso, nicknamed “the cradle of Peronism.” The first protesters demanding Juan Domingo Perón’s liberation from prison famously marched from Berisso to Buenos Aires in 1945, a moment that is considered the birth of the Peronist movement.

Moreover, as electoral distribution maps show, the results of October’s elections mean that, for the first time in Argentine history, the same party could control the city of Buenos Aires (which began electing its head of government in 1996), the province of Buenos Aires, and the presidency. Both the new governor of Buenos Aires and the Buenos Aires mayor are close allies of Mauricio Macri, having risen to their current positions from within Macri’s own inner circle rather than holding positions of local leadership. Neither of them have their own loyal constituencies and would likely answer to Mauricio Macri in a very direct and vertical manner, should he be elected.

A rightward shift in Argentina’s electoral landscape does not necessarily have to do with the candidates per se. Both Macri and Scioli are the sons of wealthy businessmen, and there is little evidence that their public policy portfolios are drastically different. While Macri’s father amassed his fortune as a public works and housing contractor working for the Argentine state, Scioli’s father was one of the owners of Canal 9, a massively popular TV network in the sixties and seventies. Both came into the public eye through sports; Scioli was a speed-boat racer and Mauricio Macri was the elected president of one of Argentina’s more popular soccer clubs, Boca Juniors. And both bring executive experience. For eight years, Daniel Scioli was governor of the province of Buenos Aires, while Mauricio Macri has governed the city of Buenos Aires for two terms. Instead, the rightward shift is more structural, and has emerged out of Macri’s success in building what Argentina’s economic establishment has never had: its own party.

Argentina’s political party system is, as most analysts stress, a curious animal. In the twentieth century, it had a relatively strong party system, particularly when compared to other South American countries. The only two national parties — the Peronist party, officially known as the Partido Justicialista,  and the Unión Cívica Radical (UCR) — split the vote almost evenly in the first democratic election of 1983, after the country’s military dictatorship came to an end. But what made Argentina's political party system so unique is that neither one of these two main parties could be accurately characterized as a right-wing or leftist party. Rather, each contained its own respective left and right wings, a fact which often led to ferocious intra-party conflict. Given that Cambiemos is a much more ideologically-defined, pro-market coalition, this situation is about to change.

Another unique characteristic of Argentine political history was the way that the country’s economic elite lost control of the political process in the early twentieth century. Argentina’s economic and cultural elite, associated with landed interests and guided by a free-trade ideology, spearheaded the modernization of Argentina starting around 1880. However, urban middle-class demands for political participation at the turn of the century challenged the “oligarchical democracy” of the  Argentine belle epoque. Argentina’s conservative parties collapsed under the weight of this transition from a limited democracy to a mass democracy. The rise of the middle-class UCR initially displaced the conservative political elites. The emergence of the working-class-based Peronist movement in the middle of the twentieth century completed this process.Throughout the twentieth century, Argentine politics never included an elite party or coalition like the British Conservative Party or even the Chilean “Concertación para el Cambio” — a coalition party fronted by members of that country’s elite, with both an openly pro-business economic agenda and the capacity to win the vote of popular sectors in fair and open elections.

This is not to say that members of the economic and cultural elite did not have political power; in many ways they did. However, that power was not specifically electoral. Because neither the Sociedad Rural Argentina, the lobby of Argentina’s large landowners, nor the Unión Industrial Argentina, the country’s industrialists’ association, could compete for votes directly, their interests were represented indirectly, often enforced through military intervention, or, after 1983, through the “outsourcing” of electoral power to neoliberal Peronist candidates, as occurred under former Argentine president, Carlos Menem. Cambiemos changes that, so to speak. This is a party that is directly “run by its owners”: fronted by a wealthy businessman and surrounded by former CEOs and technocrats.

The policy implications of a possible Cambiemos presidency remain difficult to parse. There is no question that most of the economic and policy advisers that the coalition has recruited advocate what political scientists Steven Levitsky and Kenneth Roberts have called “social liberalism” — that is, support for maximum freedom for economic markets and a reduction of state intervention, with the exception of some anti-poverty initiatives. In matters of foreign policy, leaders of Cambiemos have also suggested that they would re-align Argentina toward the United States, and away from Brazil and other South American nations.

Yet the extent of the promised “change” is hard to gauge. The leadership of Cambiemos continues to adhere to a strategy of promising as little as possible, even as it builds a base of volunteers that the party has recruited from NGOs, the business community, and private universities. Macri’s record as mayor of Buenos Aires under PRO, the main partner of the Cambiemos coalition, may speak to one path his government would pursue, should he win in November. As mayor, Macri governed the city of Buenos Aires by making quiet changes rather than initiating sudden transformations. He defunded social programs that his administration disliked, rather than shutting down such programs completely. In Macri’s Buenos Aires, nominal support for public schools continued, for example, but increasingly special subsidies went to private schools instead. The same was true of his approach to the city’s understaffed and under-resourced public health system.

At the same time, a Macri government would almost certainly return Argentina to the capital markets, both settling the bill with the foreign “vulture funds” and using foreign-issued debt as a mechanism to offset the costs of liberalizing the dollar and eliminating soybean export taxes. Most explicitly, a Cambiemos government has promised to carry out its program without what some party members have bemoaned as Cristina Fernández de Kirchner's abrasive political style.

No matter the outcome of November’s runoff vote, October 25th marked the awakening of a center-right national party in Argentina. Led by the heir to one of Argentina’s largest fortunes, the ability of Macri’s Cambiemos coalition to win in both wealthy and humble neighborhoods — from the uber-exclusive, porteño neighborhood of Recoleta (where it took 70% of the vote) to the working class neighborhoods of Berisso and Tres de Febrero — underscores a significant political shift. This is a remarkable break from the past and one that will have lasting consequences for Argentina and, quite possibly, for the region as a whole.

María Esperanza Casullo is a political scientist. She has a PhD in Government from Georgetown University and is an associate professor at Universidad Nacional de Río Negro, Argentina.