The Case Against the “Humanitarian Border”

How the Border Patrol’s humanitarian rhetoric only furthers the militarization of the U.S.-Mexico border. 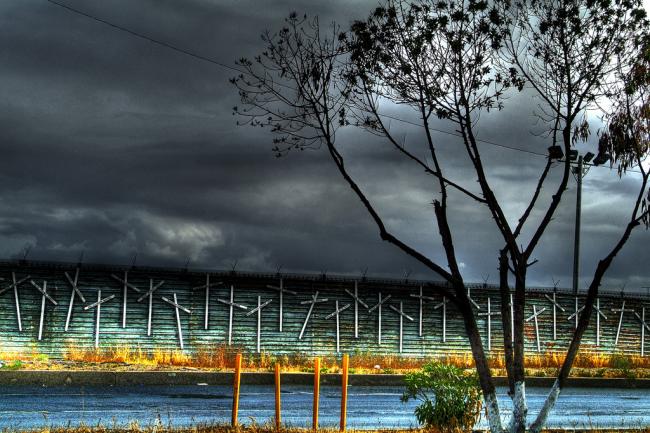 For unauthorized migrants, more restrictive and militarized border enforcement regimes worldwide have made transnational migration an increasingly deadly endeavor. The International Organization for Migration estimates that since the early 1990s, over six thousand migrants have died in the borderlands where the United States and Mexico meet, while over 22,000 people have perished in the Mediterranean Sea.

In response, assemblages of NGOs and governmental agencies have emerged in many border regions to mitigate the physical consequences of border enforcement. From military-assisted policing and surveillance efforts to migrant reception and aid centers, these efforts are loosely grouped under the umbrella term “humanitarian interventions.” Each provides a different level of assistance and opens or closes different legal avenues for the migrants involved.

Political scientist William Walters has referred to the proliferation of migrant aid and services in the borderlands as the emergence of the “humanitarian border” — a direct response to the deadly nature of contemporary border enforcement policies and the global economic and geopolitical realities that compel unauthorized migration attempts.

While NGOs have long carried out humanitarian aid efforts, within the context of contemporary border and immigration enforcement state agencies like the U.S. Border Patrol and the EU’s Frontex have become key providers of humanitarian aid, blurring the line between rescues and arrests. While these rescue efforts have undoubtedly saved some migrant lives, the entry of the state into the business of migrant rescues most often saves migrant lives simply so that they may be more efficiently deported.

Since the late 1990s when the U.S. Border Patrol adopted militarized enforcement strategies, migrant mortality rates have increased dramatically along the U.S.-Mexico border: from 0.44 deaths/10,000 apprehensions in 1998 to 4.5/10,000 in 2005 and then to over 14/10,000 in 2011. This increase is the result of a border enforcement strategy that explicitly and intentionally funnels unauthorized migrants into more dangerous terrain in order to increase the mortal danger of unauthorized migration.

For decades now, the U.S. Border Patrol has believed that making unauthorized migration more deadly will persuade migrants to forgo illicit crossings, but this has not proven to be the case.

In response to the dramatic increase in migrant deaths, NGOs like No More Deaths and the Tucson and Green Valley Samaritans emerged in the borderlands of southern Arizona in the early 2000s. For more than ten years volunteers from these organizations have patrolled known migrant trails, leaving lifesaving food and water and providing direct aid to migrants.

However, the work of these organizations has been curtailed over time as the Border Patrol’s involvement in regulating and providing aid has expanded.

At first these organizations operated with little interference from the Border Patrol.  Until 2005, a gentleman’s agreement with the Tucson Sector Border Patrol leadership allowed humanitarian aid workers to transport migrants to local hospitals to receive medical care.

Moreover, when Border Patrol agents came upon sick and injured migrants, they were instructed to simply call emergency services (911) to provide care and transport migrants to local or tribal hospitals without establishing the migrants' legal status. Migrants who were taken to hospitals were then treated and released without any further interaction with the Border Patrol.

These informal policies functioned as a type of off-the-record humanitarian exceptionalism wherein the sick and injured were less subject to processes of apprehension, detention, and deportation. The policies were also driven, at least in part, by an economic motive — by handing over sick and injured migrants to local hospitals and NGOs, the Border Patrol was not responsible for the costs associated with providing migrant care, which reached from hundreds of thousands to even millions of dollars in the first decade of the 2000s.

Practices that allowed the sick and injured to skirt the enforcement regime also rested on a different understanding of unauthorized migrants during this time. Border Patrol agents from this era report that unauthorized migrants were not thought to present a substantive national security threat (terrorist or otherwise).

Rather, as one longtime Border Patrol agent commented, “we referred to them as mostly being ‘good old boys.’ They were coming across to get a job to support their families. Doing the same thing we probably would’ve done if we were born on that side of the river or the border.”  So informally allowing a few hundred sick or injured migrants to slip through the enforcement regime each year was largely a non-issue among both the Border Patrol’s rank-and-file and local leadership.

Starting in 2005, however, the Border Patrol’s approach shifted: The agency informed No More Deaths and other humanitarian aid organizations that they would be put under 24-hour surveillance and threatened to arrest anyone who transported migrants for any reason.

This shift was driven by at least two factors: the Border Patrol’s Tucson Sector changed over to a more hardline leadership in late 2004 and in 2003 the Border Patrol was incorporated into the Department of Homeland Security, driving a massive increase in the number of agents in the sector and expanding the scope of enforcement activities to link border enforcement to terrorism prevention.

The Border Patrol’s new, harsher stance was quickly apparent to aid workers. In addition to the visible 24-hour surveillance of No More Deaths’ desert aid camp, two of the organization’s volunteers were arrested while transporting three migrants to a hospital to receive medical care in July 2005. While the felony charges against the activists were eventually dropped, the event illustrated the dramatic shift in local Border Patrol approaches for interacting with, regulating, and criminalizing the work of aid organizations.

In a number of documented cases since then, Border Patrol agents have sabotaged or destroyed water and other resources left for migrants by humanitarian aid volunteers along migrant trails. Additionally, agents have repeatedly entered the No More Deaths desert aid camp without a search warrant or other authorization.

Invoking the doctrine of hot pursuit, agents have used the pretext of tracking human or drug smugglers only to apprehend migrants receiving medical care. With little inquiry into their medical status or condition, migrants are simply taken into custody by the Border Patrol and in most cases quickly processed and deported. Reports of the systematic abuse of migrants in short-term Border Patrol custody, including the denial of medical care, makes their forced transfer into Border Patrol custody particularly worrisome.

As the work of aid organizations is increasingly regulated and criminalized, the Border Patrol has become more intimately involved in providing and overseeing the care of migrants. No longer do agents simply call 911 when they encounter sick or injured migrants. Rather, they first establish whether a migrant is in the country with authorization and then make an initial health assessment. If they determine that the migrant needs medical care, he or she is given the “option” of being transported to a local hospital.

Border Patrol policies, however, require that unauthorized migrants receiving medical care be separated from family or traveling companions, which many migrants are unwilling to accept.  As a member of the Border Patrol’s search and rescue unit commented, they decline further treatment “because they just want to be incorporated back into the group that they’re with, their families.”

For those who opt to receive additional medical attention, care is carried out under the constant surveillance of Border Patrol agents who stay with migrants twenty-four hours a day until the treatment is completed. Hospitals are thus transformed into de facto detention centers where Border Patrol agents, not hospital staff, decide if migrants are handcuffed to their hospital beds while receiving treatment. Upon being discharged from the hospital, migrants are then immediately subject to processing and deportation proceedings.

The criminalization and regulation of non-governmental humanitarian assistance coincides with the emergence of the Border Patrol as a provider of minimal life-saving aid to migrants — but aid that is contingent on their subsequent detention and deportation.

While border-enforcing state agencies increasingly refer to the number of migrants saved to justify the further securitization and militarization of the border, in actuality the entry of the Border Patrol into the realm of migrant care has proved to be a double-edged sword.

Some lives are saved, certainly, but most migrants are left with far fewer options for receiving care outside the apprehension-detention-deportation cycle. At the same time, migrant mortality rates continue to climb as more restrictive border enforcement policies compel migrants to risk longer and more dangerous journeys.

The humanitarian border emerges when increasingly securitized and militarized border enforcement regimes make transnational migration a deadly endeavor for those fleeing violence and economic destitution throughout the world. However, far from challenging exclusionary border enforcement regimes, “humanitarian” policies carried out by or in conjunction with border-enforcing state agencies reinforce and expand efforts to secure and militarize the borders of the Global North.

At times, search and rescue efforts may preserve migrants’ lives, but only so that they might be more effectively apprehended, detained, and deported. At others, border enforcement objectives trump those concerned with migrant health and wellbeing, leading to the further abandonment of migrants as 911 calls are not answered and search and rescue efforts are not initiated.

Activists and scholars committed to more just border enforcement policies must continually question the invocation of humanitarian rhetoric within the supremely contested arena of border enforcement. Humanitarian discourse is invoked and mobilized by governments and human rights organizations in ways that reinforce the spatial framework of the nation-state, which Joseph Nevins and others have shown is central to justifying exclusionary immigration policies.

Unlike discussions of rights or justice, humanitarian discourse invokes a “politics of pity” and minimalist intervention that works in tandem with calls to increase border securitization and militarization efforts in the name of saving lives.

Human smugglers — not transnational capitalism, global economic inequalities, or uneven geopolitical relations — are identified as the cause of migrant deaths, such that criminalization and prosecution become the logical policy response to ending deaths.

Within this context, the humanitarian border simply exists as a stop-gap measure to save some lives only to return them to the very conditions from which they were fleeing. For example, the U.S. Border Patrol refers to policies that deport Mexican migrants to distant border towns far from where they initially crossed into the United States as necessary to help prevent migrant deaths. These policies, however, increase the likelihood that migrants will experience various forms of violence, including abduction and assault, while failing to decrease unauthorized crossings.

As long as the very agencies that police national borders are those tasked with ensuring migrants’ safety, humanitarian intervention will be joined to exclusionary and unjust border enforcement efforts — rendering increasingly vulnerable those whose best option is stepping onto a rickety boat or into the wide expanse of a seemingly endless desert.

Jill M. Williams is an Assistant Research Social Scientist with the Southwest Institute for Research on Women at the University of Arizona. Her research examines contemporary border and immigration enforcement policies and their effects on unauthorized migrants and transnational mobility