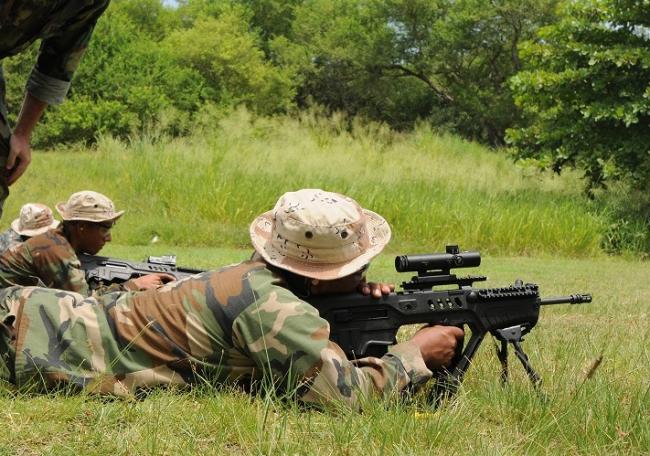 On January 6, 2016, the Guatemalan Public Ministry made an unprecedented announcement: they had arrested 18 high-ranking former military officials. The officials were charged with leading a campaign of forced disappearances and massacres from 1981 to 1988, during the height of Guatemala’s internal armed conflict.

The announcement, made one week before the inauguration of the new Guatemalan President, Jimmy Morales, placed pressure on the incoming administration even before it had officially begun. Morales’s party, the National Convergence Front (FCN-Nation), has close, well-documented ties to the military, including to some of the officers charged.

Most importantly, current FCN-Nation Congressional Deputy and retired coronel, Edgar Justino Ovalle Maldonado, Morales’ right-hand man, is implicated in the case, but is currently protected by congressional immunity due of his election to Congress in September 2015. As part of the case, the Guatemalan Public Ministry has initiated impeachment proceedings against him. If the impeachment is successful, Ovalle Maldonado faces potential prosecution for war crimes alongside the other retired officials. This is possible due to Article 8 of the 1996 Reconciliation Law, which strips amnesty from officials accused of genocide, torture, or forced disappearance.

Both Ovalle Maldonado and President Morales have remained silent about the case.

The charges have generated intense conflict in the new administration. A week after the Public Ministry’s announcement, Guatemala’s Minister of Defense, Division General Williams Agberto Mansilla Fernández, and his second-in-command, Brigadier General Alfredo Sosa Díaz, countered the charges by filing an action in Guatemala’s Constitutional Court to remove Article 8 from the National Reconciliation Law entirely. The Constitutional Court determined that it would not suspend the article. President Morales moved to find a replacement for Sosa Díaz and filed to impeach Mansilla.

The case against the former military officials arises from the campaign of forced disappearances that heavily impacted both rural and urban areas of Guatemala during the country’s 36-year-long civil war. According to the United Nations-backed Guatemalan Truth Commission, by the end of the war, nearly 45,000 people were disappeared and more than 200,000 killed.

Other officials facing prosecution include General Benedicto Lucas García, head of the army during the administration of his brother Fernando Romeo Lucas García; General Manuel Antonio Callejas y Callejas, head of army intelligence in the early 1980s; Edgar Rolando Hernández Méndez, former commanding officer of Military Zone 21 (now the Regional Training Center for Peacekeeping Operations, or CREOMPAZ); and Ismael Segura Abularach, another military official once stationed at the same base. Twelve of the eighteen officials facing prosecution are graduates of the infamous U.S. Army School of the Americas.

The charges are based on two cases, which the Guatemalan Public Ministry has been investigating for at least three years. The first case names four officers, including Manuel Antonio Callejas y Callejas, and is related to the 1982 forced disappearance of Marco Antonio Molina Theissen, a 14-year-old boy from Guatemala City.

The second case, against the other 14 officials, is related to operations at Military Zone 21/CREOMPAZ, located in the departmental capital of Alta Verapaz, Cobán. Thelma Aldana, Guatemala’s top prosecutor, calls the events at Military Zone 21/CREOMPAZ “one of the largest cases of forced disappearances in Latin America." In 2012, forensic anthropologists began to excavate clandestine graves at CREOMPAZ— they uncovered 558 remains, 92 of which have been identified.

Each of the nearly quarter-million people killed or kidnapped in the conflict has a story. The Guatemalan Truth Commission’s report, Memory of Silence, documents some of these accounts. For example, according to military records and Memory of Silence, on June 2, 1982, soldiers forced Baldomero Chiquin, a 16 year-old Mayan Q’eqchi from Pambach, Alta Verapaz, into a local schoolhouse with other members of his community. They were held there for three hours before soldiers hauled Chiquin — and 69 other men – away. The military told the community’s women that the men were being taken to serve in the army. They were not seen alive again.

In 2013, the Forensic Anthropology Foundation of Guatemala used DNA testing to identify Chiquin’s remains in a mass grave at the Military Zone 21/CREOMPAZ base, his hands and feet still tied together. President Morales’ top advisor, Colonel Ovalle Maldonado, was the commanding officer at the base when Chiquin was taken.

Chiquin’s story is just one of thousands such stories in Guatemala, and although the officers on trial are not being prosecuted for each individual crime, the charges they face are representative of the state-sponsored terror that was unleashed on the people of the Central American country during the most violent period of the country’s long armed conflict. The military waged a dirty war on activists, leftists, campesinos, intellectuals, students, religious leaders, professionals and guerrillas alike; the campaign was directed against anyone the state deemed an “internal enemy.”

“For decades, Guatemalan society has been afraid to talk about the disappearances of their family members,” said Solomán Estrada, of the Foundation Amancio Samuel Villatoro and director of the Museum of Martyrs in Guatemala City. Estrada’s brother was disappeared in 1984. “We hope that through these prosecutions we are able to close this circle of pain for the families of the 45,000 people who were disappeared by the military.”

Just days after the Public Ministry announced the officials’ arrests, Captain Byron Lima Oliva — who is currently serving a prison sentence for the 1998 assassination of Father Juan José Gerardi Condenera — called on the family members and supporters of the military to “defend their rights” and to rally for the officials’ release. The military’s supporters accuse the Public Ministry of trying to divide Guatemala and have called on the ministry to prosecute former guerrillas.

“We are not trying to divide Guatemala,” Estrada maintains. “We just want to see justice for the campaign that disappeared our loved ones.”

Jeff Abbott is an independent journalist currently based out of Guatemala. He has covered human rights and social moments in Central America and Mexico. His work has appeared at VICE News, Truthout, and Upside Down World. Follow him on twitter @palabrasdeabajo.