In Nicaragua, the Latest Zombie Megaproject

The Interoceanic Grand Canal is a threat to the environment and to the Nicaraguan people. 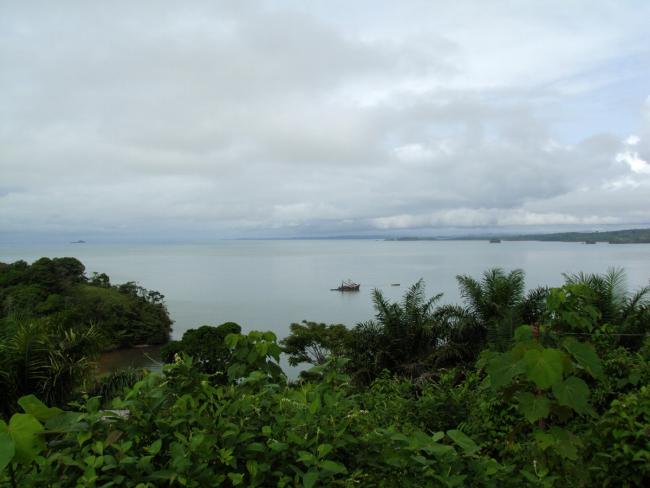 Most recent media coverage on Nicaragua’s Interoceanic Grand Canal conveys a good deal of skepticism about the project’s viability. Since the Nicaraguan state granted rights to build and operate the canal to a Chinese corporation in 2013, the project has become the centerpiece of Sandinista development policy for this economically impoverished nation. One of the world’s largest infrastructure projects to date, the canal comes with a $50 billon price tag and a host of environmental and social costs that have provoked wide ranging opposition.

The president of Nicaragua, Daniel Ortega, promises the canal will “combat poverty, extreme poverty, and bring wellbeing, prosperity, and happiness to the Nicaraguan people.” But shipping experts question the demand for and economic feasibility of the canal. Meanwhile, environmentalists are concerned about the project’s impact on a nation suffering severe drought and deforestation. Indigenous and Afro-descendant peoples have denounced the state’s failure to gain free, prior, and informed consent for the development of a canal on their land. And mestizo campesino/a leaders have mobilized mass protests against the canal and condemned the state’s use of force to suppress popular resistance.

“Megaprojects often come draped in a politics of mistrust,” observe Flyvbjerg, Bruzelius, and Rothengatter in their book Megaprojects and Risk: An Anatomy of Ambition. They are by definition risky, complex, conflict-ridden endeavors. It should be no surprise then that most proposed megaprojects never come to fruition.  Why then, is there so much concern about a canal that seems bound to fail? For those directly affected by canal construction, the doubts of commentators provide little solace. For those of us who are concerned about social justice in Latin America, we might see this project as a harbinger of things to come and as impetus to mobilize for something better. In an era of deregulation, concentration of wealth, and offshore tax havens, predatory capital now has the upper hand and is shaping our future in frightening ways. Whether they are built or not, megaprojects are a sign of the times.

As early as the 1980s, policymakers and development institutions had begun to admit that “economically questionable megaprojects with devastating social and environmental costs” were a bad idea, according to Jonathan Fox and David Brown in The Struggle for Accountability: The World Bank, NGOs, and Grassroots Movements. Yet like a zombie rising from the dead, this bad idea seems fated to return again and again. As big business pursues untapped markets and exploitable resources, states in league with capital continue to promote these projects as a means to combat poverty and develop national economies. And in an era of infrastructure development in Latin America, megaprojects themselves have become zombies, as one after the other is proposed, approved by the state, eventually killed due to lack of feasibility or popular resistance, only to return from the grave to terrorize local populations with the specter of dispossession once again.

This reflects a global trend with dire consequences for the environment. New “climate-killing megaprojects” keep emerging, environmental activist Bill McKibben writes, despite dangerous warming patterns and growing opposition to fossil fuel dependency. The shipping industry is a major culprit of global warming, and its share of greenhouse gas emissions are only projected to grow in coming decades. A Nicaraguan canal would encourage this trend long into the future. The environmental impacts of a canal on the ground are similarly bleak. Biological scientists warn that construction will consume large tracts of forest and wetlands and result in the pollution and sedimentation of Lake Nicaragua and coastal marine ecosystems, as well as the destruction of artisanal fishing economies and diverse habitats for endangered species like jaguars, Baird’s tapirs, Geoffroy’s spider monkeys, and green sea turtles.

The upsurge in large infrastructure projects such as hydroelectric dams and highways alongside the intensification of extractive industries and agribusiness signal the expansion of predatory capitalism into some of the most culturally diverse and ecologically rich regions of Latin America. Many communities now live in a state of siege as they grapple with the cumulative impact of megaproject proposals, land colonization, deforestation, militarization, and the violence that inevitably follows. A recent report by Global Witness found that, in 2014 alone, 116 activists were killed for challenging megaprojects and extractive industries in Latin America. Forty percent of the victims were indigenous. In Honduras, the assassination of Lenca leader and Goldman Environmental Prize winner Berta Cáceres in March 2016 represents the latest episode in this bloody assault on activists.

For Nicaraguans living in the path of the canal, this proposal and others like it have brought insecurity, conflict, and fear. The threat of megaproject development in the Rama-Kriol Territory on the southern Caribbean coast of Nicaragua has shaped indigenous and Afro-descendant mobilization for territorial rights for nearly two decades. The harbor at the Afro-descendant community of Monkey Point was the favored terminus for high-speed railway or “dry canal” proposals under neoliberal administrations in the late 1990s and early 2000s. These initiatives were resurrected in the 2010s by the Sandinista state in the form of the Interoceanic Grand Canal, a 272-kilometer long “wet canal” that would bisect the southern part of Nicaragua, crossing the great Lake Nicaragua, the country’s largest drinking water reserve. The Caribbean terminus for the current proposal would displace the indigenous Rama community of Bangkukuk Taik, just to the south of Monkey Point, where the last population of Rama speakers resides.

The concession that authorizes the project, Law 840, also green lights a series of subprojects such as tourist resorts, a free trade zone, an international airport, and a petroleum pipeline that could transform the country into a commercial hub for Chinese capital. Many Nicaraguans who question the canal’s viability, like human rights lawyer Maria Luisa Acosta, suggest that Law 840 represents the real long-term threat to indigenous and Afro-descendant territories and campesino communities. “One of the biggest problems with the law is that even if the canal and its subprojects are not built, it provides great power to the concessionaire,” she said, “including the power to transfer the concession to a third party, which will have the authority to expropriate land and build infrastructure in the country for the next 100 years.”

For the communities at Monkey Point and Bangkukuk, there is something new and frightening about this canal concession, perhaps due to its enormous scale and the unprecedented power it grants to foreign capital. But it also provokes a familiar sense of precarity that has become a central facet of their existence since the 1990s. This is the on-the-ground impact of the zombie megaproject. For affected communities, serial megaprojects result in a kind of haunting or a state of existential uncertainty that is punctuated by the threat of total dispossession each time a new proposal emerges. More creeping forms of dispossession such as land colonization and deforestation, which communities in the Rama-Kriol Territory seem relatively powerless to halt, augment this insecurity.

Monkey Point leader Allen Clair Duncan highlighted this sense of precariousness when he described the canal as both fantasy and threat. “The president has a dream, and the dream is to make a canal through Nicaragua. But, by all accounts, he’s dreaming because this canal is not a reality,” he said. “The canal comes to destroy what is culture, the way of being for people from the community, and your tradition. Take away your language, take the people and separate them. So we say that this is a threat for us.”

Although these communities secured legal title to their territory in 2009 and their rights to land and self-determination are backed by a growing corpus of national and international laws, their tenure remains insecure. In response, they have appealed to the Inter-American Commission on Human Rights to protest the state’s failure to obtain free, prior, and informed consent for the canal project. “Our struggle is to see that the right for the communities prevails,” Clair said. “To get the government to reason a little bit and to get the President to wake up from out of that dream to see that this is not something that will be positive for the people from Nicaragua and for the people from the Rama-Kriol Territory.” 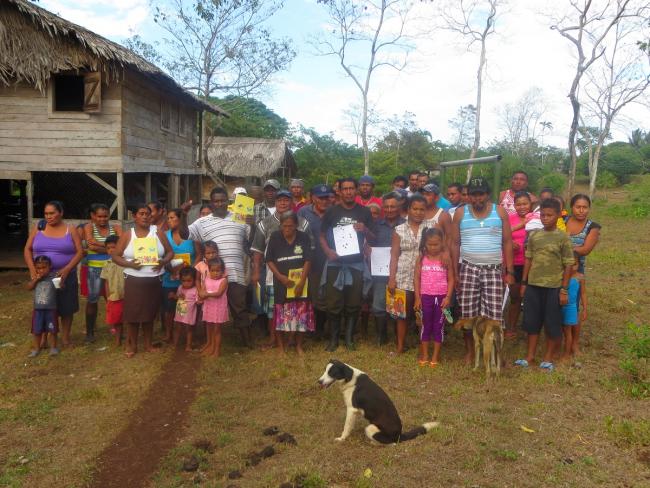 Still, activists from the region say that government officials are working to depose communal governments, divide communities, and pressure and coopt leaders in an effort to promote their goals and counter local resistance. In May 2016, the state attempted to finalize a consent agreement with the territory that outlines the use of 263 square kilometers of land for canal development. Leaders from the territory have denounced the agreement, which they say was the product of subterfuge and “done without having carried out a consultation process in accordance with the minimum standards of good faith required under national and international law.” 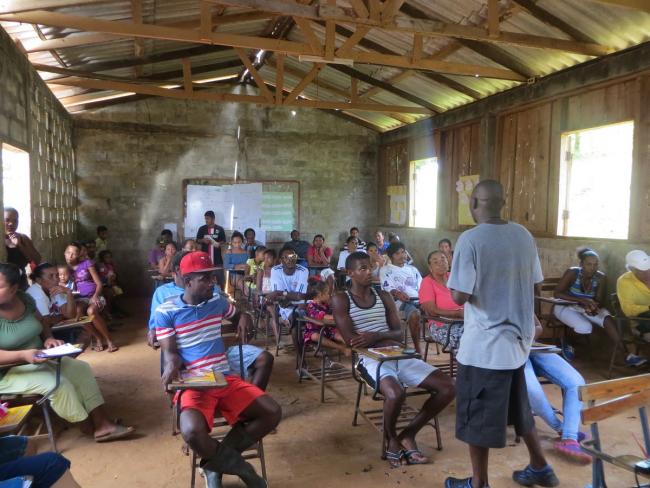 Thirty-five years ago many communities in the Rama-Kriol Territory were depopulated due to the U.S.-backed contra war. After the violence subsided, people returned to their land and began to rebuild their lives. Today they are again faced with an uncertain future conditioned by predatory capital, downsized democracy, and human rights abuses. Referencing a host of other megaproject proposals to emerge in the last decade, Nicaraguan sociologist Óscar René Vargas has observed, “All of those megaprojects went up in smoke, like the story of the smoke seller who was walking from town to town peddling the illusion of a big change in exchange for people’s most precious jewels.” As state representatives and capitalist interests attempt to entice us with an unsustainable development fantasy, Nicaraguans are mobilizing to protect their most precious resources—communities, land, water, and forests—in pursuit of a more livable and just future.

Jennifer Goett is a cultural anthropologist and Assistant Professor of Comparative Cultures and Politics at Michigan State University. She has published in American Ethnologist and the Journal of Latin American and Caribbean Anthropology. Her book, Black Autonomy: Race, Gender, and Afro-Nicaraguan Activism, is forthcoming in November 2016 from Stanford University Press.