Looking for a Left Turn in Mexico

Can Andrés Manuel López Obrador and MORENA unite the Mexican Left and forge a citizens’ revolution ahead of the 2018 presidential election? 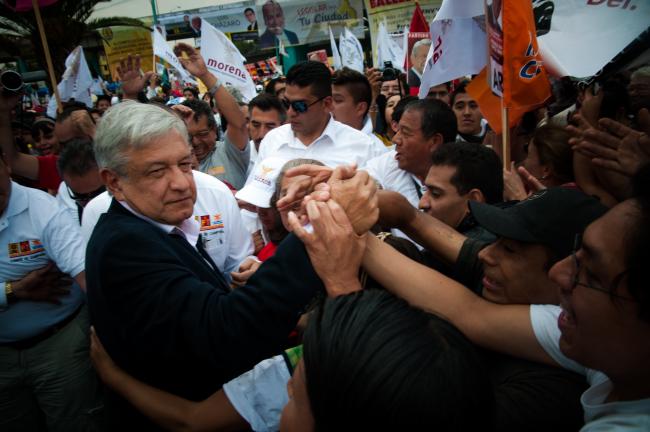 On February 12th of this year, Andrés Manuel López Obrador, leader of the new Movimiento de Regeneración Nacional (Movement for National Regeneration, MORENA) spoke to hundreds of followers at the historic Plaza Olvera in downtown Los Angeles. The reverence he evokes among his followers was on full display at the event; some people reported they drove hundreds of miles with their children so they could listen to AMLO, as he is popularly known. His visit to Los Angeles marked an opening gambit in what, by all accounts, will be a hard fought contest to determine Mexico’s next president on July 1, 2018.

López Obrador’s visit to Los Angeles underscores that preparations for the Mexican presidential elections are clearly underway. The former head of the government of Mexico City (2000-2005) and presidential candidate in 2006 and 2012 leads a crowded list of contenders who are testing the electoral waters.  Other potential presidential candidates who have surfaced include Margarita Zavala Gómez, wife of former president Felipe Calderón (2006-2012), Ricardo Anaya Cortés, the president of the Partido Acción Nacional (Party of National Action, PAN), Miguel Ángel Mancera, the current head of the Mexico City government, Miguel Ángel Osorio Chong, the minister of interior in the present government of Enrique Peña Nieto (EPN), and Jaime Rodríguez “El Bronco” Calderón, a so-called independent governor of the northern state of Nuevo León. For its part, the Congreso Nacional Indígena (National Indigenous Congress, CNI) and its allies have indicated that they will run a yet to be determined Indigenous woman for president.

During the 1990s and 2000s, as the Left made important inroads in Latin America, Mexico stood out as an exception. The Partido Revolucionario Institucional (Institutional Revolutionary Party, PRI) that ruled Mexico for most of the twentieth century lost power in 2000 to the PAN but little changed. Instead, under the PAN and the PRI, economic and social conditions in Mexico actually worsened. The parties in power manipulated the war of drugs to criminalize protest while failing to counter the poverty that fueled the violent drug industry.

The 2017–2018 period, however, will not be a typical presidential election cycle in Mexico. Most Mexicans are troubled about the unprecedented political and economic crisis that currently engulfs their nation. The Peña Nieto government’s announcement in January 2017 that it would break its promise and increase the price of gasoline by 20 percent precipitated a wave of national protest that has reverberated throughout the country. Political parties have been largely sidelined in the recent demonstrations. Protests, common to Mexico’s more densely populated center and south, have spread throughout the entire country, even reaching northern states such as Chihuahua, Sonora, and Baja California where protesters in Ciudad Juárez and Tijuana have shut down the international border with the U.S. on numerous occasions.

For millions of Mexicans, the gasoline increase became the proverbial straw that broke the camel’s back. It fueled outrage not only over the price of gasoline, but also over repeated cases of corruption that have plagued the EPN administration. These include the president’s luxurious and now-infamous Casa Blanca (White House), as well as the lavish properties owned by several of his cabinet ministers. The allegations of influence peddling between the EPN administration and the construction company Grupo Higa have further fueled ire. Repeated scandals concerning PRI governors, particularly the case of Javier Duarte of Veracruz, who stands accused of robbing millions and was allowed to flee, enraged Mexicans. Efforts to censor journalists, such as Carmen Aristegui, and deadly violence used against other reporters, raise concerns about freedom of the press. An expanding series of atrocities committed and abetted by the military around the country include the disappearances at Ayotzinapa and the killings of civilians at Tlatlaya, Apatzingán, Villa Purificación, Ostula, Tanhuanto, and Nochxitlán. This geography of bloodshed stands as a testament to the failure of the U.S.-inspired war on drugs and the corruption of key institutions of the Mexican state.

The election of Donald Trump in the U.S. adds a new dimension to the crisis in Mexico. The demand that Mexico pay for an unwanted border wall, proposals to renegotiate NAFTA, a threatened 20 percent tariff on Mexican goods, and increased deportations of Mexicans have made it clear that Trump seeks to upend traditional relations with the United States’ southern neighbor. Peña Nieto’s tepid response to a paradigm shift in relations between Mexico and the U.S. has further eroded his support, and his popularity in polls nears single digits. Mexico faces a profound institutional crisis where the legitimacy of all the parties—the PRI, the PAN, and the Partido de la Revolución Democrática (Party of the Democratic Revolution, PRD)—that signed the Pacto de México (Pact of Mexico) to open up the energy and other sectors are blamed for the current crisis. As a result, the candidates who seek the presidency in Mexico are jockeying to distance themselves from their own parties and from the current crisis.

What distinguishes AMLO from other candidates in the race to become Mexico’s next president? Mexicans are very familiar with him; one poll indicated that he enjoys over 90 percent name recognition the country. A native of Tabasco, AMLO cut his political teeth in the PRI, becoming president of the party in his home state. In 1988, he joined the left faction of the PRI led by Cuauhtémoc Cárdenas, which subsequently evolved into the PRD. In 1994, López Obrador ran for governor of Tabasco, losing against a PRI candidate who spent exorbitant amounts of money in the campaign. Between 1996 and 1999, he served as president of the PRD, overseeing the expansion of the party. In 2000, he was elected head of the government of Mexico City—a post he held until 2005. During AMLO’s tenure, he promoted social programs, including access to school supplies, health services, and food subsidies for seniors. Between 2004 and 2005, fearing his rising popularity, political elites claimed he failed to execute a judicial order and sought to have him found ineligible to run for office. The move had the opposite effect and thrust López Obrador further into the national limelight. As the 2006 election cycle unfolded, he emerged as the leading contender in that year’s presidential contest.

Critics, from both the political left and the right attack López Obrador, accusing him of being a populist and an authoritarian unwilling to accept criticism. Some on the left accused the PRD of becoming a refuge for former Priistas and Panistas seeking to relaunch their careers. In addition, activists have criticized the PRD for having become a traditional electoral machine, abandoning the social movements that helped propel the party. Mainstream critics took another approach. In 2006, television ads portrayed AMLO as the Hugo Chávez of Mexico. Business sectors played to these fears, suggesting workers would lose jobs if he won.

By the slimmest margin in Mexican history, 0.58 percent, the historically corrupt Federal Election Institute (IFE) declared Felipe Calderón of the PAN the victor of the 2006 presidential contest. The PRD and its allies alleged fraud and asked for a complete recount. The IFE refused and only recounted a handful of districts, ensuring Calderón’s victory. López Obrador and his followers staged massive protests in Mexico City, blocking major avenues and disrupting everyday life for the general public. These actions, and AMLO’s proclamation as the legitimate president with a shadow cabinet, generated further political controversy.

The 2012 elections pitted AMLO against a reenergized PRI and its telegenic candidate Peña Nieto, the governor of the state of Mexico. A network of PRI governors, a coalition of business interests, and the Mexican media duopolies Televisa and TV Azteca supported EPN. Documents obtained by the Guardian newspaper revealed that Televisa “established and financed a campaign” to ensure that EPN won the presidential election.

Even his wedding to television soap opera star Angélica Rivera, “La Gaviota,” was broadcast on national television. In addition to the media, the PRI relied on its extensive network of patronage and graft to swing the election. Critics accused the PRI of offering poor voters prepaid grocery stores and cell phone cards in exchange for votes.

So what has changed in the upcoming presidential cycle?  Since its founding, serious divisions have existed within the PRD. By 2012, such fissures had become undeniable, and López Obrador, along with others from the party, moved to create MORENA. In 2014, it obtained its registry as an official party making important inroads in several elections and becoming the fourth most important party in the country.

Criticisms made of the PRD continue to be leveled at MORENA with some asking if the party is simply a vehicle to elect López Obrador. Others have questioned the party’s decision to accept discredited politicians from other parties or wondered if López Obrador has decided to make peace with the Mexican business sector and convince them that he does not represent a threat.

At present, it seems that if MORENA approaches the 2018 election as simply another electoral contest, the likelihood is that it will lose. To succeed it must mobilize Mexicans from all walks of life, incorporate existing social movements, channel the current discontent, and put forth a new vision of the nation that breaks with the current political model. If not, it will be very difficult to defeat the entrenched power of the political and economic classes that support the PRI and the PAN.

To change Mexico, an entire system of corruption, impunity, and privilege must be dismantled. This herculean task will take more than the election of one charismatic individual. Such profound change will take a citizen’s revolution to remake the state to serve the interests of all.

Miguel Tinker Salas is professor of Latin American History at Pomona College in Claremont, California. His research interests center on the history of contemporary Venezuela and Mexico. His books include Venezuela: What Everyone Needs to Know, The Enduring Legacy: Oil, Culture and Society in Venezuela, and In the Shadow of the Eagles: Sonora and the Transformation of the Border during the Porfiriato. Follow him on Twitter @mtinkersalas.