Trump and Santos at the White House

As protests in Colombia rage on, President Trump’s meeting with Colombian President Juan Manuel Santos could point towards a deepening of militarized drug war policies over investing in Colombia's peace process.

On Thursday May 18th, President Trump and Juan Manuel Santos, the President of Colombia, met at the White House. They exchanged simplified talking points about the rise of coca production in Colombia and the crisis in Venezuela, ignoring issues of greater strife presently occurring in the country as well as the potential challenges facing Colombia’s peace accords. In fact, President Trump hardly mentioned Colombia’s peace accords, ratified by a congressional vote on November 30th, 2016 after its initial referendum loss by a razor-thin margin.

Though Trump has not rescinded U.S. support for the peace agreement, as many have feared, it is clear that socioeconomic or humanitarian concerns related to the peace process are not on his radar. He mentioned the peace agreement only once, when directly questioned about it. He waffled, commending Santos for his “magnificent effort” at crafting peace while avoiding making any significant stance.

Instead, the majority of his comments focused on coca production and the drug trade, highlighting a lack of understanding of the structural complexities that perpetuate violence in Colombia. In a joint press conference, Trump stated that “no area is really more important in terms of cooperation than our joint effort to end the terrible drug crimes that plague both of our countries.” His comments reflected an ongoing adherence to the supply-side eradication efforts that have consistently failed to reduce drug production.

Santos’ “magnificent efforts” at crafting peace have faced a number of challenges since the ratification of the peace agreement. In February 2017, the FARC began moving into 26 demobilization camps across the country. These camps, or veredas, are registering guerillas, collecting their weapons, and providing classes to help them integrate into civilian society. However, upon arrival, many guerillas found these camps unfinished, raising concerns about the state’s ability to follow through on implementing peace. Guerillas began relinquishing their weapons in March with a disarmament completion date of mid-June. (This date has been pushed back an additional 20 days due to earlier delays.) However, as the FARC have moved into the veredas, violence in territories they previously held has increased as competing criminal enterprises vie for control over the land.

Meanwhile, Colombia’s Congress has been slowly reviewing legislation to implement the accords. In March, legislators altered language in a bill specifying mechanisms for transitional justice throughout the peace process. Many organizations fear that this new language could facilitate increased impunity for state forces, civilians, and individuals who commanded or organized troops alleged to have committed war crimes. Moreover, a recent Constitutional Court ruling overthrows fast-track procedures for the accords, meaning that each law must be reviewed and voted on individually and that any changes require full government approval. Critics argue that this will slow the implementation of the accords, and simultaneously create more space for political interference from those who do not support the accords. However, in May, Colombia’s Congress ratified a law that enables the FARC to participate in politics. Under this law, the FARC are guaranteed at least five seats in the Senate and the House.

These uneven efforts at crafting peace are underscored by the 51 activists who have been murdered just this year in Colombia and the renewed paramilitary threats against “all human rights organizations, unions, land activists, defenders of FARC and ELN prisoners, those who do reports on human rights, members of political organizations of the FARC, the Congress of the people, Patriotic Union [Unión Patriótica, a leftist political party]… and Patriotic March [Marcha Patriótica, a social and political organization].”

Meanwhile, as President Santos sat with Trump in the oval office, an estimated half a million people were on strike across Colombia. protesting the government’s failure to address rampant poverty and violence, and the need for access to healthcare, decent housing, potable water, and greater investments in education. In May, civic strikes began in Chocó and Buenaventura, while in Bogotá, Medellín, and Calí, thousands of teachers marched in the streets to demand an increase in educational spending. In Buenaventura, aerial photos show a sea of bodies brandishing signs. But on May 19, a day after President Trump commended President Santos on his success with the accords, Colombia’s anti-riot police force (the Mobile Antidisturbance Squad, or ESMAD) arrived in Buenaventura, attacking protesters in the majority Afro-Colombian and Indigenous community with tear gas and physical force. Though mobilizations in Chocó concluded on May 27th, when protesters reached an agreement with the National Government Convention, protests still continue in Buenaventura, and are being met with undue force.

Though targeting different causes of discontent throughout the country, each of these marches highlight the state’s failure to provide basic necessities for its people, including sanitation services, employment, and education. Moreover, the protests demonstrate that, to achieve real peace in Colombia, the government, supported by the U.S., must go beyond demobilization of armed groups, and also address the economic and social violence its own policies produce daily.

Though U.S. policy may seem disconnected from these protests, tear gas and rubber bullet canisters collected from ESMAD confrontations with protesters in Buenaventura are inscribed with the insignia of the U.S. company Combined Systems, Inc. In 2017, the U.S. has allocated funds to ESMAD under the Department of Defense and the State Department. As aid to ESMAD funds these abuses, the U.S. also—paradoxically— has allocated $20 million to assist Afro-Colombian and Indigenous communities. 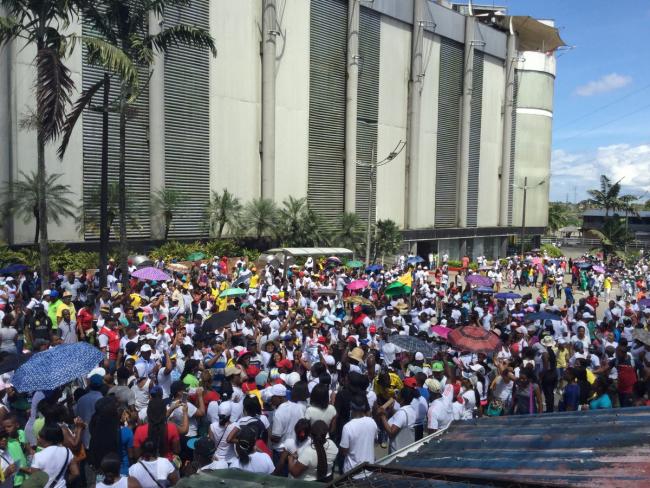 The failure to mention these protests, as well as the Colombian government’s role in creating them, from President Trump and President Santos’ talk and public press conference is indicative of the problematic relationship between the United States and Colombia. .The discussion, combined with other actions by the Trump administration warn of a deepening of more militarized U.S. policies in Colombia, which could play a role in sabotaging the success of its peace process.

In addition to a lack of understanding of socioeconomic realities, the importance of the peace process, and the failure of crop-eradication methods in reducing drug supplies, Trump's comments also reflect an intolerance towards potential crop substitution methods, which the Obama administration supported. Despite President Santos’ multiple public statements in support of alternative approaches to militarized counterdrug strategies, he made no comment contesting Trump’s remarks that point towards a more “hard on drugs” framework. Instead, with a white peace dove pinned to his lapel, he boasted about Plan Colombia's success, a U.S. aid package to Colombia that since 2001 has totaled over $10 billion, consisting mostly of military and police aid. Meanwhile, in Colombia, after land-based fumigation techniques resumed in January 2017, coca growers have been organizing against the forceful eradication of their crops and the state’s failure to provide proper substitution mechanisms.

It will be no surprise if U.S. policies towards Colombia reify the hyper-militarized approach of Plan Colombia. Though lauded in military circles and among bipartisan groups in the U.S. congressional establishment, Plan Colombia resulted in massive human rights abuses including the false positives scandal in which the Colombian military, trained and funded by the U.S., killed an estimated 3,000 innocent civilians and dressed them in guerilla combat fatigues in order to boost their kill numbers in exchange for perks. However, despite myriad reports detailing the failures of Plan Colombia, it was used as a model for the Mérida Initiative in Mexico and the Alliance for Prosperity in the northern triangle of Central America. Recent posturing by the Trump administration points towards a deepening of old militarized drug war policies, while ignoring structural factors behind involvement in coca cultivation, drug trafficking, and drug use.

That’s not to mention President Trump’s secret meeting at his Mar-a- Lago estate with former Colombian Presidents Uribe and Pastrana, who have largely led the opposition forces against the peace process in Colombia, arguing it gives too many concessions to the FARC guerillas. It is worth mentioning that under Uribe (2002-2010), Plan Colombia reached its height both in terms of militarized force and scandal. Uribe favors the all-out elimination of the guerrilla groups, rather than a reintegration into society – not to mention a refusal to contend with abuses by the military itself. Some have speculated that Uribe and Pastrana’s meeting was an attempt to sway Trump to oppose the peace accords.

Also in April, Uribe, now a senator in Colombia, sent a letter to U.S. Congress alleging a link between FARC guerillas and the government of Venezuelan President Nicolás Maduro, who the U.S. has repeatedly censured, and claimed that the rise of coca cultivation is entirely attributable to the FARC. Trump’s talking points in the press conference with President Santos eerily resemble the key concerns Uribe underscored in his letter.

At stake is future aid to the country, which remains uncertain. Although $450 million has already been appropriated for fiscal year 2017, Trump’s proposed budget for 2018 adds $52 billion to the military budget with heavy cuts to humanitarian foreign aid. In addition, his proposed 2018 budget slashes aid to Colombia 36% between fiscal years 2017 and 2018. Though it is likely that Congress will make many alterations, the budget does not include any funding for “Peace Colombia,” a program that at the very least symbolized U.S. support for the peace process. The cuts are more severe for economic and humanitarian aid (a drop of 48% between 2017 and 2018) than for military and police aid (a drop of 28%). However, some analysts have suggested that even the lower military and police aid could be easily appropriated through the Department of Defense, (whose budget increased by 9%). Defense Department spending is less transparent and subject to less oversight than aid via the State Department. The administration’s interest in Colombia clearly rejects addressing socio-economic issues for a more militarized approach— an approach we have seen repeatedly fail.

It is unsurprising, then, that Santos’ meeting with Trump reflected ignorance and a revanchist return to militarized policies that run counter to the tenets of Colombia’s peace agreement. It was a meeting of dangerous political posturing that indicates the direction of U.S. policy in Colombia and beyond. It took years for the U.S. to get on board with the peace process in Colombia, even symbolically – and a shift backwards towards remilitarization in the country would undermine the peace process and cost lives. If we are listening to the ongoing protests across Colombia, the rise of coca production is not the current preeminent concern of Colombians, and military force is certainly not the answer.

Chelsey Dyer is a PhD student in anthropology at Vanderbilt University.  Her research focuses on U.S.-Colombia solidarity efforts.