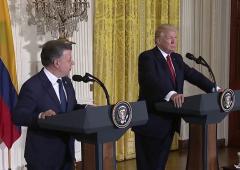 Trump and Santos at the White House

As protests in Colombia rage on, President Trump’s meeting with Colombian President Juan Manuel Santos could point towards a deepening of militarized drug war policies over investing in Colombia's peace process.

Violence and Vulnerability in Buenaventura, the Dark Side of Development

February 24, 2014
On Colombia's Pacific coast, Buenaventura has been host to the worst violence seen in Colombia for years, as the interests of developers, local people, and paramilitary groups collide.

In April, President Obama and Colombian president Juan Manuel Santos reinitiated discussions on establishing a free trade agreement. The agreement is now scheduled to be implemented by the end of the year, and the Colombian port city of Buenaventura will likely be one of the most directly affected places, at a high cost to the local community. This article was originally published in the July/August 2011 issue of the NACLA Report on the Americas.