A friend and colleague of Mexican cartoonist Eduardo "Rius" Del Río, who died last week at the age of 83, remembers his work and prodigious influence on political cartooning. 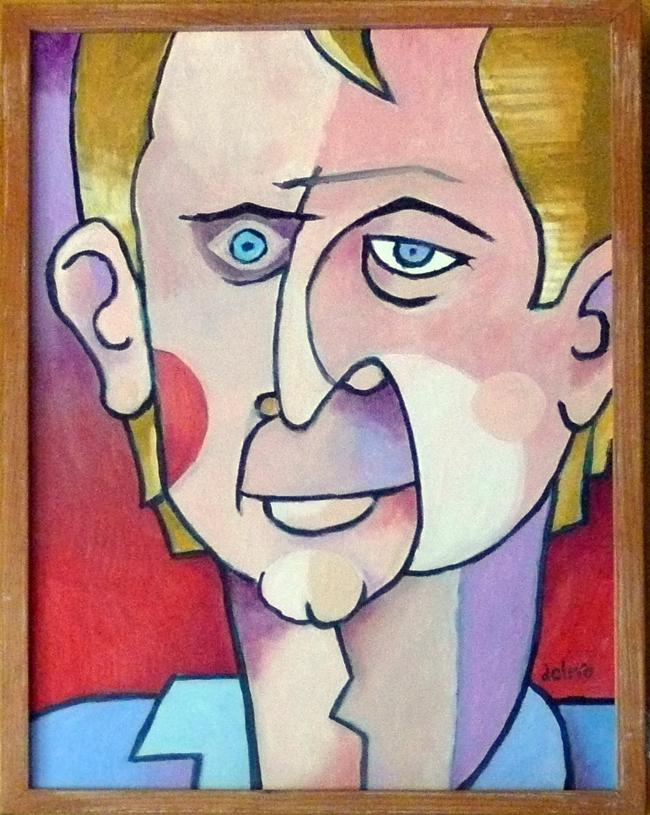 Mexican cartoonist Eduardo Del Río, who worked under the name of Rius, died on August 8 at the age of 83. His death marked the end of an important era in Mexican journalism and in the world of political cartooning. Having published over 100 graphic books of cultural, political and historical analysis, his influence was enormous.

A number of fellow cartoonists and I had the chance to visit him a few weeks before his death at his home in Tepoztlán, a picturesque, largely Indigenous town an hour’s drive from Mexico City, where he had resided for the last several years. He was bedridden, suffering from terminal cancer, and we went with the idea of paying tribute and cheering him up. But he was alert as ever and ended up enthralling us with stories and memories the entire afternoon.

Just a few days after my return to New York, I checked out a book from my local library called Discovering Columbus. A typical Rius production, Discovering Columbus tells the other side of Columbus’ official history, narrating and illustrating his rapacious conquest of the new lands grabbed from the natives. Rius’ narrative portrays him as the perpetrator and initiator of one of the largest genocides in human history. I had read about Columbus before, but Rius' take took me by surprise. In a concise, humorous and simple manner he opened my mind to new interpretations of history, something similar to what I experienced after I read him for the first time some 45 years ago when I was in middle school, with his comic book series “Los Agachados” (The Stooped Ones, a word used in Mexico to refer to those who don’t assert their rights or don’t “rock the boat.” It also refers to the labor performed by migrant farmworkers.)

The issue of Los Agachados I remember best was a behind-the-scenes take on Coca Cola, Mexico’s favorite drink, and how U.S Empire had used this drink along with many other products as another form of colonialism. It blew my innocent mind back then. I thought, “How can this guy say all those things against such a powerful company and with facts and humor!” It felt like the day when you find out Santa doesn’t exist. After that I became an avid reader of his comics and a fan of his cartoons. 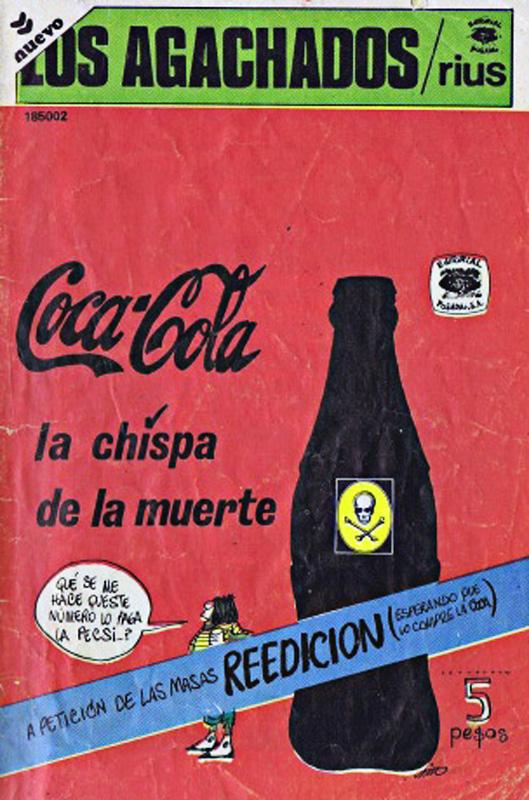 Rius’s books narrate his point of view about diverse themes in a simple manner. Using humor and satire, he criticizes, questions, and even proposes solutions. His work is based on extensive research that he transposes into straightforward text, drawings, collages of clippings and humor. Discovering Columbus, just above 100 pages, cites 21 books and sources, among them the NACLA Report.

Rius contributed to NACLA several times with his drawings and even with a special translated edition of Los Agachados to explain the Chicano movement in 1973. NACLA gave him in 2012 “La Conciencia del Pueblo” award, in recognition for his invaluable work defending the underprivileged, indigenous people, and migrant workers among others.

Eduardo del Río, was born in 1934 in Michoacán, Mexico. His story is a very peculiar one. Who would have imagined that a young disillusioned former seminary student, working later at a funeral home, would end up being an inspiration to millions, and a cornerstone of the freedom the press in Mexico? In the Mexico of the 1960’s and up through the 1980’s (and unfortunately lately once again), to speak your mind was very, very risky.

Early in his formative years, Rius was inspired by the simple and modern style of the Romanian-born Saul Steinberg of The New Yorker magazine and later by Mexican cartoonist Abel Quezada. Rius began drawing gag cartoons in the mid 1950’s while working at that funeral home and through a series of serendipitous opportunities he ended up drawing political cartoons for various newspapers. He was fired many times because of his irreverent and provocative humor, until he finally created in 1965 his own comic book Los Supermachos, which satirized Mexican civil society, its way of life, the political scene, religion, class society, manners and customs. After two years, due largely to government pressure, the Los Supermachos publisher fired him, stole the characters and even the name of the comic he created and began to publish the magazine behind his back, made by a team of hired hands.

On top of that, the government of president Díaz Ordaz — who didn’t like Rius’ popular humor — took offense, and in early 1969, ordered the army to kidnap him. He was dragged to a military base, where he was led to believe he would be executed. He was freed thanks to the intervention of a former president who fortunately was his distant relative, Lázaro Cárdenas del Río, the last decent president Mexico has ever had since Benito Juarez.

This incident didn’t deter him, and Rius created a new comic and titled it “Los Agachados.” The difference this time was that Rius mixed Mexican politics with other topics relevant to our society like consumerism, religion, TV, advertising, food, socialism, sex, China, el Ché, philosophy, medicine, religion, history, education, abortion, gay movement, etc. He covered around 200 different topics during Los Agachados’ existence until 1977. He revived it briefly in 1978 and 1981. Later on, he expanded on those topics through full-length books.

His first one was Cuba for Beginners in 1966 and later Marx for Beginners. These kicked off the For Beginners series, which was widely imitated, translated and copied, sometimes with his permission and many times without it or without proper royalty payments. 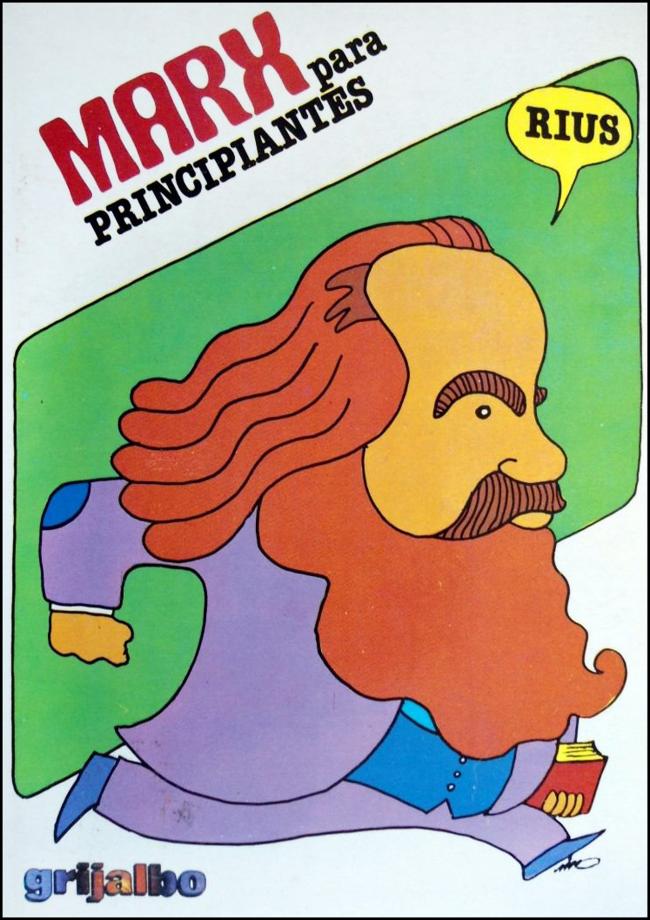 An advocate for socialism, Rius was also very critical of U.S. economic, political and cultural hegemony, its merciless capitalism, obsessive anticommunism, and its interventionism, in particular in Latin America, always using the iconic Uncle Sam figure to convey his critique. He fiercely denounced the ways Mexico’s ruling Institutional Revolutionary Party (PRI) for 75 years, betrayed the social justice goals of the Mexican Revolution and failed the Mexican people with its endemic corruption and lack of democracy for so many years.

He continued to express and defend his point of view until the end of his life. And when he changed it — as he did when he broke with the Cuban Revolution and the Socialist world despite still having faith in socialism — he would explain why he changed his mind in a funny and smart way.

The late great Mexican writer Carlos Monsiváis once remarked that, “Rius opened up a space for democratic critical expression, using comics as political persuasion, breaking the established molds of cartooning. His was a critical vision,” said Monsiváis, “through simple lines and humor, demystifying without being pedagogic but with a didactic value nevertheless. He put to good use a form of popular culture — used to distract until then — to politicize and criticize, something rarely seen in comics in Mexico.”

May he rest in peace in Humor Heaven; the religious one didn't matter to him.

Felipe Galindo “Feggo” is a Mexican-American cartoonist who contributes occasionally to NACLA and who claims that Rius is one of the reasons why he became a cartoonist. Hundreds of colleagues in Latin America claim the same.