As threats to the environment increase across Latin America, new laws and police practices take aim against the front line activists defending their land and resources 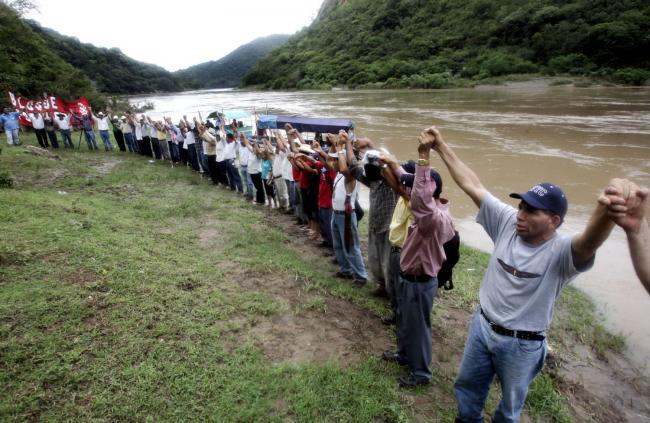 Berta Cáceres, assassinated in her home on March 3, 2016, was just one of hundreds of Latin American environmental activists attacked in recent years. At least 577 environmental human rights defenders (EHRDs) were killed in Latin America between 2010 and 2015—more than in any other region—as documented by Global Witness. But in addition to physical violence, EHRDs face threats and harassment through judicial proceedings, severely impeding their work. Before Cáceres’ murder, she faced trumped-up charges stemming from her leadership in opposition to hydroelectric dams on her indigenous community's territory.

Judicial system harassment attempts to intimidate EHRDs into silence. Such criminalization transforms activism into crime to avoid bloodier tactics that tend to generate greater sympathy and public outcry. Its effectiveness as a tool to silence activists is twofold: not only does it hinder their work because of the time, energy, and financial resources they must dedicate to legal defense but it also stigmatizes and alienates them from support networks.

The most obvious form of criminalization is enforcement of criminal penalties for actions that at most warrant administrative sanction. It can also include limits and restrictions on social protest and individual and collective peaceful resistance; arbitrary detention; specious prosecutions on criminal, civil, or administrative charges; unduly elevated charges; preemptive measures like pretrial detention; lack of due process guarantees; and defamation and stigmatization by public officials.

While non-state actors may be responsible for much of the intimidation and physical attacks that EHRDs face, the use of intelligence and judicial systems to criminalize EHRDs requires direct state participation. Although impunity for crimes by state officials and their non-state accomplices remains high in the region, judicial systems manage to work efficiently against EHRDs, often successfully halting their work, in some cases permanently. And as the Cáceres case demonstrates, when criminalization has not succeeded in silencing EHRDs, antagonists may resort to lethal methods.

The experience of Guatemalan indigenous EHRD Aura Lolita Chávez Ixcaquic, and the patterns she has observed elsewhere, illustrate the complicity of government officials in judicial harassment and smear campaigns. “It has primarily been government officials who have filed complaints against me—governors, mayors, legislators, ministers,” she told me in an interview this May. “They serve at the behest of companies. Of course, the companies themselves are the masterminds, including the multinationals operating through the national oligarchy.”

Why do states participate in such concerted efforts to stop EHRDs? The answer lies in these activists’ ongoing opposition to industrial exploitation of natural resources and usurpation of traditional land tenure systems. EHRDs can be local community leaders and members, indigenous leaders, environmental activists, and others acting to protect land, water, forests, animals, and the territorial rights of local communities to serve as stewards of those resources. They advocate and organize against large-scale mines, oil drilling, hydroelectric dams, biofuel plantations, cattle ranches, new highways and railways, logging operations, and other types of industrial development that states facilitate to advance economic development.

Latin America's 600 indigenous groups are often at the front lines of this conflict over the use and purpose of land and natural resources because many of the region's most sought-after resources lie in their ancestral territories. Nearly every country in the region has ratified International Labor Organization Convention 169, which stipulates that governments consult with indigenous communities that will be affected by proposed industrial development and extractive industry projects, public or private, on their lands. In some cases, national laws enact even more stringent requirements for such consultations. Yet, in practice, such projects tend to run roughshod over the rights and interests of these communities.

Chávez Ixcaquic called this phenomenon “another invasion, through which the macroeconomic and neoliberal model creates laws to open the doors to multinational companies to invade our territories without consulting with or providing information to us.” This neocolonialism relies on racist attitudes against indigenous and other tribal peoples, providing governments and companies with an excuse to behave as though the resources they encounter belong to them, regardless of the inhabitants of the area or the social and environmental consequences. Of course, the United States is no exception, as demonstrated in the violent repression and criminalization of those protesting the construction of the Dakota Access Pipeline through the territory of the Standing Rock Sioux.

When states prioritize business interests over the rights of everyday citizens—particularly the poorest and most marginalized—they tend to see them as obstacles instead of as citizens with needs to be addressed. Indeed, “the triumvirate of power” in Guatemala and other countries in the region, as Chávez Ixcaquic refers to the government, the oligarchy, and international businesses, actively accuse EHRDs of being “trouble-makers, savages, and enemies of development who scare away tourism.”