After decades in limbo, the Trump administration threatens to end Temporary Protected Status (TPS) for over 300,000 immigrants. It’s time instead to grant them citizenship. 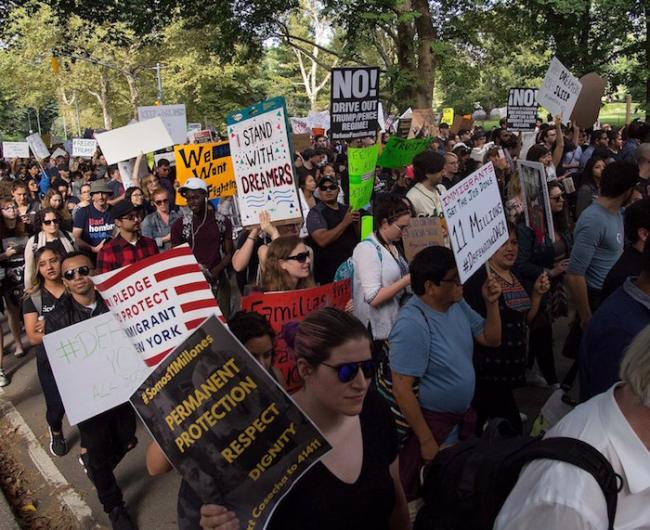 Just a few months into his presidency, the Trump Administration began hinting at plans to end Temporary Protected Status (TPS), a program that protects over 300,000 immigrants fleeing natural disasters or war in other countries from deportation. It seems the administration may well be making good on its promises: last week, Acting Secretary of State Elaine Duke announced the termination of TPS for Nicaraguans in January 2019, affecting 2,500 people, while the State Department recommended the end of the program for some 57,000 Honduran TPS holders. Acting Secretary Duke has extended the program for Hondurans until July of next year, when signs point towards its probable discontinuation. The fate of 58,000 Haitians living in the United States with TPS also hangs in the balance after January 22.

These announcements come on the heels of a series of irrational, cruel, and often questionably legal immigration-related pronouncements, including President Trump’s executive orders barring immigration from entire countries and termination of the successful Deferred Action for Childhood Arrivals (DACA) program.

The administration further targeted immigrants and refugees last week when it abruptly halted the Central American Minors (CAM) program. This program allowed children fleeing violence in El Salvador, Honduras, and Guatemala with family residing in the U.S. to apply for asylum status from their home countries. If approved, these children could travel legally to the United States and avoid the risky journey north—a journey made much more difficult by the militarization of the migrant trail under Mexico’s Southern Border Plan, funded and encouraged by the U.S. government. While critics had pointed out that long wait times and low approval rates limited the effectiveness of the program, there is no question that it saved lives.

The administration’s decisions effectively close down a number of humanitarian options for migrants and refugees, and leave diasporic communities reeling. By ending these programs, TPS recipients become deportable, and highly vulnerable to deportation given that the government has access to their information.

By deporting TPS holders, the U.S. government would harm both immigrants and their communities in both their home countries and the United States. Contrary to what the administration has repeatedly argued about immigrants, these deportations will not make U.S. communities any safer. Instead, it will separate families and disrupt communities and workplaces that depend on them. Deporting long-term residents who have been protected under TPS makes little sense, politically, socially, or economically.

More importantly, given its history of denying justice to Central American asylum seekers, the U.S. has a responsibility for the well-being of these immigrants. Along with reopening the CAM program and ending long-term detention of asylum-seekers from Central America, it is past time to give TPS holders a path to citizenship.

The vast majority of TPS holders—over 260,000—are from El Salvador or Honduras. Hundreds flee the region daily, displaced by a spiral of violence fostered by economic inequality, youth gangs, drug cartels, and their governments’ misguided and abusive approaches to crime. Indeed, it is this violence that spurred the spike in border-crossing by unaccompanied minors in 2014, which led the Obama administration to develop the CAM program. As El Salvador and Honduras confront an exodus of asylum-seekers, it is clear that they simply do not currently have the necessary conditions or resources to reintegrate tens of thousands of deportees. Mass deportation could devastate national economies and cause further violence.

Like other programs blocking the deportation of various categories of immigrants, TPS provides only limited benefits and is often misunderstood or maligned as a form of “amnesty.” To the contrary, it is by definition temporary: recipients must re-register every 18 months, requiring an application that includes biometric data and payment of steep fees. Those who have committed a felony or two or more misdemeanors are not eligible to renew. TPS does not permit holders to apply for immigrant visas for relatives, leading to long-term family separation. Moreover, it blocks holders from key social services, and has often caused confusion and misinformation about work status, preventing some from accessing jobs and other opportunities. Experts have critiqued the status for creating a semi-permanent worker class that is excluded from full political and social recognition. TPS is, in short, no substitute for permanent legal status.

TPS Then and Now

While TPS is framed under the law as a humanitarian response, it has also functioned as a stand-in for refugee status, both today and during Central America’s civil wars and unrest in the 1980s. El Salvador’s civil war (1980-1992) claimed more than 75,000 lives and internally displaced hundreds of thousands. The military employed “scorched earth” tactics, and carried out the largest massacres in the Americas in recent memory. But, employing Cold War logics, the U.S. government allied with the fiercely anti-communist Salvadoran government and military. The U.S. in fact spent $3.5 billion to fund El Salvador’s military and train them in ‘counterinsurgency’ techniques. Truth Commission reports following the war confirmed that the same U.S.-funded state security forces and affiliated death squads bore principal responsibility for the murders, disappearances, and torturing of Salvadoran civilians. The political context meant that the U.S. government granted refugee status to less than 3% of Salvadoran asylum- seekers. The U.S. denied that the state could be sponsoring torture, disappearances, and death squads that terrorized these migrants’ lives, thereby arguing they did not merit refugee status.

Salvadoran residents in the U.S. and their allies in the Sanctuary movement— a movement that brought together religious congregations and activists to advocate for refugee rights—fought back against this discrimination. Through various forms of activism, including legal advocacy, they were able to challenge denied asylum claims and open opportunities for residency. An out-of-court settlement in January 1991 brought forth by the American Baptist Church revealed that the United States had discriminated against Central American asylum applicants. In response, the Immigration and Naturalization Service (INS) had to agree to reconsider the cases in the lawsuit.

However, rather than re-litigate the costly, complex, and often traumatizing process of an asylum claim, most found refuge in other legal remedies. Of these various legal pathways, the most common was Temporary Protected Status. TPS, established in 1990, became an ostensibly apolitical stand-in for those denied asylum. It functioned as a last-ditch opportunity for refugees confronting U.S. intervention in Central America as well as the discrimination and exclusion against asylum seekers in the United States. These nations are still reeling from military and economic destabilization of that era. Ending TPS would undo even the limited positive benefits of U.S. immigration policy available to Central Americans and other TPS holders.

Decades after the establishment of the program, most immigrants with TPS are long-term residents who have fully adapted to their new country and established deep social ties. Hondurans with TPS, for example, must have been continuously present in the country since January 1999 to maintain their TPS status. In some cases, TPS holders may legally apply for advance parole, or permission to travel and return to the United States, but the process is bureaucratically challenging and does not guarantee re-entry. Few TPS holders have traveled to their home countries, meaning they are often unable to maintain ties with their relatives and communities back home—while deepening their roots in the U.S.

Polls have consistently shown that current U.S. citizens believe that long-term unauthorized residents with significant ties to the U.S. should have an opportunity to become citizens. As political ethicist Joseph Carens wrote in 2009, “The state’s right to deport irregular migrants weakens as the migrants become members of society. Over time, an irregular migration status becomes morally irrelevant while the harm it inflicts grows.”

The precarious nature of TPS workers’ permits is already harmful to immigrant families and the communities where they live. It curtails relationships, aspirations, and opportunities. According to a University of Kansas study, TPS holders who have professional skills or credentials are often stuck in low-wage or entry-level positions since employers hesitate to invest in an employee without permanent residency. Moreover, if the violence of the detention and deportation regime is inflicted on TPS holders, the impact on their families will be devastating—especially for their children. The economic, emotional, and social damage caused by such an approach will undermine well-being and opportunities for the next generation of new U.S. citizens.

A crackdown on legally-present immigrants with long residency and strong community ties is not only irrational, but goes against how our immigration system was designed to function—by affording long-term residents the opportunity to permanently legalize a temporary or undocumented status. Historically, immigration law has been mutable, and changes to the law have reflected changing historical conditions and immigrant populations. Unfortunately, now more than ever, we cannot count on political reforms to save TPS.

Today, the Trump administration seems poised to use the TPS program as a political football, part of its radical campaign to restrict and reduce both legal and unauthorized migration pathways to the U.S. Just as in the past, both U.S. and Salvadoran political leaders have callously attempted to leverage the TPS program to their personal advantage. The administration’s efforts on immigration are aimed not only to radically curtail immigration, but also to instill a climate of fear among immigrant communities.

The administration points out that TPS was always meant to be only a temporary measure. Indeed, living for decades under a “temporary” stay of removal is unreasonable and inhumane. These immigrants and their families have suffered from long-term liminality, what some call “permanent temporariness,” that prevents them from making the most of life in the United States.

But deportation is not the best option for ending this dysfunctional permanent temporariness. Instead, the administration should support, and Congress should legislate, a path to citizenship that includes TPS recipients. In the absence of comprehensive reform, a stand-alone bill such as the recently-introduced Extending Status Protection for Eligible Refugees with Established Residency Act of 2017 would provide a rational and just solution.

Immigrants with TPS have proven their resilience over many years, and shown great ingenuity in their evolving resistance to displacement, legal exclusion, and increasing criminalization. In June 2017, TPS holders and allies gathered in Washington, D.C. to create the National TPS Alliance with organizations from around the country. On the National Day of Action, November 15, 2017, their ongoing campaign, #SaveTPS, demands a path to legalization that would recognize the contributions of TPS holders to the United States over decades and acknowledges the responsibility of U.S. interventionist policies for their initial displacement.

Miranda Cady Hallett is Assistant Professor of Cultural Anthropology and Human Rights Research Fellow at the University of Dayton. She received her PhD from Cornell University in 2009. She has published numerous articles on Central American immigration and immigration policy in scholarly journals, including a 2014 article in Law and Social Inquiry about the tensions and contradictions of the TPS program.

Leisy J. Abrego is Assistant Professor of Chicana and Chicano Studies at UCLA and the author of Sacrificing Families: Navigating Laws, Labor and Love Across Borders (Stanford University Press, 2014). She received her PhD from UCLA in 2008. Her research and teaching interests are in Central American immigration, Latina/o families, and the inequalities created by gender and by U.S. immigration policies.