The chaos surrounding last week’s presidential elections in Honduras reflects a rightwing consolidation of power in the country, abetted by the United States. 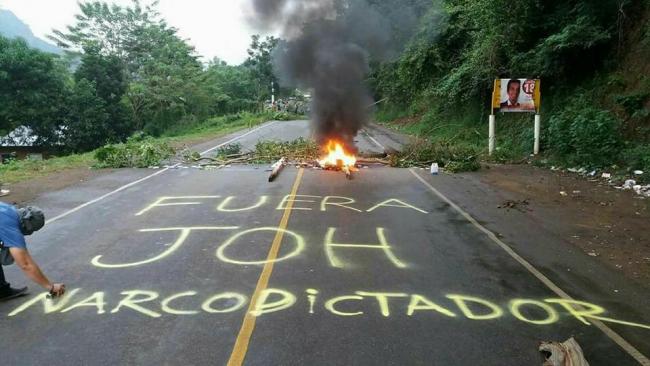 Ten days after Honduras’ presidential elections, results have not been announced and Honduras is in flames. Thousands of demonstrators have been battling gas bombs and bullets in the streets of Tegucigalpa, leaving at least 11 dead. After initially taking the streets, the country’s U.S.-trained and financed armed forces have refused to follow the president’s orders to enforce a hastily imposed curfew. Despite the government’s violence, students and members of various social movements continue to risk their lives demanding democracy, jeopardized by the current regime of president Juan Orlando Hernández of the right-wing National Party. The National Party has been in power since a coup removed former President Manuel Zelaya in 2009.

Zelaya’s ouster—eventually accepted by the Obama administration despite widespread regional condemnation—hinged on his plans to consult the electorate about the possibility of running for a Constitutionally prohibited second term. It is painfully ironic, then, that Honduras’ current president Hernández upended the constitution by appealing to a Supreme Court he had packed to grant him the right to run for reelection, four years after his first election in 2014 was tainted by a scandal that revealed his campaign had stolen funding from national social security accounts.

And yet, against all odds for the firmly entrenched regime, initial electoral returns indicated a seemingly insurmountable advantage for the opposition candidate and political novice Salvador Nasralla, whose political coalition is backed by Zelaya. The Electoral Courts (TSE) were then suspended for 72 hours, and when they resumed releasing results, Hernández was in the lead with a 1% margin. The clear lack of transparency and evidence of vote tampering was too much even for a country with a much weaker Left than most of its regional neighbors. People took to the streets. At this point, a peaceful solution seems less and less likely.

The government has indicated a plan to recount about 1% of votes, the EU and the OAS have called for a recount of all disputed votes, and the opposition is increasingly calling for new elections or at least to review all ballot boxes opened since the TSE’s blackout during the original count.

The events over the last ten days symptomize a growing consolidation of power by a new kind of right-wing alliance in Honduras and across Latin America: an alliance that brings together the power of the traditional landed elites and that of the financial elites who have benefited more recently from globalized neoliberalism. This alliance emerged amid the ashes of the Cold War and the dawn of the Washington Consensus—and can help explain some of the dynamics of the current electoral crisis in Honduras as well as recent events across the region.

At the end of the 1980s, three political and economic shifts opened the path for the rise of a neoliberal elite in Latin America. First, a decade of Central American revolutions and regional debt crises delegitimized both oligarchies and economic nationalism, as political actors seemed incapable of resolving the multiple crises they faced. At the same time, the fall of the Soviet Union removed the ideological threats that had animated the Cold War. This coincided with a new era of U.S. international influence as it turned toward neoliberal globalization policies exemplified by the bipartisan Washington Consensus. In Honduras and across the region, such policies took shape in the removal of trade barriers, privatization of state-owned enterprises, liberalization of banking and services, austere fiscal policies that slashed public programs, and a general removal of the state from economic planning.

Throughout the 1990s, those intent on advancing a neoliberal, globalized regime dominated the region, forming new parties that captured power in places like El Salvador, working through traditional parties in places like Mexico, and handing over the reigns on public policy to technocratic elites in places like Honduras. Neoliberal policies temporarily resolved inflationary crises, but they did little to include long excluded sectors or advance equitable development.

In the 2000s, a wave of Left and Center-Left governments won electoral power by rejecting the Washington Consensus. The U.S. appeared to have no recourse, until Honduras in 2009. Traditional oligarchic interests and newly wealthy elites who had embraced neoliberalism made common cause with an uninterested U.S. embassy to remove a president who threatened a shift to the left. Since the coup, the coalition has brought together traditional oligarchs and neoliberals, with U.S. support.

In Honduras, both old and new elites benefited from the National Party’s ascension to power in 2009. To the benefit of the new neoliberal elite, Honduras has ceded territory to boards of international and local businesspeople with power to set regulations and laws for investment in so-called Charter Cities.  To the benefit of the land-owning oligarchy, clientelist politicians, and the military, Honduras has undertaken large-scale infrastructure projects and mining. The violence inherent in this oligarchic-neoliberal alliance is best exemplified by the 2016 murder of indigenous environmental activist Berta Cáceres. Cáceres was an obstacle to the building of a hydro-electric dam that she and her community opposed. In the wake of her death, a former soldier revealed the Cáceres had appeared on a military “hit list.”

The illegitimate election in Honduras currently taking shape will consolidate the undemocratic alliance between oligarchs and neoliberals across the region. Such a coalition appeared in Haiti in 2004, mounted the 2009 coup in Honduras, staged a 24-hour impeachment in Paraguay in 2012, and removed a president in Brazil in 2016. Similar coalitions have attempted and failed to remove presidents in Venezuela, Bolivia, and Ecuador.

Though events are still unfolding, some lessons are already evident. First, in some places, it appears the oligarchic-neoliberal alliance can win elections and govern, as occurred in 2016 Argentina, and in Chile in 2010 and perhaps again this year. In other places, such alliances can wrest power through undemocratic manipulations or “constitutional coups,” as in Honduras in 2009, Haiti in 2010, Paraguay in 2012, and last year in Brazil. Second, in many places the Left is weak, and only remains in power where oligarchs and neoliberals cannot unite, like El Salvador, Uruguay, Ecuador, Bolivia, Nicaragua, and Venezuela. And these Left forces are not blameless themselves, in some cases tragically treating democratic institutions with the same Machiavellian disdain as the Right, though for different reasons.

Third, the U.S. is influential—but not sufficient—to determine political outcomes in the region. Again and again, the U.S. selectively opposes democratic manipulations when the Left governs, and turns a blind eye when the Right enacts similar machinations. This fails in two ways. First, U.S. support rarely unites neoliberals and oligarchs. Second, acquiescence to and support for anti-democratic manipulations where the Right governs bolsters the exclusionary oligarchic-neoliberal alliance and hollows any U.S. claim to defend democracy elsewhere.

Finally, it is worth considering the Honduran elections in the context of the Trump administration. Throughout the Clinton, Bush, and Obama administrations, the State Department acted to advance its vision of neoliberal globalization and appeared to grudgingly follow along with the oligarchic-neoliberal alliance when it appeared. Now, Trump has hollowed out the State Department and made support for the new rightwing alliance overt.

On Monday, Reuters reported that Honduras will receive its full aid package—parts of which were contingent on the country showing significant progress on certain human rights outcomes—despite its clear failure to do so. Moreover, Trump’s antagonism to free trade and support for militarized extractivism raises the oligarchy to a dominant position in the alliance.

Almost as if by design, this takes us back to Trump’s 1950s idyll of international relations, when U.S.-backed oligarchic elites won elections when possible, overturned them when necessary, and manipulated institutions to ensure their ongoing grasp of power. If history is any indication, such a trend should give us pause. In the ‘60s and early ‘70s, oligarchic-led alliances eventually closed democratic options entirely, enacting long periods of repressive military rule across the hemisphere. The U.S., more fearful of popular sectors than the oligarchs, either supported such dictatorial turns or allowed them to occur. Allowing the alliance between landed oligarchs and neoliberal elites to steal an election in Honduras tragically signals that we are eager to repeat our past mistakes.

Aaron Schneider is Leo Block Associate Professor of International Relations at the University of Denver.

Rafael R. Ioris is Associate Professor of Latin American History and Politics at the University of Denver.