A Genocide and the Pursuit of Justice

Part of a roundtable reflecting on the death and legacy of dictator Ríos Montt. Read the rest here. 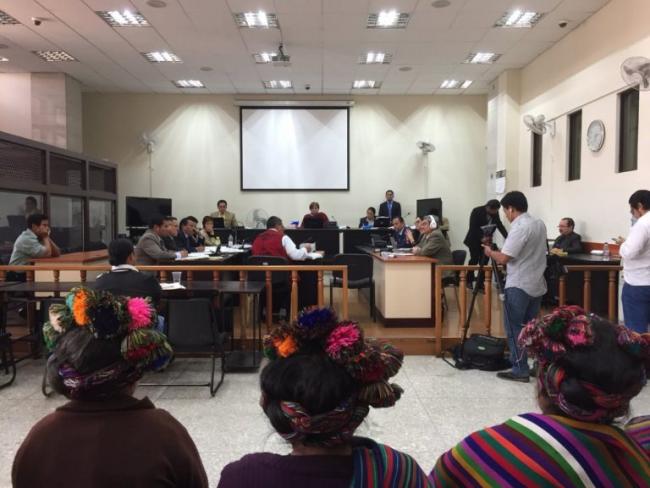 Guatemala’s most notorious dictator, retired army general José Efraín Ríos Montt, died of a heart attack on April 1, 2018 at the age of 91. In 2013, after years evading justice, his victims proved in a court of law that he was guilty of genocide. The judgment was later erased by the action of the Constitutional Court at the bidding of powerful business and military elites who feared they’d be next on the docket. But the genocide trial and the testimonial, documentary, and other evidence it produced are helping rewrite the history of the Guatemalan civil war and to empower other victims of state terrorism to pursue justice.

Though he was in power for only 17 months, between March 23, 1982 and August 7, 1983, Ríos Montt’s government was the most brutal of Guatemala’s 36-year civil war. During the first three months of his regime alone, the military killed an estimated 10,000 people. Between March and December 1982, the country endured an average of 19 massacres per month. Montt’s counter-insurgency policies, originally designed and implemented by his predecessor, Romeo Lucas García (1978-1982), sought to destroy insurgent groups, but were also used to systematically clamp down on Guatemalan social movements that were advocating for change or challenging the military government. And in its zeal to “annihilate” the “internal enemy,” the government’s scorched-earth policies led to the destruction of more than 400 Mayan indigenous communities.

By the time Guatemala signed a peace agreement in 1996, the conflict had left an estimated 200,000 dead, 45,000 forcibly disappeared, countless victims of torture and sexual violence, and tens of thousands forcibly displaced or exiled. According to the United Nations truth commission, 83% of the victims of the conflict were Indigenous. Based on this and other indicators, the commission determined that the Guatemalan state committed “acts of genocide” against the indigenous population in five regions of the country.

The 2013 trial against Ríos Montt and his former military chief, Mauricio Rodríguez Sánchez, was the first time that a former head of state was prosecuted for genocide in a national court, setting a key precedent for international justice. Over 100 survivors and relatives of victims testified in the trial, recounting publicly for the first time the horrors they endured, including massacres, torture, mass rape, and forced displacement. Those who fled into the mountains told harrowing stories of trying to survive amidst relentless military persecution. Many died of starvation, while others said that because of their desperate conditions, they ultimately turned themselves in and were forcibly resettled in villages set up by the army to control the rural population. On May 10, 2013, Ríos Montt was found guilty of crimes against humanity and genocide against the Maya Ixil people and was sentenced to 80 years in prison. His military chief, Rodríguez Sánchez, was acquitted.

Just ten days later, and under intense pressure from business and military elites, Guatemala’s Constitutional Court partially invalidated the proceedings on a technicality and ordered a partial retrial, effectively nullifying the verdict. Ríos Montt was released from military prison and returned to house arrest, while Rodríguez Sánchez was again placed under house arrest. For national and international human rights organizations, the Constitutional Court ruling was illegal and had to be overturned.

Indeed, Ríos Montt and Rodríguez Sánchez could not evade justice. The shadow of the genocide charges continued to haunt Ríos Montt until the day he died. Though the retrial was delayed, it did restart again in late 2017, but Ríos Montt was not obligated to be present in the proceedings because of his dementia diagnosis. Undaunted, the survivors of his genocidal policies testified again, demonstrating their resolve to see justice done. With his death, the case against Ríos Montt has been dismissed, but the proceedings against Rodríguez Sánchez continue.

The delays that characterized the genocide trial illustrate the backroom influence that Guatemalan military elites continue to wield over the country’s judicial and political institutions. Guatemala has been trying to dismantle these kinds of parallel power structures via organisms like the International Commission against Impunity in Guatemala (CICIG), a UN-backed body that works closely with the Attorney General’s Office in investigating high-level corruption cases. Still, given the power that shadowy special interest groups made up of ex-military and intelligence officers continue to wield in Guatemala, the fact that Ríos Montt was put on trial at all was an incredible accomplishment.

For the survivors, who were able to testify publicly about the atrocities they suffered and to confront for the first time their tormentor in a court of law, the trial had meaning far beyond the legal realm. “We approach the struggle for justice on many levels,” Edwin Canil, president of the Association for Justice and Reconciliation, which unites survivors of state-sponsored violence from five Indigenous regions of the country, and himself a genocide survivor, told us after the news of Ríos Montt’s death broke. “The pursuit of justice is just one aspect of our struggle. We are also working to rewrite the history of Guatemala and to make visible the historic violence that has been exercised against Indigenous people.”

“Ríos Montt is dead,” said Canil, “but there are many others who bear responsibility for what happened. We hope that the Attorney General’s Office will move forward on criminal trials against those individuals.”

Ríos Montt will be remembered as one of the 20th century’s most ruthless dictators. Even though the 2013 sentence that convicted him of genocide was technically invalidated, the case showed that it is possible to use witness testimony, documental evidence, forensic evidence, and expert reports, to bring perpetrators of genocide to justice. Ríos Montt will be remembered not as a great political leader or military strategist, but as a perpetrator of genocide who hid behind legions of lawyers to delay, obstruct, and avoid justice, and who ultimately died not a free man, but under house arrest and on trial for the second time for crimes against humanity.

Jo-Marie Burt is Associate Professor at the Schar School of Policy and Government at George Mason University. She is also a senior fellow at the Washington Office on Latin America (WOLA), a research and advocacy organization advancing human rights in Latin America. She specializes in state violence, human rights and transitional justice, with a focus on Peru and Guatemala. She writes about war crimes prosecutions in Guatemala for International Justice Monitor.

Paulo Estrada is a human rights activist and an archaeology student at the University of San Carlos in Guatemala. He was a civil party in a case involving forced disappearances by the Guatemalan state, heard by the Inter-American Court of Human Rights in 2012.