Venezuelan President Nicolás Maduro will likely win Sunday’s elections—not due to fraud, but because of the opposition’s call for a boycott and continued support in Venezuela for the Chavista government. 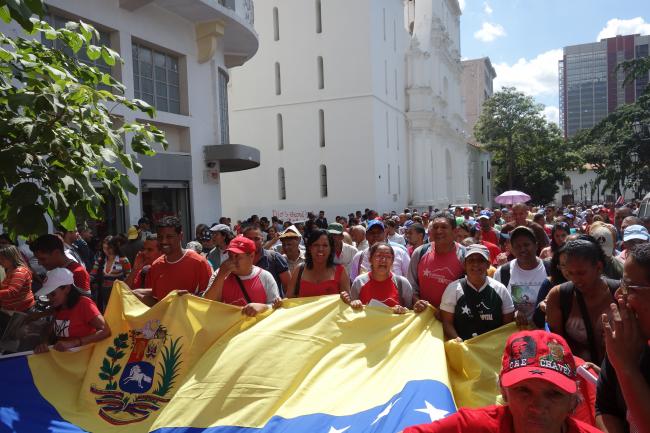 This Sunday, Venezuelans will go to the polls to elect the country’s next president. In the United States, the election has been widely condemned as a sham. While there are good reasons to be highly critical of the election, calling it a sham is a dangerously misleading simplification of a complex and dynamic reality. Most importantly, this stance ignores the very real possibility that the opposition could have won the election, and the fact that this is unlikely to happen not because of government fraud, but due to the hardline opposition’s myopic decision to boycott the election. The sham election narrative is dangerous because it plays into the U.S. government’s and hardline opposition’s longstanding pursuit of (violent) regime change, a ridiculous and illegal strategy that has contributed to Venezuela’s profound woes, as have highly inept government policies.

Before delving into the befuddling and exasperating internal dynamics of Venezuela’s May 20th election, it is important to highlight the international context within which the election takes place. As Alexander Main has detailed in an excellent recent article, both Donald Trump and former Secretary of State, Rex Tillerson, have made recent statements that are supportive of the idea of removing Venezuelan president Nicolás Maduro from office through a military coup. Roger Noriega openly advocated this stance in a recent New York Times editorial. As Main points out, “this is an insane debate to be having.”

It is also worth pointing out that, as has long been the case, Venezuela is being held to a different standard than other countries in Latin America. While the U.S. government, mainstream pundits, and journalists fall over themselves to condemn Venezuela’s “undemocratic” ways, the same outrage is not shown to countries such as Brazil, Honduras, Mexico, and Colombia. In August 2016, Brazil’s democratically elected president, Dilma Rousseff, was removed from office in what observers call a “parliamentary coup.” And just a month ago former Brazilian president Luiz Inácio Lula da Silva was imprisoned on highly dubious charges. At the time of his arrest, Lula had a significant lead in polls for this year’s presidential election. Lula's imprisonment will almost certainly bar him from running. Washington has not only failed to condemn these egregious violations of democratic norms, but has embraced Brazil’s illegitimate president Michel Temer. Other recent examples of the U.S. double standard in Latin America are the recognition of Honduras’ fraudulent November 2017 election and a failure to condemn the recent deaths of dozens of politicians and civic leaders in Mexico and Colombia. Not coincidentally, all four of these countries are generally staunch U.S. allies led by right-wing governments.

All this makes it obvious that the U.S. government’s critique of this election is not rooted in a genuine concern with democracy, human rights, or the wellbeing of Venezuelans. U.S. sanctions against Venezuela and pressure on U.S. and European banks preventing them from extending much-needed loans to Venezuela—and thereby directly exacerbating the country’s crisis—also show this quite clearly.

There is, however, much to criticize about Venezuela’s upcoming election. In a recent New York Times editorial, Javier Corrales, a longtime critic of the Venezuelan government, argues that, “Venezuela has committed at least 10 [pre-election irregularities], including banning candidates and parties, manipulating the electoral calendar to benefit the ruling party, allowing electoral authorities to be partisan, failing to properly update and audit voting registries, making welfare subsidies conditional on voting for the government and threatening to check the identity of voters.”

Evidence supports Corrales’ assertions. In April late year the government banned leading opposition figure Henrique Capriles from participating for politics for 15 years. The government also prohibited several leading opposition parties, including Capriles’ Justice First party, from this year’s election. In contrast to past presidential elections, which have been held in the second half of the year, this year’s election was called for May—and initially for April—a move seemingly made to allow the government to benefit from higher oil prices and/or the opposition’s disarray following poor results in October 2017 gubernatorial elections. Maduro has also offered benefits to holders of a new national identification card, the Carnet de la Patria, who vote on May 20.

These problems are substantial and cannot be brushed away, or considered mere “errors” as Steve Ellner has written. In the July 2017 National Constituent Assembly vote, the National Electoral Council falsely claimed that 8.1 million had voted, when evidence suggests the real figure was around 6.5 million, though this did not change the outcome of the election. And, in a close race in the October 2017 gubernatorial elections, evidence indicates fraud occurred in the state of Bolívar—though this is the only evidence strongly indicating the government committed fraud to change an actual race. Given this, the electoral irregularities that exist in this year’s election are disturbing, indicating the government’s willingness to flout democratic norms in order to stay in power.

If the government were truly committed to revolutionary transformation of society, a claim that had credibility through 2013, such tactics could perhaps be seen as justified by a logic of “the ends justify the means,” a view that is of course subject to critique. It is nearly impossible, however, to see how the Maduro administration could be considered genuinely revolutionary, given that its maintenance of inept policies—most notably Venezuela’s disastrous currency policy—is widely viewed as the leading reason for the country’s current economic debacle, including by leftist economists like Mark Weisbrot, who have been sympathetic to the government for years. Far from being revolutionary, Venezuela’s current government has repeatedly demonstrated its unwillingness and incapacity to even meet its citizens’ basic needs.

This, in fact, is why the current election cannot be considered a mere sham, notwithstanding the severe problems already noted. The profundity of Venezuela’s crisis, and the government’s continuing demonstration that it will not or cannot do what it takes to resolve the crisis, has made this election genuinely competitive. Repeated polls show that the main opposition candidate, Henri Falcón, has a strong chance to win the election. Polls taken in the last week put Falcón up by between 8.5 and 13 points.

Most commentators, however, have assumed that Maduro will win. The implicit, and sometimes explicit, reasoning is that the government will simply commit fraud to do so. I agree with the conclusion that Maduro is highly likely to win on Sunday, but disagree that fraud will secure his victory. There are two main reasons for this. The first is that the hardline opposition has been urging a boycott of the election for months. This has two major consequences. First, Falcón will receive significantly fewer votes than he would have in an election with full participation by opposition supporters. Secondly, the opposition’s boycott will mean that the opposition will not have the same numbers of election observers in place as it has in past elections, such as in the 2015 legislative elections, which the opposition won handily. This will, ironically, make fraud more possible, although the depressed turnout means fraud is unlikely to be needed to secure Maduro’s victory.

The second reason that a Maduro victory is likely is that he retains significant popular support. This fact is difficult for people in the United States to fathom, but evidence shows that it is true. There are a few reasons that can explain this continuing popular support. For one, the Hugo Chávez administration’s policies enabled significant material gains for the popular sectors between 2004 and 2013. The memory of these gains is not easily erased. Relatedly, despite his disastrous handling of Venezuela’s economy, Maduro has maintained a symbolic, and to a lesser extent practical, link to this past. The government’s CLAP program, which distributed badly needed food, is not only a means for pressuring voters, but also a demonstration that the Maduro administration continues to care about the poor and working class in Venezuela.

Meanwhile, the opposition has concentrated most of its energy on criticizing the government for its allegedly dictatorial ways, rather than coming up with concrete solutions to the country’s problems. The opposition has thus repeatedly failed to connect with the Venezuelan populace and has not delivered on promised economic recovery.

Finally, Chavista supporters, to a significant extent, continue to blame the crisis on an “economic war” waged by the U.S. government and the hardline opposition. While evidence indicates that the government bears substantial responsibility for the crisis, the economic war thesis is not entirely false, as discussed above. Nor, it must be said, is the Trump administration doing anything to counter the notion that the U.S. “empire” is implacably opposed to Venezuela’s government.

The U.S. has indicated that it will not recognize the results of Sunday’s election. Amazingly, they have even threatened to sanction Falcón simply for participating in the election. In a similarly hypocritical manner, Canada is refusing to allow Venezuelans living there from voting in the election. All of this means that direct foreign intervention in Venezuela, and ramped up efforts to stimulate a military coup, grow increasingly likely. The consequences of such actions would, of course, be utterly devastating for Venezuela and the region as a whole. The primary task for journalists, scholars, and activists based in the United States should be to unequivocally reject such imperial adventures. One does not need to defend the Maduro administration to wholeheartedly proclaim that the United States has neither the right nor the moral standing to intervene in Venezuela or otherwise tell the country what to do. Additionally, far from “restoring democracy” a U.S.-led or supported military coup would very likely result in a brutal right-wing military regime that would unleash its full fury on Chavista activists and pursue policies beneficial to domestic and foreign elites.

Is there, then, no hope in Venezuela? A sober analysis must recognize that, at present, there is little reason to be optimistic about Venezuela’s prospects in the near and medium future. Yet, dynamics in Venezuela suggest that more optimistic scenarios are not entirely out of the realm of possibility. Far more than the inept opposition and belligerent U.S. government, the greatest source of hope in Venezuela is the popular sectors, who have shown that their support for the government is not unequivocal or unconditional. For example, in December 2017 there were significant popular sector protests in barrios in Caracas and throughout the country, prompted by the government’s failure to deliver promised pernil(roast pork leg) a traditional Venezuelan Christmas special. Earlier in December, grassroots PSUV activists defied party leadership and voted en masse to make communal leader and ANC delegate Angel Prado mayor of the municipality of Simon Planas. The party leadership, however, refused to budge, and in January even placed Prado under investigation.

These examples illustrate that popular sector support for Venezuela’s government will not continue forever. As occurred in the 1989 Caracazo and again in the aborted April 2002 coup against Chávez, the best case scenario is that Venezuela’s future be decided not in the halls of Washington, nor in the gated communities of Altamira, but in the barrios of Petare, Catia, and 23 de Enero. Herein lies the only hope for a genuine solution to the profound problems facing Venezuela, problems that will be resolved neither by a Maduro victory nor a violent coup to remove him.

Gabriel Hetland teaches at the University of Albany and has written about Venezuelan politics for The Nation, Jacobin, Qualitative Sociology and Latin American Perspectives.