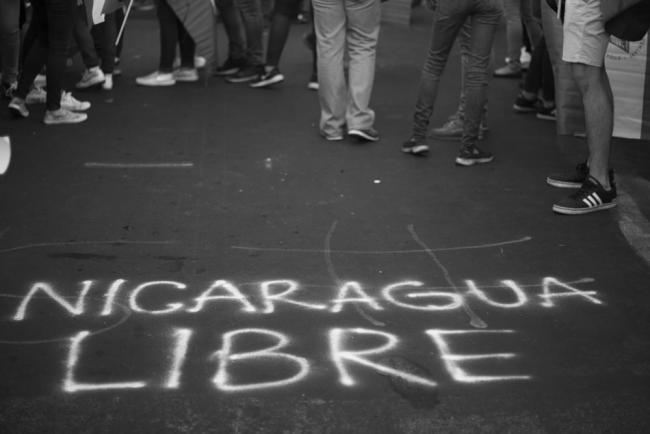 In 1983, I was reading old newspapers in the National Archive of Nicaragua in the basement of the presidential house and seat of the government. Buried in a labor conflict from 1944, I didn’t pay much attention to the conversation that was unfolding a few feet away. Some people were chatting about their families and baseball. I glanced up and I noticed Daniel Ortega talking to the archivist, his assistant and the custodian. He greeted me and then continued talking in the most relaxed manner imaginable for a head of state whose country was at war.

Although I was somewhat critical of Ortega and the Sandinista leadership, he nonetheless made a powerful impression on me as a decent, utterly unpretentious human being. A few days earlier, his brother Humberto, then the Defense Minister also made an indelible impression on me as he bounced our wandering three-year old daughter on his knee in an open-air restaurant.

That memory makes it hard to square with the news reports about Ortega’s active role in the violent repression of anti-government activists. In April, students, some peasants, and others began to protest first against the slow government response to a wildfire in a protected area and then against new social security taxes. The movement then expanded rapidly in response to governmental efforts to crush the protests. Memories of revolution or not, we have to face reality.

As Ortega left the archive on that day in 1983, he commented to the group, “keep up the good work. It is so important for our country.” Over the next few years, as I completed my dissertation research, I looked back on that conversation and thought, “I wish he did care about history.”

As president in the 1980s, Ortega and the rest of the Sandinista leadership subscribed to a view of Nicaraguan history that largely excluded those worker and peasant movements that Augusto Sandino or the Sandinistas had not led. At the time, I saw a direct connection between that view of history and the growing distance between peasant militants who had struggled for land for decades and the Sandinista government.

The electoral defeat of the FSLN, in 1990, in part due to the relative alienation of the peasant bases of the party, led to the unraveling of what had been a fairly homogenous leadership. Much of the Sandinista intelligentsia and high-level leadership broke with Ortega at the Party Congress in 1994. The dissidents, led by former vice president and renowned writer, Sergio Ramírez, complained about a lack of internal democracy that blocked criticism and opposition to Ortega’s control over the FSLN. The dissidents then formed a new party, the Movimiento Renovador Sandinista (Sandinista Renovation Movement, MRS) but had a difficult time entering a serious dialogue with the remaining supporters of the FSLN. Many of those urban and rural workers had gained some measure of voice and dignity during the revolution; most had lost loved ones in the revolution or in the Contra War. By and large, they owed a profound debt of gratitude to the FSLN and thus to Ortega. Sandinista heroes Dora María Tellez, who led the takeover of the National Palace in 1978, and Henry Ruiz, a key guerrilla leader throughout the 1970s and one of the nine commanders in the 1980s who joined Ramírez to head the MRS. Yet they could not penetrate the wall of solidarity that they had helped to build during the 1970s and 1980s: any attack on the FSLN was an attack on the revolution and all that was sacred to the Nicaraguan people. There were no egalitarian, anti-neoliberal social movements with which the MRS could engage and build a party from the bottom up. In 2006, MRS member and popular Managua mayor Henry Lewites might have won the presidential elections but died of a heart attack shortly before the elections. Since that high point, the MRS has not managed to garner significant popular support; that might change with the current revolt.

What then accounts for the increase in support for Ortega between his election in 2006 and 2011? In 2006, he won 38% of the vote, but in 2011 he garnered well over 60%. Former Sandinista intellectuals like Tellez, Ruiz, and others, such as the journalist Carlos Fernando Chamorro, have not been able to offer convincing answers to this question. Nevertheless, they have consistently and bravely denounced the increasingly authoritarian tendencies of the Ortega administration, including the push for constitutional changes to remove term limits. Similarly, they denounced the secretive way in which Ortega approved a project to build an interoceanic canal with a Chinese financier that will affect a great deal of peasant and Indigenous land. Their consistent opposition has given them a degree of legitimacy within the massive protest movement.

Yet it is difficult to ascertain how much support Ortega still has. In the highly questioned 2016 elections, he obtained over 70% of the vote—with abstention rates reported at anywhere from 30%, according to the Supreme Electoral Council, to 70%, according to the main opposition groups.

The usual dismissive comments about “asistencialismo” [the regime’s direct payments to the poor] as the key to Ortega’s support don’t help us very much. Progressives should recall from the 1980s the newfound sense of dignity and empowerment that Nicaraguans felt as they emerged from extreme poverty. Clientelism is and continues to be at work but that is a weak conceptual tool for understanding this new perverse edition of Sandinismo.

Nor does Ortega’s counter-narrative help our understanding, though it does help explain the support of a segment of the international Left whose hatred of U.S. imperialism has affected their capacity for critical thought. Like Venezuelan president Nicolás Maduro, Ortega can justifiably point to the key role of the wealthy elite and the Catholic Church in the opposition. Similarly, they can describe the calls to remove Ortega as a coup against an elected government allied with the Latin American Left. The regime can easily show that some of the student leaders of the Alianza Cívica por la Justicia y la Democracia (Civic Alliance for Justice and Democracy) have entered into dialogue regularly with Republicans such as Marco Rubio and Ted Cruz and with the Salvadoran rightist ARENA party. However obscure its actual role, the U.S. would surely welcome “regime change.”

And the Ortega regime can show images of tens of thousands of supporters at the July 19 celebration, many whom bear the markings of the salt of the earth. Surely many of them think that their journey out of extreme poverty will be stymied if Ortega is thrown out of office. And a recent demonstration featured the loved ones of 21 fallen police. Nothing about the faces of the survivors is pretend. Those images belie the notion that the opposition is unarmed—although there is no support that any foreign or “diabolic” power has supplied them with sophisticated weapons.

Despite its effectiveness, the counter-narrative of the outside threat of violent regime change is profoundly distorted. The opposition is not homogenous: it includes rightists, social democrats, and anarchists, and undoubtedly receives some support from some very dark corners of the hemisphere. There is no telling the outcome of the current struggle or what will happen if they succeed in toppling what the protesters describe as a regime of terror—a regime that has imprisoned hundreds of them. There is incontrovertible evidence that the Ortega government is responsible for the overwhelming majority of over 300 deaths since April. The Inter-American Commission on Human Rights denounced its “excessive and arbitrary use of force.”

Recall Ortega’s comments to the archive workers in 1983. In a sense, to many of his supporters he still has the charismatic aura of historical greatness about him. And yet, in another sense, he demonstrates an ignorance of history and has created grotesque images dripping with historical irony. His armed paramilitary supporters are dressed in blue shirts and called the same.

Has Ortega forgotten “los Camisas Azules,” a pro-Somoza, pro-fascist group from the mid-1930s? Or that, in the late 1970s and 1980s, Salvadoran rightist death squads performed their terrorist acts with hoods covering their heads? Today, eerily similar hoods cover the heads of camisas azules as they shoot at protesters who fight back with homemade arms from behind makeshift cobblestone barricades, replicas of those constructed by Sandinista fighters in 1978 and 1979, in many of the same locations, such as the indigenous barrios of Monimbó and Sutiava, and the eastern barrios of Managua. Is there no shame? No sense of history? And how can the neighboring FMLN (Farabundo Martí Liberation Front) in El Salvador continue to support Ortega, looking at these hooded men shooting protesters? Are they not sickened by the déjà vu?

Today, it seems that the regime has swept away the barricades, called tranques, and perhaps has begun to quell the three-month uprising, at least for the moment. The international Left cannot contribute to a more permanent peace rooted in social justice by providing the regime with a legitimacy that it has squandered in violence. The FSLN, with its 57 years of struggle and resistance must now remake itself—cobblestone by cobblestone.

Jeffrey L. Gould is the James H. Rudy Professor of History at Indiana University and former director of the Center for Latin American and Caribbean Studies. He is author and co-author of numerous books on Central America and Nicaragua, including Desencuentros y Desafíos: Ensayos Sobre la Historia Contemporánea Centroamericana (CIHAC, 2016) and To Rise in Darkness: Revolution, Repression, and Memory in El Salvador, 1920-32 (Duke University Press, 2008), co authored with Aldo Lauria; and To Die in This Way: Nicaraguan Indian Communities and the Myth of Mestizaje, 1880-1965 (Duke University Press, 1998). He has also directed and produced several documentaries on El Salvador. He was the recipient of a John Simon Guggenheim fellowship in 2002, and served a fellow at the Institute for Advanced Study at Princeton in 2012-2013. Last year he was a fellow at the Charles Warren Center at Harvard University. His book Solidarity Under Siege: the Salvadoran Labor Movement, 1970-1990 (Cambridge University Press) is forthcoming.