From Brazil to Mexico, A Cautionary Tale 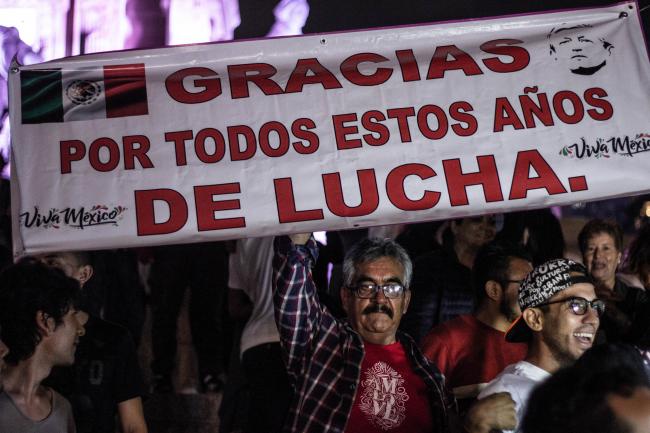 The current political moment in Mexico, with Andrés Manuel López Obrador soon to take office as president, has much in common with a similar moment in Brazil—when Luiz Inácio Lula da Silva was elected to that country’s highest office in 2002. Both Lula and López Obrador represented a left-wing shift in their respective countries’ politics, which generated anxiety among elites. Both campaigned on promises to tackle corruption and economic inequality. And perhaps most important, in both moments, many in Brazil and Mexico hoped that their incoming governments would enact true social change.

These parallels beg the question of what Mexico’s next president can learn from his Brazilian counterpart. One lesson is that López Obrador should question the efficacy of following a moderate, centrist path of enacting change. Recent developments in Brazil show that such a political approach, based in avoiding structural problems and seeking compromise with elites, empowered Lula’s opponents. Now, Lula’s opposition is dismantling the reforms his government made when he was in power.

Prior to becoming president, Lula was central to the mass protests that ended Brazil’s military government in the early 1980s. His Workers’ Party (PT) was filled with other leftist unionists as well as radical clergy members and social movement leaders. From its start in the late 1970s, the PT looked to communist Cuba for inspiration. Yet, over the course of the 1980s and 1990s, the PT embraced centrist positions to draw in more voters. Instead of demanding socialism, Lula and the PT sought to improve Brazil’s social welfare programs. And in seeking compromise to ease the concerns of business elites, Lula selected José Alencar, a business leader of the center-right Brazilian Democratic Movement Party (PMDB), as his running mate in 2002. Once in office, Lula accommodated instead of confronted elites over controversial policies such as agrarian reform. This is why when compared to his predecessors, Lula redistributed less land to the social movements that had supported his electoral ambitions since the early 1980s. Still, while Lula was in power, Brazil experienced many progressive changes, including a reduction in economic inequality, a growth in the country’s middle class, and relative political stability.

The story of Lula’s and the PT’s moderate evolution does not end well for the Brazilian Left. Lula is now in jail, convicted in the largest corruption scandal in Brazilian history, which has also implicated and investigated dozens of representatives from the PT and many of Brazil’s other parties. Lula and his supporters claim the corruption charges are politically motivated and designed to sabotage his run for president, which polls indicate he would win. Furthermore, many have noted the dubious measures to secure Lula’s conviction, including the use of unconstitutional means to acquire evidence and a lack of reliable testimony.  What Lula’s case shows is that clearly separating political loyalties from the rule of law is next to impossible in Brazil’s increasingly polarized society.

Lula’s downfall occurred after his successor, Dilma Rousseff, elected president with the PT in 2010, was removed from office in 2016 after a politically-charged Senate impeachment trial led by her opponents. Among those who ousted her from power was her vice-president, Michel Temer. Following Lula’s accommodationist style, Rousseff chose the PMDB’s Temer as her running mate. When Brazil’s economy began to stall in 2014, Temer and others from his party distanced themselves from Dilma, in an opportunistic move to secure the presidency. The PMDB eventually voted to abandon its electoral coalition with the PT, costing Rousseff vital support in staving off the impeachment bid. Currently, Temer’s government intends to cut spending for social security and privatize airports, the postal delivery service, and public utilities.

The political direction of the Brazilian Left is unclear. Lula, Brazil’s most popular politician, was planning on running once again for president in this year’s October elections before he was sent to jail. Now, it is uncertain if his candidacy is viable as multiple legal attempts to free him from jail have failed—though efforts are still unfolding. Regardless, the PT has decided to unite behind his run for office. Still, even if Lula can win and take office, what will be his approach? While many on the left have mobilized to support him, it is unclear if Lula will return to his former radical self who sought sweeping redistributive economic reforms. Meanwhile, when Lula is excluded from the race, the presidential frontrunner is the far-right nationalist, Jair Bolsonaro, who not only openly praises dictatorship, but also routinely uses misogynistic, racist, and xenophobic language to mobilize support.

What’s the lesson? Lula and the PT moderated their political positions over the course of a few decades. Now, the party’s accomplishments are being undone by some of the very actors that Lula and Rousseff accommodated. Today, some of Brazil’s most repugnant right-wing leaders are gaining support as the country’s political Left struggles.

Shifting the focus to Mexico, López Obrador’s incoming government has the potential to make significant changes to Mexican society. This is possible due to the nature of López Obrador’s electoral coalition and the disdain that Mexicans have for their governmental institutions.

López Obrador’s political party, the National Regeneration Movement (MORENA), the dominant player in the Together We Will Make History (Juntos Haremos Historia) coalition, is new to representative government. The coalition features two other political parties, the Social Encounter Party (PES) and the Labor Party (PT). López Obrador launched MORENA after his second failed presidential run in 2012 with the the Democratic Revolutionary Party (PRD). His break from the PRD came as its party leaders accepted Enrique Peña Nieto as President in 2012, despite allegations of electoral fraud. MORENA first successfully ran candidates for office in 2015 when it won 35 seats out of the 500 in Mexico’s lower house, the Chamber of Deputies. At this time, none of Mexico’s 128 senators were from MORENA. The PES and the Mexican Labor Party were also minor players under the previous government, with just 19 senators and 12 representatives between the two parties.

Besides winning the presidency with 53 percent of the popular vote, when López Obrador assumes power on December 1, his electoral coalition will have 70 seats in the Senate, with MORENA taking 55, the Labor Party claiming six, and PES carrying nine. Additionally, the coalition in the Mexican lower house will have 303 of the chamber’s 500 seats, with MORENA earning 185 seats, the Labor Party taking 62, and representatives from the PES occupying 56 seats. In just three years, these parties went from fringe actors to controlling Mexico’s legislative and executive branches of government.

Meanwhile, Mexicans have shown an overwhelming disdain for current president Enrique Peña Nieto of the Institutional Revolutionary Party (PRI), who at one point had a 17 percent approval rating. More tellingly, in a survey conducted across 38 different countries in 2017, the Pew Research Center found that 93 percent of Mexicans were not satisfied with their country’s democratic institutions. Their discontent is particularly focused on the established political parties, which include the PRI, the PRD, as well as the National Action Party (PAN). More so than any other people in Latin America, Mexicans are ready for dramatic social change.

This veritable collapse—principally in terms of the faith that the people have in Mexico’s traditional governing parties—presents an opportunity for López Obrador’s somewhat undisciplined electoral coalition. Compared to Lula’s PT, which steadily moderated its political approach for decades, MORENA is a relatively new political actor. MORENA drew many different people into its ranks in a short period of time, including members of the PRD, PAN, and the PRI, who flocked into MORENA’s ranks earlier this year on more than one occasion. One of the parties in López Obrador’s coalition, PES, is an evangelical conservative party that opposes marriage equality and abortion rights. It also includes soccer star-turned-politician Cuauhtémoc Blanco, who just became the governor of the state of Morelos, who was accused of electoral fraud two years ago. Add to this political mix MORENA’s many committed leftists who have continued to express support to Venezuela under Nicolás Maduro. Of course, there is Obrador himself, who isn’t quite a political outsider. Such diversity begs for unity in terms of policy and ideology. The opportunity is for MORENA to provide direction for its electoral coalition, as well as for Mexico. What has the potential to bind together the representatives that will work in López Obrador’s incoming government is his promise to transform Mexico by ending corruption, engineering domestic economic development, and improving public safety. Such goals are vague, but also potentially revolutionary.

López Obrador’s objectives call for seriously questioning orthodox approaches to law enforcement, economics, and governance. The need is for bold experiments in political action, which may entail land redistribution and new agricultural investment initiatives, reversing Peña Nieto’s neoliberal energy reforms, breaking up the few companies that dominate Mexico’s telecommunications industry, as well as amending the Constitution. More so than any other country in the region, Mexico is ready to consider such changes, as MORENA’s electoral coalition has the chance to advance a bold agenda given its electoral majorities in both chambers.  At the same time, such hopes could easily be dashed. López Obrador’s cabinet selections and some of the policy proposals thus far display a centrist, orthodox approach. Others have noted that Obrador has neither seriously threatened private property, nor has a radical program to confront poverty. Apparent agreements with key elites in Mexico’s business community, likewise, parallel Lula’s efforts to calm powerful economic players through making concessions.  Still, Brazil’s example illustrates that to pursue centrist policy objectives does not lead to real and lasting social change. Following the political status quo would squander this unique opportunity in Mexican history. When the left took power and Brazil hoped for change, Lula made compromises. Now, Brazil is suffering. The lesson for Mexico: centrism and accommodation fail to generate true change. The present moment is the time for bold political experiments.  The Mexican people are ready. The question is—will AMLO deliver?

Anthony Pahnke is a Professor of International Relations at San Francisco State University. His research covers development policy and social movements in Latin America. He can be contacted at anthonypahnke@sfsu.edu