The election of neo-fascist Jair Bolsonaro in Brazil has consolidated a rapprochement between the Americas’ two largest countries, with President Trump eager to befriend him. 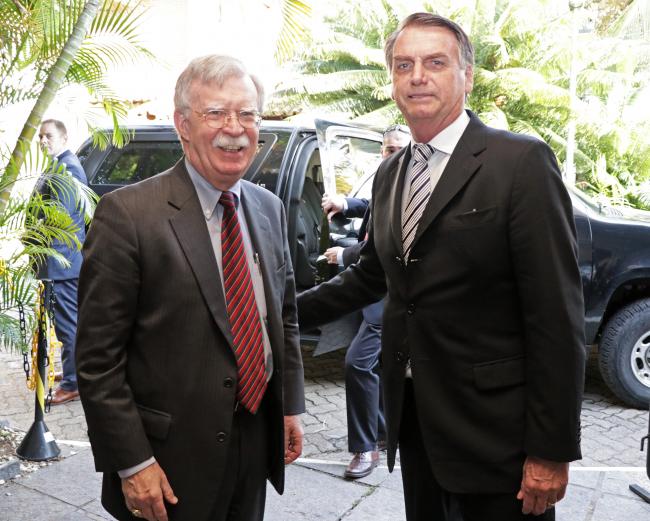 Donald Trump is a reliable friend to authoritarian despots, and he recently found a new bedfellow. Brazil’s new president, Jair Bolsonaro, has a history of outrageous comments on everything from Indigenous and LGBT rights to democracy itself that make Trump look statesmanlike in comparison. Trump appears unconcerned with aligning himself with such hate speech. “Congratulations to President @JairBolsonaro […],” he tweeted on January 1, when Bolsonaro took office. “The U.S.A. is with you!” Bolsonaro responded effusively: “Dear Mr. President @realDonaldTrump, I truly appreciate your words of encouragement. Together, under God’s protection, we shall bring prosperity and progress to our people!”

The emerging “bromance” between the right-wing presidents of the Americas’ largest countries is in line with the friendly relationships Trump has developed with leaders like Iván Duque of Colombia and Mauricio Macri of Argentina. In the case of Colombia, the areas of cooperation between the U.S. and its most stalwart ally in the region are the same as ever—counternarcotics, counterterrorism, and continued opposition to the government of Venezuela.

Trump’s relationship with Bolsonaro is different, however, in that Brazil has seldom been a consistent U.S. ally. The countries have sparred over issues such as trade, Brazil’s pursuit of nuclear energy in the 1970s, and the country’s desire to take a leadership position in Latin America. Under presidents Luiz Inácio Lula da Silva and Dilma Rousseff, the relationship between the U.S. and Brazil was frequently strained. Brazil sought alliances with other leftist governments in the region and increased trade with China and other BRICS countries, while playing a key role in torpedoing Washington’s aspiration for a Free Trade Area of the Americas. After the 2016 parliamentary coup that removed Rousseff, the new president, Michel Temer, sought to mend fences with the U.S. through measures like expanding access to Brazil’s offshore oil deposits for foreign companies.

The connection between Macri and Trump seems related to the presidents’ shared histories, dating back to Trump’s real estate dealings with the Argentine president’s father in the 1980s and 1990s. Macri and Trump are both pampered businessmen and millionaires, and share a long track-record of shady business practices and opaque finances. However, the scandals surrounding Macri seem to have had little effect on his popularity, much like Trump. Yet Trump’s personal style is much more aligned with that of Bolsonaro than with that of the patrician, measured Macri. For example, Trump chafes at—and perhaps simply does not understand—the limitations imposed by American institutions; Bolsonaro once said that if he were ever elected president, he would carry out a coup his first day in office. Trump boasts of sexual assault; Bolsonaro told a colleague that she wasn’t worthy of being raped by him. Both are zealous climate change deniers, with Bolsonaro rescinding Brazil’s offer to host UN climate talks this year. Both spout blatant falsehoods and paint negative coverage as “fake news.” Both are energized by bases of adoring followers (called “bolsominions” in Brazil) who revel in their leaders’ outlandish behavior.

Still, the relationship between Bolsonaro and Trump goes deeper than shared authoritarian leanings or right-wing policy positions. What is it about Bolsonaro that Trump finds so appealing? And what factors explain Bolsonaro’s fawning admiration for both Trump and a country that successive Brazilian governments from across the ideological spectrum have kept at arm’s length? Given Trump's ignorance of foreign policy, his embrace of Bolsonaro is likely based on a cursory interpretation of sound bites that paint the Brazilian leader as a politician made in his own image. But those around Trump are certainly aware of economic possibilities under the new regime. Bolsonaro and his finance minister, University of Chicago-educated Paulo Guedes, have indicated that they will expand upon the opening of the Brazilian economy begun by Temer. “Privatize everything,” Guedes has said. With vast offshore oil deposits to be exploited, state-owned companies like aircraft manufacturer Embraer to be snapped up, there is money to be made for American businesses. That’s not to mention unexplored mineral riches beneath the Amazon basin as Bolsonaro strips away environmental protections one by one. Maintaining a good relationship with Bolsonaro will ensure the U.S. priority access to these resources.

Perhaps the most alarming element of the emerging “bromance” is that it shows that some world leaders see Trump as worthy of imitation. Clearly, Bolsonaro’s cozying up to Trump and others in his administration is part of a strategic move to find allies abroad. Given that the international media has widely highlighted his bigotry, Bolsonaro needs friends. Global connections work as powerful currency in a country whose elites have always looked abroad for their intellectual and cultural cues, and validation from any U.S. president brings legitimacy. Social media adds an additional layer. For Bolsonaro’s followers, congratulatory tweets and photo-ops with U.S. officials work as shareable evidence of the recognition being offered by a superpower whose respect they crave.

Trump and Bolsonaro are renewing a relationship built not on equality, but on the bedrock of American dominance in the region. This came to the fore when Bolsonaro saluted U.S. National Security Advisor John Bolton at a meeting shortly after this election. The subservience the salute suggested ran directly counter to his campaign slogan, “Brazil above all, God above all,” itself a slightly more religious riff on Trump’s “America First.” Bolsonaro’s followers, however, seem content to overlook the way in which such deference runs counter to the ultra-nationalism of his rhetoric if it means gaining kudos from Trump.

To understand the roots of Bolsonaro’s admiration of Trump, we must turn our attention to Brazil’s middle and upper classes, many of whom have long venerated the United States and Europe, an admiration related to Brazil’s 19th-century racist aspirations for a whiter and “more civilized” nation. The expression complexo de vira-lata (mutt complex), refers to the inferiority complex that Brazil suffers when measuring itself against the whiter, more powerful countries in North America and Europe. For Brazil’s elite, the cause of this inferiority is their country’s mixed racial heritage. This deep-seated resentment has not usually been expressed openly in Brazil, but it has always simmered just below the surface and has historically shaped policy in key ways. Today, many Bolsonaro supporters are giving voice to their racism and classism far more shamelessly, and they have found an affinity in Trump’s disdain for people of color, immigrants, and Muslims.

Befriending Trump might also be read as an attempt to neutralize outrage about Bolsonaro abroad, particularly from scholars, Brazilian activists based outside of Brazil, and portions of the foreign media. Bolsonaro and Trump can identify their enemies as the same threatening “leftists” and “liberals” who attack Trump and who Bolsonaro has promised to “purge.” The newfound connection between Trump and Bolsonaro creates a false sense of shared purpose that gives credence to idea of a global left-wing conspiracy that is useful for both leaders.

The nascent alliance between the far-right presidents of the Americas’ two largest countries is profoundly worrisome, particularly as Trump solidifies ties with right-wing autocrats from the Philippines to Hungary. Now, more than ever, is the time for those in the U.S. and Brazil who value democracy, the rule of law, tolerance, and diversity to speak out against the convergence of sinister interests that bind the two leaders together.

Erika Robb Larkins is Associate Professor of Anthropology and Sociology and Director of the J. Keith Behner and Catherine M. Stiefel Program on Brazil at San Diego State University.

Bryan Pitts is Associate Director at the Center for Latin American and Caribbean Studies at Indiana University Bloomington.