Is Guatemala a “Safe Third Country” for Disposable People?

Contrary to its name, the Safe Third Country Agreement continues a legacy of exploitation for Indigenous and working class peoples in Central America. 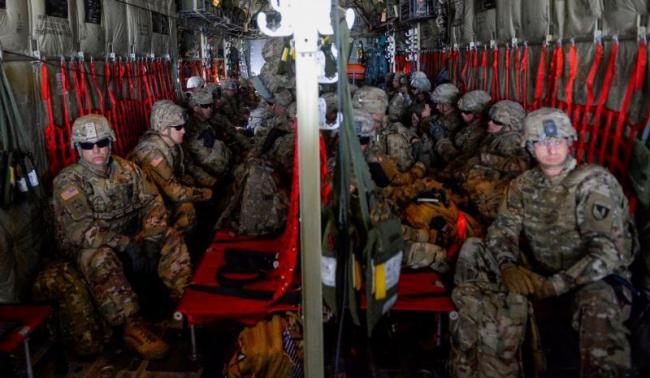 On July 26, President Donald Trump towered over Guatemalan interior minister Enrique Degenhart and U.S. interim secretary of homeland security Kevin McAleenan as they sat to sign the Safe Third Country agreement. Behind them, in the White House’s Oval Office, hung a perfectly placed portrait of Abraham Lincoln, reminding us that the “agreement” was signed under the disciplinarian eye of the U.S., both past and present.

The Safe Third Country agreement will make migrants who have passed through Guatemala ineligible for protection in the United States. Instead, they would be required to request asylum in Guatemala. Further, those who manage to make it to the U.S. will be deported back to Guatemala, which has been deemed a “safe place” to live.

The details of the agreement remain murky and lack transparency. For instance, it is still not clear how the United States and the Guatemalan government will offer “safety and security” for thousands of migrants, when Guatemala is unable to provide health care, education, housing, food, and security for the vast majority of its population, and especially its Indigenous peoples. It is also still unclear as to whether these regulations would apply to Guatemalans seeking asylum. Additionally, it is still unclear when this agreement will go into effect given that it has not been approved by the Guatemalan congress. Nevertheless, the signing of this agreement under threats by the Trump administration to block Guatemalan exports and enact tariffs on remittances signals the U.S.’ continued strategy of coercion, rather than cooperation, with Central American nations. This strong-arming encapsulates the legacies of colonialism in the region that continue to dispose and eradicate Indigenous working peoples and the working class in Central America.

The coercion is not new. The U.S. has historically viewed Central America as a site of production and expansion for its own economic and political interests, and acted accordingly through frequent interventions. Even so, the signing of the agreement demonstrated not just another example of U.S. imposition, but also the complicity of Guatemalan president Jimmy Morales and the Guatemalan oligarchy. Just as past dictators sold land and labor for a cut of U.S. profits, complicit members of Central American governments continue to sell off land and resources, impacting Indigenous communities throughout the Central American isthmus. The Safe Third Country Agreement continues this tradition by paving the way for corporations to profit off private detention camps that could be built in Guatemala, by ensuring the continuation of unrelenting militarization of Central American borders, and by locking Indigenous people and other migrants into the violent conditions they are attempting to escape. As always, the victims are Central America’s working poor and Indigenous peoples, who continue to face violent dispossession and disposability.

Although the Safe Third Country agreement would have devastating consequences for Central American migrants—as well as migrants coming from other countries with colonial legacies such as Nicaragua, Haiti, Venezuela, Cuba, Brazil, and West African countries—one of the most invisible and affected groups will continue to be Indigenous communities, and specifically the Maya. The forced displacement of Mayas to the United States is the result of severe socio-political inequalities and systemic violence that governments, corporations, and elites have inflicted on Indigenous peoples with complete impunity since the colonial period. Additionally, after the disproportionate murder of Maya populations by U.S.-backed state forces during the 36-year Guatemalan civil war—of the over 200,000 civilians killed, 83 percent were Maya and 93 percent of the murders were committed by state forces—the expansion of extractive industries such as gold mining and hydroelectric dams in the wake of the peace accords has continued to displace Mayas from their ancestral lands. These projects have moved into Maya territories with the same viciousness of the civil war, continuing the killing, kidnapping, enforced disappearance, and displacement.

The Safe Third Country Agreement will further reduce the Mayas’ already limited access to healthcare, education, housing, food, and jobs, since the Guatemalan government will be forced to address the immediate needs of thousands of migrants before those of its own population. These extremely precarious conditions could force more Mayas to leave their territories and migrate to the United States. Furthermore, the Safe Third Country Agreement sets up yet another barrier to seeking asylum, not only for Maya and other Indigenous peoples in Guatemala, but also for the thousands of Indigenous migrants across the region facing similar forms of systemic violence and displacement, including Garifuna, Tolupanes, and Lencas in Honduras and others in El Salvador.

The narrative surrounding Central American migration not only homogenizes migrants into an indistinguishable mass, but also contributes to the systemic violence and discriminatory practices against displaced Maya migrants. The majority of Guatemalans migrating to the United States are Mayas from regions subject to the U.S.-sponsored genocide. Maya migrants who have arrived at U.S. borders are subject to extreme discrimination, including lacking access to adequate court interpreters and facing disproportionate rates of violence at the hands of CBP and ICE officers, as evidenced by the number of Guatemalan Maya children who have died at ICE detention centers: Jakelin Caal Maquin, Felipe Gómez Alonzo, Wilmer Josúe Ramírez, Carlos Gregorio Hernández, and Juan de León Gutiérrez. Mayas, and other Indigenous migrants, also face violent forms of discrimination from non-Indigenous migrants, smugglers and state authorities from every country they reach.

The Safe Third Country agreement itself is illegal, as it has not been approved by the Guatemalan congress and has defied a Constitutional Court injunction, although the United States has touted it as a step forward in solving the migration crisis. By making Guatemala a “safe third country,” these governments are trapping migrants in a region where violence is a normalized condition of life, upward mobility is impossible, and opportunities are scarce.

The disregard for migrant quality of life does not end with the U.S. and Guatemalan political leadership, though, but extends to the media and other regional experts. For example, a recent article in the Economist states, “Guatemala may be poor, but the right to asylum is a right to freedom from persecution, not freedom from poverty or misery.” Statements such as these prove a dangerous lack of understanding of not only Guatemala, but all of Central America. Guatemala is home to widespread persecution. For instance, a recent report by the NGO Global Witness found a fivefold increase from 2017 to 2018 in the murder of Guatemalan activists—particularly of Maya land and environmental defenders—making the country the bloodiest per capita in the world for environmental rights defenders. Furthermore, Central American nations boast the highest rates of poverty in the region, with Guatemala and Honduras at over 60 percent and El Salvador at over 34 percent. In Central America, “poverty and misery” are a direct result of US-backed political and economic violence that has systematically dispossessed Guatemalans, and especially Indigenous peoples. Thus, persecution and poverty cannot be disentangled—they operate hand in hand.

Yet the Trump administration claims that refugees will not only be safe, they will also receive due process in Guatemala. At the signing, Interim Homeland Security Secretary Kevin McAleenan stated,  “If you have a Honduran family or an El Salvadoran national, instead of them having to pay a smuggler, come all the way to our border to seek asylum, when they arrive in Guatemala they’re in a country that has a fair proceeding for assessing asylum claims.”

The agreement echoed this sentiment, arguing that “private violence is not pervasive across the entirety of each northern triangle country,” meaning that migrants would have to seek internal relocation in their own home countries before filing for asylum in the U.S., and that failure to do so would be suitable grounds for rejecting asylum.

Guatemala, however, is not a safe country for those seeking refuge. Our own research interviews with migrants and leaders revealed that the mass exodus of Guatemalans, Hondurans and Salvadorans is happening because their states cannot protect them. Guatemala is no safer than Honduras and El Salvador. The social contract between politicians and civil society has been broken so many times since the peace accords were signed that people no longer believe their countries are improving or have the capacity to improve. This underlines the extent to which recent shifts in U.S. immigration policy seal off one of the few alternatives for vulnerable Central Americans seeking a lifeline to escape violence, impunity, and displacement due to extractive industry encroachment and the lack of economic opportunities.

According to a statement by the Guatemalan Civil Society Liaison Group on Migration (GASCMM) and the Regional Network of Civil Organizations for Migration (RROCM), Article 7 of the Safe Country Agreement will promote national security cooperation between the two countries, and not human rights. The same report notes that U.S. funds for “security” translate into militarization, which will contribute to discrimination and violence instead of protection for people seeking asylum and refuge.

More alarming, Article 3 of the agreement states that people caught at the U.S.-Mexico border will be deported to Guatemala to solicit and process their asylum applications. Yet there is no explanation of the processes and mechanisms which will be used for asylum in the U.S. versus the third country. According to the United Nations High Commission for Refugees, of the 869 refugee applications filed in Guatemala between 2002-2017, only 370 were recognized. Aside from the other critiques of the agreement, Guatemala does not have the institutional capacity to do what the Safe Third Country Agreement demands of it.

The only observable instance in which these governments care about migrants is the continued positioning of migrants as exploitable labor in the United States. In his comments on the agreement, Trump boasted of the expansion of H-2A visas for agricultural labor. Thus, migrants’ acceptability depends on their exploitability. If migrants are able to escape the violence of their home countries only to be trapped as exploitable labor in the United States, which state will ensure their civil rights?

Dr. Linda Alvarez is an assistant professor of political science at California State University, Northridge. Her research revolves around neoliberalism, violence and migration, as well as race and ethnic politics. Born in Los Angeles, she is the daughter of Costa Rican migrants. Her email is linda.alvarez@csun.edu and her Twitter is @LindaAlvarezPhD.

Dr. Suyapa Portillo Villeda is an associate professor of Chicano/a Latino/a transnational studies at Pitzer College. She spent 2018 on a Fulbright Scholar Fellowship in Honduras studying historical roots of migration, including LGBTI and women migration, from the perspective of the home country. She is a Honduran immigrant living and writing in the U.S. Her email is suyapa_portillo@pitzer.edu and her Twitter is @SuyapaPV.

Dr. Alicia Ivonne Estrada was born in Guatemala and raised in Los Angeles and is a professor of Chicana/o studies at California State University, Northridge. She has published on the Maya and Guatemalan diaspora in Los Angeles as well as on contemporary Maya literature, film, and radio. Her email is alicia.estrada@csun.edu and you can find her website here.